A white man who stopped the AFL using the Aboriginal Flag in the code’s Indigenous Round was once fined $2 million for selling ‘authentic’ didgeridoos and boomerangs – that were actually made in Indonesia.

A picture shows Ben Wooster and business partner Semele Moore smiling happily with the flag’s original designer Harold Thomas after their company, WAM Clothing, was given copyright license to the iconic symbol in 2018.

Mr Thomas designed the famous flag in 1971 – and in 1997 won a High Court battle to become the sole copyright owner – but in 2018 signed over clothing license rights to WAM Clothing.

This means WAM Clothing collects fees from its use, and then passes a portion of the money back to the Mr Thomas.

It also means that without the consent of Mr Wooster and Ms Moore, the flag cannot be used on clothing or in any media.

The AFL this week announced it wouldn’t be using the most obvious and famous symbol of Aboriginal Australia as part of its Indigenous Round because they had been unable to secure a deal with the co-owners.

Mr Wooster is a disgraced businessman whose former company was fined $2.3m for claiming art was Aboriginal when it was actually made in Indonesia, while Ms Moore was a paralegal at a leading Brisbane law firm before founding WAM Clothing. 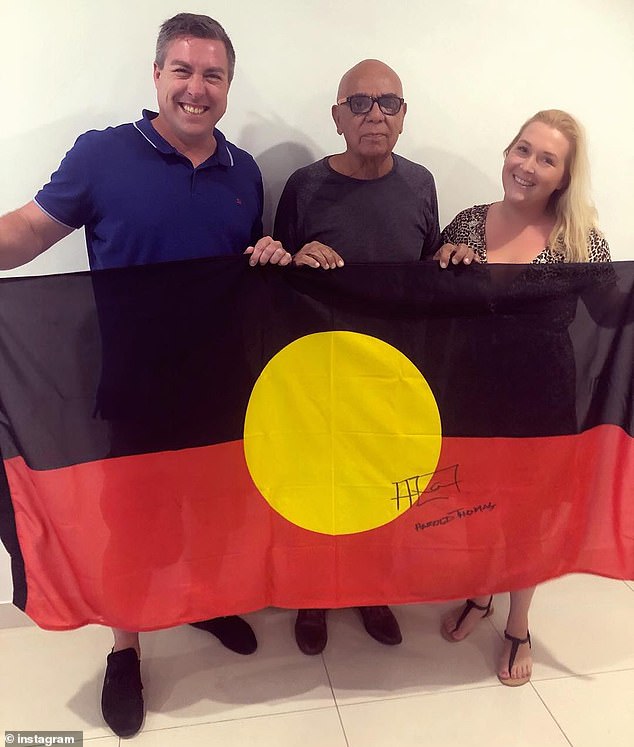 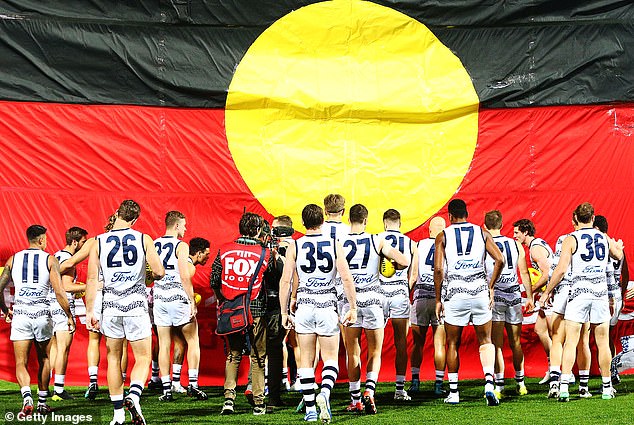 The AFL was this week unable to reach a deal with WAM Clothing to paint the Aboriginal Flag on the the ground for its Indigenous Round. This led to outrage that the rights to who can and cannot use the flag are controlled by a non-Indigenous company

Ms Moore told Daily Mail Australia that when it came to the question of whether use of the flag should be controlled by companies, that was a matter for its designer.

‘Harold Thomas is the copyright owner and he can enter into deals with whoever he likes,’ she said.

‘There was a previous clothing licensee, it was an Indian company, but Harold wasn’t happy with the work they were doing and so he approached my business partner (Mr Wooster) who he had been working with previously.’

WAM Clothing controls the copyright license for clothing and media, which includes the flag being painted on an AFL ground.

Should copyright of the Aboriginal Flag be controlled by a company?

This is despite one of Mr Wooster’s former companies being fined $2.3 million for claiming to sell ‘authentic Aboriginal Art’ which was actually mass produced in Indonesia.

‘Birubi’s actions were extremely serious. Not only did they mislead consumers, they were liable to cause offence and distress to Australian Aboriginal people,’ Australian Competition and Consumer Commissioner Sarah Court said.

‘Engagement in the Indigenous Australian art industry is extremely important to a significant number of Australian Aboriginal people, especially those in remote regions.

‘The ACCC took this action because the misleading conduct has the potential to undermine the integrity of the industry and reduce opportunities for Australian Aboriginal peoples.’

In the aftermath of the ACCC ruling, Mr Wooster deregistered his Birubi company.

Its owner Mr Wooster did however issued a statement to 60 Minutes in 2018 saying their products were made by an Indigenous artist.

‘Claims that Birubi Art’s artist… is not Indigenous are completely untrue,’ he said.

‘Confirmation of Aboriginality has been provided to… by the… Local Aboriginal Land Council.’ 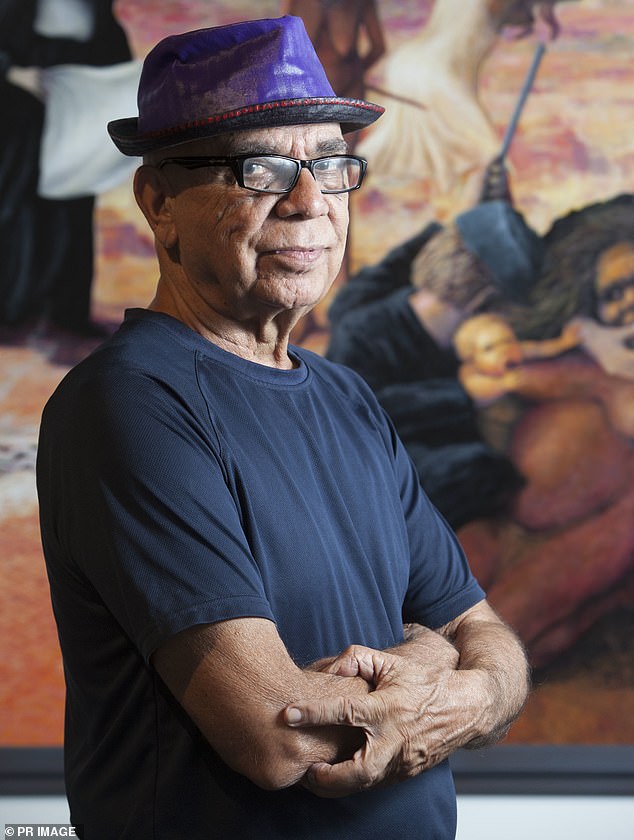 Mr Thomas designed the famous flag in 1971 and in 1997 won a High Court battle to become the sole copyright owner, before passing the copyright licenses for different products on to other companies 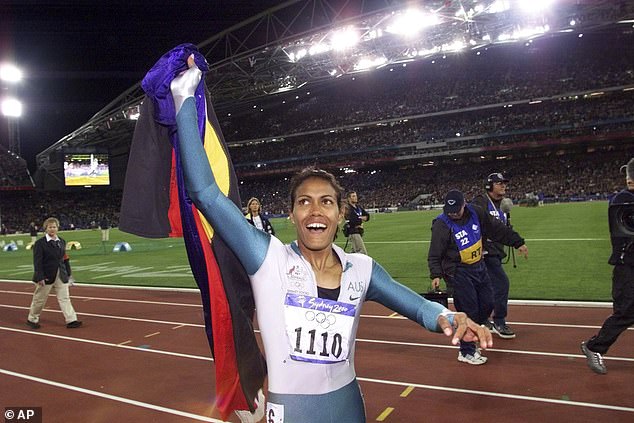 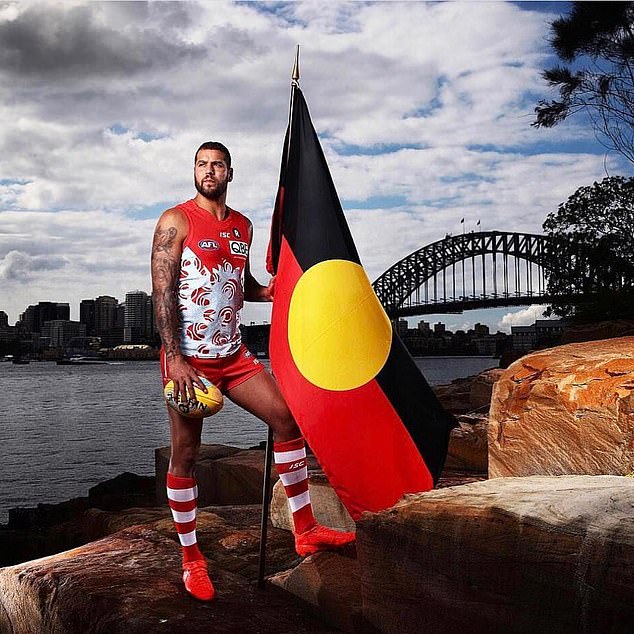 Ms Moore said while no agreement would be reached about painting the flag on the field for this weekend’s AFL games, discussions about its use on clothing continued.

‘We’re in ongoing discussions with the AFL,’ she said.

She did not reveal how much the AFL was quoted to paint the flag onto the grounds for this weekend’s match, but the league refused to go ahead with a deal regardless.

The move has led to anger and outrage from prominent Indigenous names including sports stars Nova Peris and Lance Franklin, who had his own run in with the company last year.

Franklin chose to license the use of the flag off WAM for his personal clothing brand, a move that saw him come under fire.

In response the Sydney Swans star said he was ‘deeply disturbed’ by the attacks on him, pointing out that going through WAM was the only ‘legal’ way to use the flag.

Peris, a former Olympic gold medalist and Federal Senator, slammed the fact a non-Indigenous couple could own the rights to the flag.

She is championing a call to ‘free the Flag’ with more than 90,000 people signing an online petition to stop its use from being controlled.

‘We’re held to ransom for money over the pride of all Australian people.’ 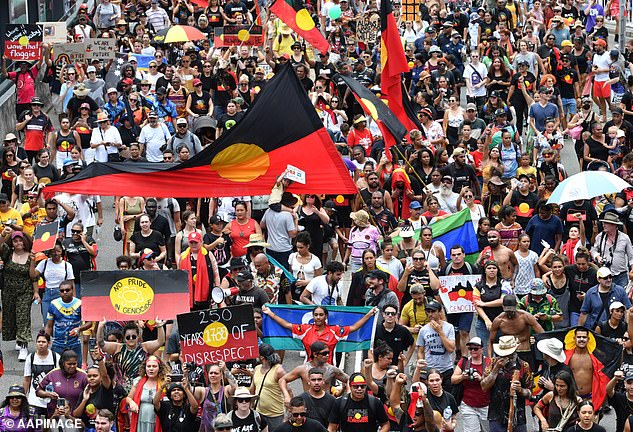 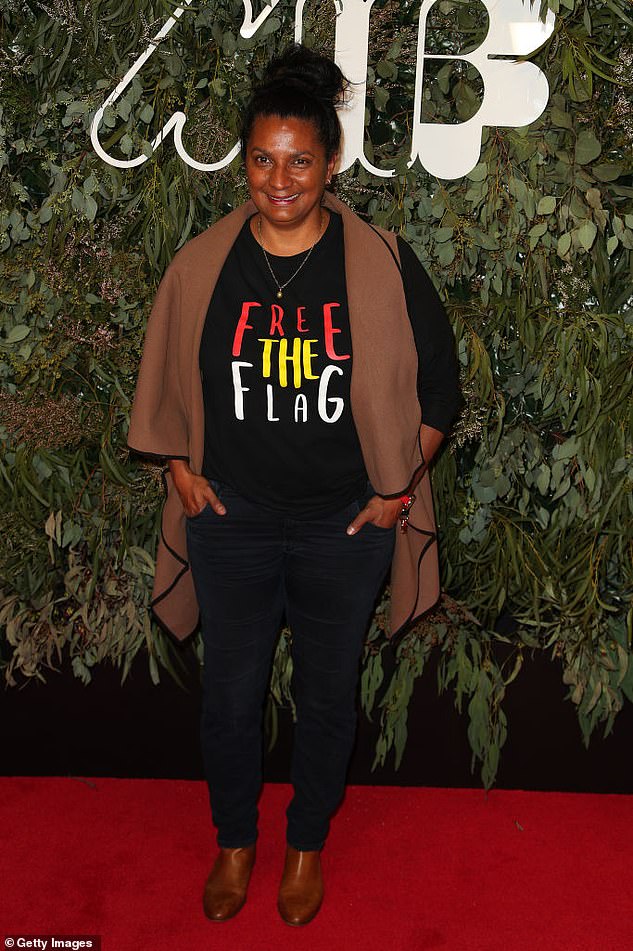 Nova Peris (pictured), a former Olympic gold medalist and Federal Senator, slammed the fact a non-Indigenous couple could own the rights to the flag. She is championing the push to ‘free the flag’ so that the right to use it is not limited

The AFL has a proud history of Aboriginal players dating back to the early 1900s with some of the game’s biggest current day stars of native heritage.

WHAT DOES THE FLAG REPRESENT?

BLACK: represents the Aboriginal people of past, present and future

RED: represents the earth and a spritiual relationship to the land

Of extra significance this year, the annual Dreamtime game between Richmond and Essendon will be played in Darwin.

Essendon Aboriginal champion Michael Long admitted he ‘didn’t believe it’ when he heard the AFL could not reach an agreement to use the flag as part of celebrations.

‘I didn’t believe it when I first heard about it. I didn’t think it was real. It is a disgrace,’ Long said.

‘That flag belongs to all Aboriginal people – not just to any individual.

‘We are having the biggest game ever here in Darwin as part of Indigenous round and that flag is really symbolic.

‘It’s something that we fought for with the racial vilification of players who played the game and athletes like Nova Peris and Cathy Freeman – they have flown the flag for Aboriginal people.’

Toll keen to emphasise the positives in tough times

Toll keen to emphasise the positives in tough times