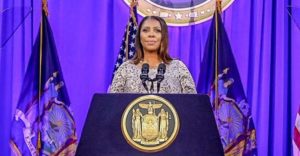 New York Attorney General Letitia James announced that there has been a lawsuit filed against the New York City Police Department (NYPD) and its leadership after an extensive investigation. The lawsuit has been filed to end NYPD’s pattern of excessive force and making false arrests against New Yorkers during peaceful protests.

In the complaint, Attorney General James specifies the NYPD’s illegal and harmful conduct against New Yorkers who engaged peacefully during recent racial justice protests. It has been proved for years that the actions of NYPD officers has led to significant injuries and violated individuals’ basic right to peacefully protest. The litigants in the lawsuit are listed as: the NYPD, the City of New York, Mayor Bill de Blasio, NYPD Commissioner Dermot Shea and NYPD Chief of Department Terence Monahan. The entities and people named are charged with failing to address this “longstanding pattern of abuse by not properly training, supervising, and disciplining officers to prevent misconduct, despite knowledge and public admission that it violated the rights of New Yorkers.”

“There is no question that the NYPD engaged in a pattern of excessive, brutal, and unlawful force against peaceful protesters,” said James in a written statement. “Over the past few months, the NYPD has repeatedly and blatantly violated the rights of New Yorkers, inflicting significant physical and psychological harm and leading to great distrust in law enforcement. With today’s lawsuit, this longstanding pattern of brutal and illegal force ends. No one is above the law—not even the individuals charged with enforcing it.”

Attorney General James gave dozens of examples of the NYPD’s blatant use of excessive force and other misconduct that has occurred since May 2020. They include the indiscriminate, unjustified and repeated use of batons, pepper spray, bicycles, and a crowd-control tactic known as “kettling” against peaceful protesters. Those tactics have led to signifiant physical harm to protesters. While in their duty, NYPD officers have also unlawfully arrested legal observers, medics and other workers performing essential services without probable cause and in direct violation of executive orders from Mayor de Blasio.

The filed lawsuit is seeking broad injunctive relief, including systemic reforms to the NYPD and the implementation of a monitor to oversee the NYPD’s policing tactics in future protests and to ensure compliance with the law.