“To come up here, throw a match on the ground and just relax is the opposite of everything we’ve ever known,” Martina Shelley said as she watched a group of people set small fires in a section of bushland on her family’s more than 1,600-hectare property.

The bushland management technique practiced by Aboriginal Australians for tens of thousands of years became less prevalent after European colonization when native peoples were largely dispossessed of their lands.

Aboriginal people used cultural burning, also known as fire-stick farming, to shape their environment. It thinned forests and created open areas that promoted the growth of wild vegetables and grasses that could be harvested, while allowing larger populations of animals to thrive and be hunted.

Following the devastating bushfires of 2019-2020, calls for the reintroduction of the practice have grown louder and landholders are increasingly taking it upon themselves to learn from first nations practitioners.

An estimated 12.6 million hectares of land were scorched in the fires of last summer, the largest loss seen in generations. In total, 33 people and almost 3 billion animals were killed.

While their farm was untouched, Shelley and her family spent the summer helping neighbors put out fires on their nearby properties. She says her local community of Bungendore, in regional New South Wales approximately 30 kilometers east of Australia’s capital Canberra, has been “traumatized” by the events.

“(For) people who’ve lived through fire, it’s like PTSD. It’s scary, and you feel fear when you think about fire,” Shelley, 49 said. “But now (having seen cultural burning), it’s the complete opposite.”

The workshop, run by Aboriginal man Den Barber, is the third of several cultural burns to take place on Shelley’s land. According to Barber, a former National Parks and Wildlife Service ranger, it is the first time in 50 years the area of bushland has been treated with fire, something he explains has left the land “messy” and “sick.”

“We don’t want wildfire, but we don’t want no fire either,” Barber, 56, tells the workshop participants, many of whom are also private landholders. “We want the right fire: cooler, and more often,” rather than that what he calls the “wrong fire.”

FEATURE: Aussie bees some of the healthiest in the world. But for how long?

Cool fire that moves slowly through the landscape is a key feature of cultural burns. Using a cigarette lighter, Barber demonstrates how a small spot fire lit under the right conditions in dry leaves, which cover the bushland floor, burns outwards, “like a little campfire,” before extinguishing itself.

By allowing multiple small fires to spread out 360 degrees from their source, creating a mosaic of burnt land, heat is not concentrated in one area. Flames also stay small and far from the tree canopy, which is particularly valuable for the food, shelter, and shade it provides to animals and humans alike.

“Would we burn our orchards? Our vineyards? Would we light that up? That’s how we have to look at (our) country,” Barber says of allowing fires to reach the productive forest canopy. 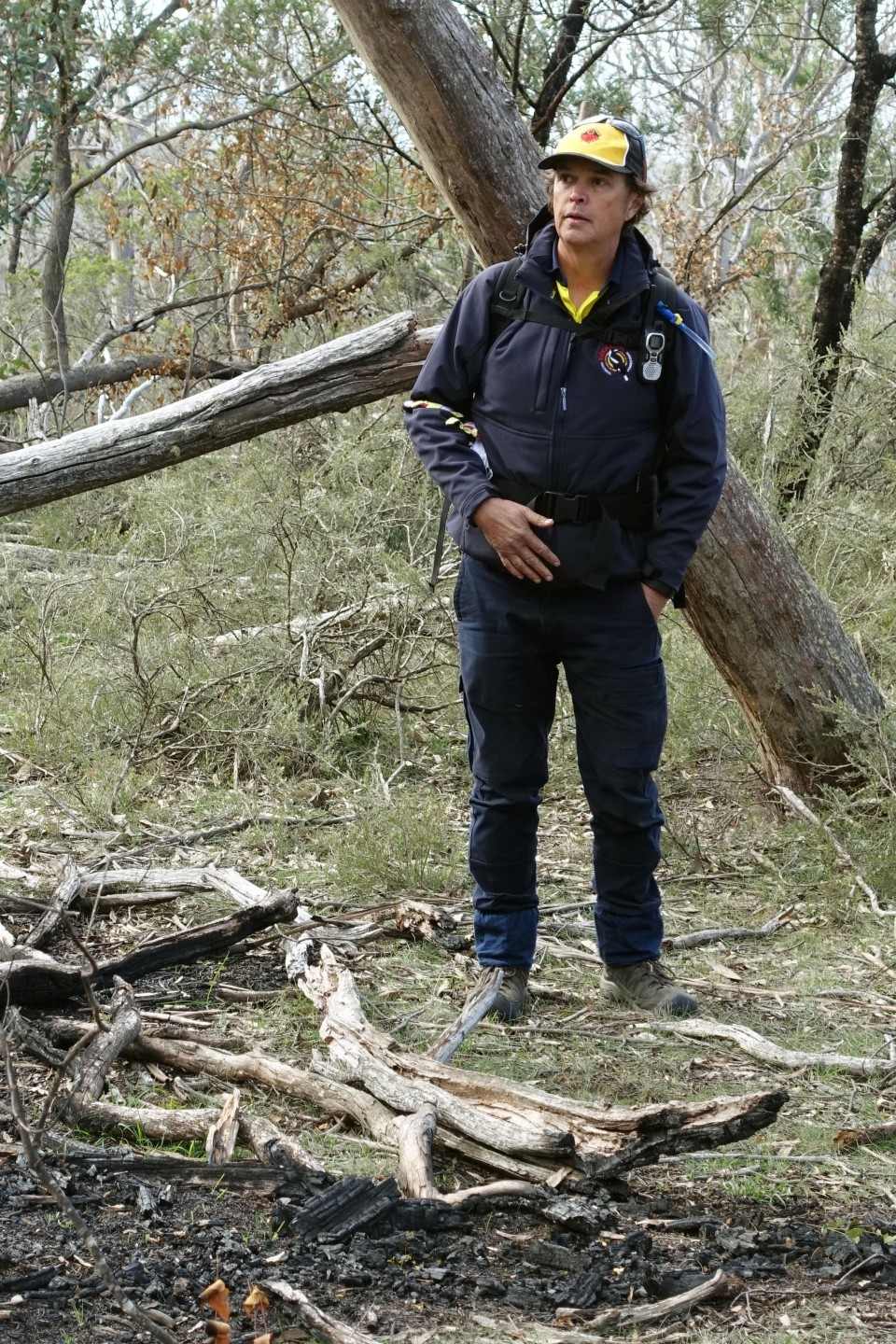 Den Barber, an indigenous man and former national park ranger, explains Aboriginal fire-stick farming during a workshop in Bungendore, Australia, on July 25, 2020. Some experts say the practice — burning undergrowth and dry leaves in small-scale controlled fires to clear the land — is an effective measure to control and reduce the increasingly intense summer bushfires in the country. (Kyodo)

Fighting fire with fire is not new in Australia. In calm periods of weather during the winter months, state-based fire authorities conduct hazard reduction burns to clear potential fuel, like leaf litter and fallen trees, from the dense bushland.

Barber explains a lack of fire in the landscape has allowed dead foliage to not only become a fire hazard, it’s a “super huge mulch layer” that prevents native grasses and shrubs from thriving in the undergrowth. Animals and insects rely on these smaller, softer plants for food and habitat, so without clearing and burning the bush regularly, the ecosystem is unbalanced.

Conversely, a fire that burns too hot and too fast accelerates the spread of aggressive, invasive plant species, disrupting the diversity of local flora and fauna.

“(Cultural burning) is such an integral part of the knowledge of country,” explains Shannon Foster, Aboriginal knowledge keeper and lecturer at the University of Technology Sydney.

Foster says she wants to see cultural burning adopted across Australia, and believes it could assist reconciliation between Aboriginal and non-Aboriginal Australians.

“Australian society, as a whole, needs to change how it’s thinking and feeling about Aboriginal people, and understand that we have a lot to offer and a lot to give,” the 47-year-old said.

“When you see things being implemented…and they’re helping people, and people are coming together, it can only mean a better future for everybody.”

But cultural burns are a time- and labor-intensive process, two things that the predominantly volunteer-run Rural Fire Service, the New South Wales community-based organization that responds to bushfires, do not have.

“We’re all volunteers, so we like to get in and get out. We don’t have days and days and days,” said William Verdon, 52, a member of a local RFS brigade who attended the workshop with a number of his colleagues.

“What the RFS does with hazard reduction burns isn’t about animals and things. It’s about saving property and infrastructure. The motivations are different.”

However, Verdon said that does not mean modern firefighting methods cannot or should not be adapted. “We should embrace it,” he said.”

Foster says the difference in motivations is one of the most difficult philosophical and cultural differences to reconcile when introducing cultural burning to non-Aboriginal people and organizations.

“It’s not about humans, it’s not about us…it’s about protecting country so that country has the capacity to protect us.”

While passionate proponents of cultural burning are calling for a complete return to pre-colonial land management practices, University of Tasmania Pyrogeography and Fire Science professor David Bowman fears that opportunity may have already passed.

“Climate change and land use (have) set us up for a relentless beating,” said Bowman who, while supportive of cultural burns, does not want them misinterpreted as an “elixir” to Australia’s bushfire problems.

“The bad news is, under high-intensity fires, as has been shown in this last summer, fuel treatments…just doesn’t matter. The flames and the sparks are jumping, they’re burning, reburning,” he told Kyodo News in a phone interview.

“The real benefit of fuel management (through cultural burning) is when it’s in close proximity to houses. It’s not going to stop the fire, but it will save the house,” Bowman, 62, said.

“It’s a fantastic technique right next to a suburb because it’s slow, it’s not about efficiency, it’s people-intensive, and it’s about caring about what happens.”

Looking toward the upcoming fire season, Shelley says she and her family feel better about what may come.

“We feel far more confident and calm about it,” she said. “We’ve learned you can use it like a tool. You can work with fire instead of against fire.”

This Black Man Graduated With His Ph.D. After Being Expelled From 10 Schools

COVID’s Impact in Real Time: Finding Balance Amid the Crisis