The Vermont lawmaker made the remarks to CNN’s Jake Tapper on Sunday during an appearance on State of the Union, in which he also confessed that he’d be willing to join the Biden-Harris administration.

While speaking about implementing President-elect Joe Biden’s progressive policies, Sanders recalled how their two teams met before the election to determine key issues.

“I fully expect that the Biden administration will be advocating those proposals that they agreed to … We’re going to fight to make sure that they’re implemented.”

Sen. @BernieSanders on the future of progressive policies in the next administration. pic.twitter.com/Cfjs68Emnj 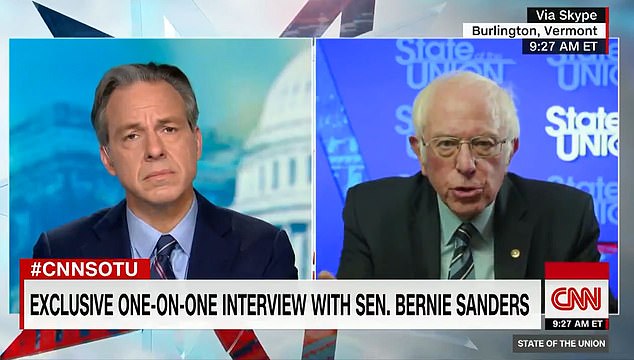 ‘I sometimes find it amusing when our opponents talk about the far left agenda,’ Sanders told CNN.

‘These are commonsense ideas that the majority of the American people support.’

Sanders added that ‘we’re going to fight to make sure that they are implemented.’

A September survey by Public Agenda, a nonpartisan research and public engagement organization, found that 72 per cent of surveyors supported raising the minimum wage. 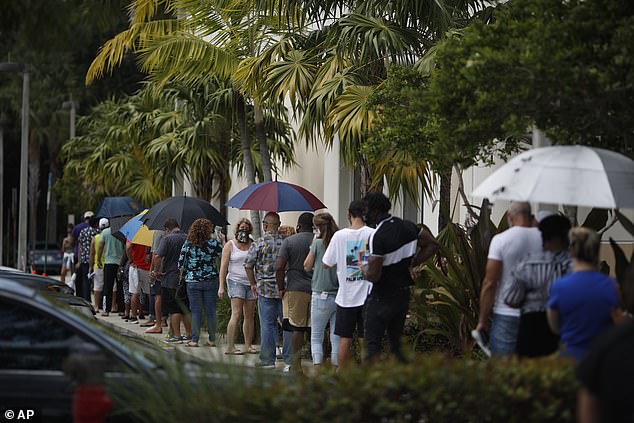 Residents in Florida wait to cast their ballots on Oct. 30. They voted to increase the minimum wage on election day to $15 an hour

An uptick in support appeared to coincide with the ongoing coronavirus pandemic, which has thrown numerous industries into the fray and unemployment reached staggering levels.

A March survey, distributed before lockdown restrictions began, reported raising the minimum wage received 66 per cent support overall. Surveyed Republicans tallied in at 48 per cent, Independents at 54 per cent and Democrats at 80 per cent.

A real life push for $15 minimum wage was seen in Florida, where residents voted to increase pay on Election Day.

Regarding healthcare expansions, a September Pew Research Center survey found that a majority of Americans want a single government program – not a mix of private and public coverage as is offered now. 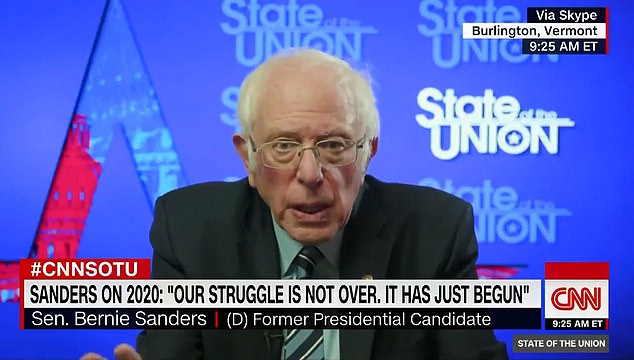 On State of the Union, Sanders said it the notion that such progressive policies were responsible for a number of 2020 election losses was ‘dead wrong.’

One reported point of contention was the divided support for defunnding the police among some progressive politicians, including Alexandria Ocasio-Cortez, but Sanders pushed back on its supposed popularity among colleagues.

‘Nobody I know who’s running for office talks about defunding the police,’ he said on State of the Union.

‘What we talk about is making police officers accountable, making sure that police departments do what they can do best, figuring out how you deal with mental illness, how you deal with homelessness, whether those are, in fact, police responsibilities, making sure the police officers are not killing innocent African-Americans. That is not defund the police.’

After admitting he would accept the Secretary of Labor position if offered by the Biden, Sanders reiterated his stance once again.

‘I talked to the Biden administration,’ Sanders said, confirming that he was in contact with the Biden transition team.

‘I want to do my best in whatever capacity as a senator or in the administration to protect the working families of this country.’

Bernie Sanders made eerily accurate prediction of Trump’s premature ‘victory’ declaration a WEEK before the election, saying president would accuse Democrats of fraud

Bernie Sanders accurately predicted that Donald Trump would prematurely claim victory in the presidential election before ballots had been fully counted in crucial swing states.

The Vermont senator made the prophecy during an interview with Jimmy Fallon on October 23, saying that the delayed counting of mail-in votes – which skew heavily Democrat – would make it look as if Republicans were further in front than they actually were.

Sanders told Fallon: ‘It could well be that at 10 o’clock on election night, Trump is winning in Michigan, he’s winning in Pennsylvania, he’s winning in Wisconsin, and he gets on the television and he says, “Thank you, Americans, for reelecting me. It’s all over. Have a good day.” 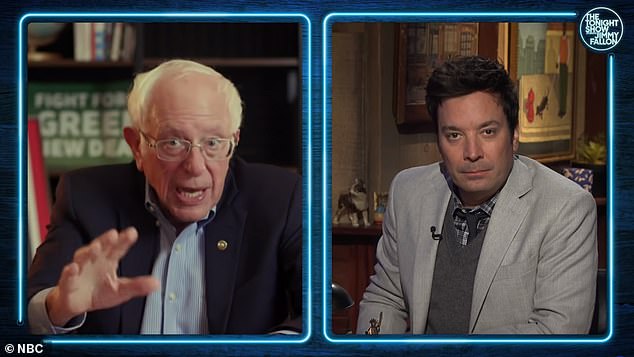 In an interview with Jimmy Fallon on October 23, Bernie Sanders accurately predicted that Donald Trump would prematurely claim victory in the presidential election before ballots had been fully counted in crucial swing states

As Sanders predicted, Trump did address the public on election night, when the count showed that he was indeed up several points in those three Midwestern swing states.

But as of lunchtime Wednesday, Democratic candidate Joe Biden had inched ahead in Michigan and Wisconsin as more mail-in ballots were counted.

During his address to the nation, Trump also claimed that Democrats were engaged in a fraudulent effort to steal the Presidency while he was out in front.

He stated: ‘This is a major fraud in our nation. We want the law to be used in a proper manner. So we’ll be going to the US Supreme Court. We want all voting to stop. We don’t want them to find any ballots at four o’clock in the morning and add them to the list.’

Sanders told Fallon that he was ‘worried’ Trump’s premature declaration of victory would legitimize claims of electoral fraud in the minds of voters, making it more likely that the President would not concede defeat. 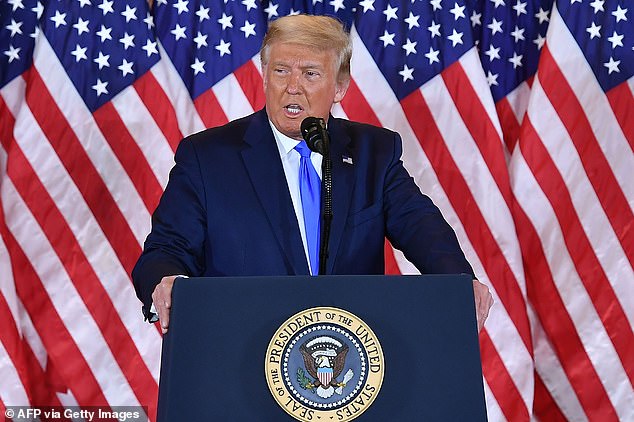 During his address to the nation early Wednesday morning, Trump also claimed that the Democrats were engaged in a fraudulent effort to steal the Presidency while he was out in front

Video of Sanders’ prediction has been watched on Twitter more than 21 million times since Tuesday night.

Hundreds of viewers left comments shocked by just how accurate the Senator’s assertions actually were.

‘He literally predicted the future,’ one marveled.

Meanwhile, on Wednesday morning, Trump took to Twitter to again claim he was the victim of electoral fraud as Joe Biden caught up with him in the count.

‘Last night I was leading, often solidly, in many key States, in almost all instances Democrat run & controlled. Then, one by one, they started to magically disappear as surprise ballot dumps were counted. VERY STRANGE, and the ‘pollsters’ got it completely & historically wrong,’ he raged.

He continued: ‘They are finding Biden votes all over the place – in Pennsylvania, Wisconsin, and Michigan. So bad for our country!’

The race remains too close to call, with votes in Michigan, Wisconsin, Pennsylvania, Georgia, Nevada and North Carolina still being counted.

Rio Tinto will not protect Oak Flat. Look what it did in Australia

Rio Tinto will not protect Oak Flat. Look what it did in Australia