The criticism from some Bills fans came immediately on social media after it was announced that McFarland and play-by-play man Joe Tessitore would call the Bills-Texans playoff game at 4:35 p.m. Saturday on ESPN and ABC affiliate WKBW-TV.

“Glad I’ll be in the stadium,” tweeted one of my Twitter followers.

“Turn the sound off,” wrote a Facebook follower. “Problem solved.”

“I hope the radio is synced up with Spectrum’s TV feed,” wrote another Facebook follower.

What would McFarland say to his Buffalo critics?

“Nothing at all, man. Just enjoy the broadcast. It is going to be a really good game; we got two really, really good teams,” said McFarland in an engaging, wide-ranging telephone interview that included discussions of the criticism he has received, his views on the Bills and Texans and his place in MNF history.

McFarland has been a lightning rod for criticism this season, including some from former and current NFL players. After McFarland criticized the mechanics of San Francisco quarterback Jimmy Garoppolo, former 49er tight end Brent Jones blasted the analyst.

“I know he is working hard, and he’s trying, but he’s a defensive lineman that doesn’t know anything about the game, and it’s a travesty that’s Monday Night Football,” said Jones.

McFarland has brought some of the criticism on himself.

He took some hits for praising first-year Cincinnati coach Zac Taylor in a blowout loss to the Los Angeles Ram in the fourth game of the Bengals’ 2-14. He thought the 2018 Minneapolis Miracle playoff victory over the New Orleans Saints cost the Vikings a victory.

McFarland takes all the criticism in stride.

“Criticism doesn’t affect me,” said McFarland. “I got into this business doing local radio in Tampa. Anytime you do local radio, you’re paid to give an opinion and half the people are going to like it, the other half will not. So I got accustomed to criticism early on. … Criticism has not and will never bother me.” 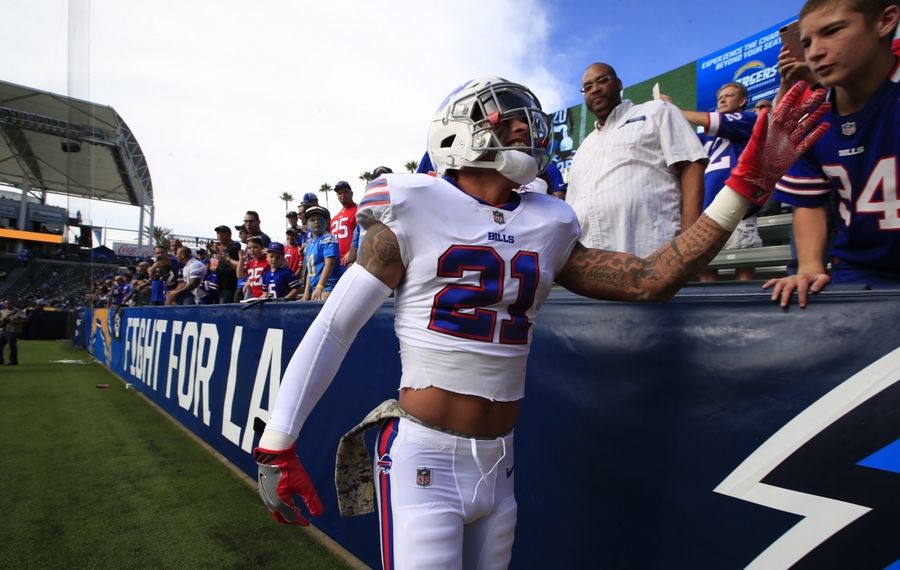 He heard about Jones’ criticism.

“It comes with the job,” said McFarland. “There are people who criticized Jesus, man. I’ll just leave it at that.”

Criticism isn’t the only thing he has had to deal with. Rumors also have been swirling that ESPN is looking to hire Tony Romo away from CBS and may take another run at Peyton Manning to replace McFarland on MNF next season. How does he deal with those rumors?

“No different than when I was a player and there were rumors (his teams) were going to draft a defensive tackle,” said McFarland. “I don’t worry about it. I go out, do my job. I’ve heard rumors since I was a first round pick out of LSU every year.”

He last saw the Bills play in person during a 25-6 loss to the New England Patriots on MNF in 2018 when Derek Anderson was at quarterback. The Bills weren’t on ESPN’s schedule this season, but McFarland was on the team’s bandwagon early when he called the Bills a surprise team after their 2-0 start.

“I thought they were and here we are, they’re in the postseason,” said McFarland, who added he’s watched them “a good bit.”

“As someone who’s a fan of the NFL and covers the NFL, I kind of take a peek at all the teams, especially the ones that are making a lot of noise and the Bills definitely have done that,” said McFarland.

His knowledge of the Bills and praise of the changes they’ve made this season might win over some WNY critics.

“I am very familiar with this organization even though we have not had them on,” he added. “I’ve got a ton of respect for who they are, what they are and I think they are going to be a tough, tough out.”

“I just love everything about them. The future is bright for them. I just think when you look at the general manager, head coach, young quarterback continuing to grow, a team built around the quarterback, I mean, what’s not to like about this team, man?”

He noted the upgrades on the offensive line, at running back, tight end and at receiver; said Allen “has gotten a little better”; and added that the defense “is not going to give up many big plays and plays a lot of zone coverage.

“When they want to match up they can, especially with one of their top corners, Tre’ Davious White. Jordan Phillips is having a really good year, even though it is a contract year. People are wondering if that is the reason. But nevertheless, he is still having a good year. This team overall has gotten better and better because it is built the right way.”

McFarland expanded on the Allen remark after being told some Bills fans might take umbrage at the words “a little better.”

“I judge him based off some of these other young quarterbacks,” McFarland said. “I think that the sky is the limit for Josh Allen. I think that when you look at the total package, he’s got the athletic ability, the size; he’s as tough as a bag of nails. He’s going to always be unconventional. He’s never going to be a 75% completion percentage guy from the pocket, but he’s also one of the better playmakers in the league. I just think he’s gotten better, and it is only Year Two, man. He’s got a long way to go but he he’s definitely coming.”

As far as the Texans, he said they missed defensive Jadeveon Clowney, who was traded to Seattle, and were hurt by the injury to defensive end J.J. Watt that caused him to miss eight games.

A former No. 1 draft choice at defensive end who won two Super Bowls in an eight-year NFL career, McFarland said he doesn’t know how effective Watt will be coming back in two months after suffering a pectoral injury that normally takes four months to recover from.

“That’s something I don’t know if anybody really knows,” said McFarland. “I got to think, for a guy who has been injured before, he knows his body. He knows when he is ready to play. … I don’t know what percentage he’ll be. … I’ll tell you this, nobody’s going to take it easy on him, so I hope he is as close to 100% as he can be.”

McFarland sees another key for Houston is the effectiveness of receiver Will Fuller, who is recovering from an injury.

“Offensively, Deshaun Watson is as good as advertised,” said McFarland. “They are a better offense when Will Fuller is there to complement DeAndre Hopkins, and (running back) Carlos Hyde has been really (good). The offensive line is better with (Laremy) Tunsil (who was acquired in a trade with Miami). I just think overall they have been really a much better team this year than they were last year.”

The same hasn’t been said of the MNF booth since the heavily criticized Jason Witten left to play another season for the Dallas Cowboy. McFarland noted the primary adjustment to going from a three-man team to a two-man booth is there no longer is the need to fill every second of air time.

“There’s more room to move around and have a conversation, and I also think there’s a lot more room to lay out as far as having dead air,” said McFarland. “You have three people, everybody’s kind of got to talk so you don’t really have a lot of dead air where you can just get natural crowd sound and all that stuff.”

Last season, he was on a revolving cart trying to get his two cents in as Witten joined Tessitore in the booth.

“I applaud them for being innovative, and we tried it and it didn’t work, and we kind of moved on from it. That’s kind of how I look at it,” said McFarland.

Now that he’s in the booth, he has made some history. He is the first African-American analyst in the booth on a No. 1 NFL team for a full season since O.J. Simpson left MNF in 1985.

“Is it everything? No. But does mean something? Absolutely. Just because I think you take pride you are doing something … that really doesn’t get done a lot.

“I give ESPN and my bosses a lot of credit because they put me in this position. It’s not the norm to see an African-American defensive tackle from the south in such a prominent role. I realize it, I respect it. … It’s not the focal point, but if you’re going to tell the story, it is part of the story.

“When I say it’s not normal … the facts are if you look around the broadcasting business, the No. 1 teams of CBS, Fox and NBC, the norm is offensive white guy, quarterbacks and receivers. The norm is not black defensive tackle. There’s your proof it is not normal. It doesn’t mean that we can’t do it. I think I’m proving that you can.”

Bills fans undoubtedly will weigh in on McFarland’s self-assessment on Saturday afternoon and evening.