Black Women Tech Leaders Share How They Defied the Odds and How You Can, Too 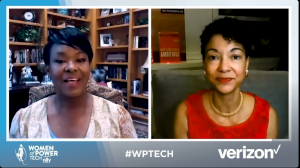 Day two of BLACK ENTERPRISE’s inaugural Women of Power Tech virtual summit was just as invigorating as the first!

A number of dynamic leaders shared insights and perspectives about how they scaled their way to the top of the tech industry in a variety of sessions, panels, and workshops. Hosted by Ally, the digital conference also included professional coaching to help Black women identify new trends and opportunities and gain the tools and skills necessary to advance in tech-driven industries.

During a session titled, “C-Suite Confidential: Top Tech Execs Who Defied the Odds and How You Can, Too” hosted by Verizon, Silicon Valley leader Shellye Archambeau and Chief Corporate Responsibility Officer Rose Stuckey Kirk talked about the sacrifices they made in order to succeed and why it was worth it. Archambeau, who sits on the board of directors of Verizon and Nordstrom, also shared nuggets from her new book, Unapologetically Ambitious: Take Risks, Break Barriers, and Create Success on Your Own Terms.

Here are a couple of gems from the session.

Find your path to power

After graduating from the prestigious Wharton School of the University of Pennsylvania, Archambeau revealed that she took a job in sales at IBM while many of her peers landed roles in investment banking. However, she explained that she took the opportunity because she realized that it would ultimately lead her to her ultimate goal to become run a corporate business.

“I took a first job in sales coming out of Wharton. Nobody does that,” she said.

“My friends were going off to be investment bankers, right, P&G product managers, and international finance people and I was going in to sell computers. But I had done that because I was joining IBM—which, at the time, was like the Apple or Google of its day—I did my research. Every single CEO at IBM started out in sales. So, I said that must be the path to power, so I’ll start out in sales.”

The tech veteran added that all of her career decisions were also calculated based on her long-term goals.

Archambeau, the Board Director and former CEO of Metricstream, also stressed the importance of being intentional about your career journey.

“It’s really important as you’re building your career to realize that you own your career. You do, not anybody else. Not your boss, not your manager, not your employees, not your spouse, not your mentors. You own it,” she said. “It’s important to take charge of what you own.”

Watch the “C-Suite Confidential: Top Tech Execs Who Defied the Odds and How You Can, Too” session at the Women of Power Tech Summit below.

This Priestess Is Teaching Others The Truth About Vodou And Hoodoo