Corporate brands speaking out in support of the Black Lives Matter movement were few and far between when it was founded in 2013 –  but things have changed.

As protests swept through the United States in response to the death of George Floyd during his arrest by four police officers in Minneapolis, brands around the world pledged their support to the international human rights Black Lives Matter movement.

As this movement gained momentum, it also reminded us of the acts of police brutality, high incarceration rates and racial violence towards Indigenous Australians.

Appearing on well-known brands’ social feeds, posts have ranged from general condemnations of racism to direct mentions of Black Lives Matter and calls for action.

Brands are now held accountable by consumers to ensure they are practising what they preach in their hiring, collaborations, and ad campaigns. If they do not meet these expectations, they risk being labelled as ‘slacktivists’ for offering support and inauthentic activism without demonstrating tangible outcomes.

Australian brands such as Cotton On, The Iconic and Quay have publicly supported the movement with posts that have attracted thousands of likes and positive comments.

While some corporate messages have been welcomed, others have consumers questioning why brands are not taking meaningful action.

Australian fashion label Zimmerman expressed solidarity with the movement but was consequently accused of racial discrimination by two former interns. This was followed by a leaked internal document that outlined very euro-centric presentation policies for retail staff, banning top knots and braids for hair.

In response, Zimmerman pledged to donate to NAACP Legal Defense and Educational Fund and the Aboriginal Legal Service in Australia as well as founded a Diversity and Inclusion leadership group in their company.

L’Oreal Paris was also slammed for pledging support to Black Lives Matter after firing model Munroe Bergdorf in 2017 for speaking about racism online. In response L’Oreal Paris appointed Munro Bergdorf onto their new diversity board.

YouTube announced a $US1 million donation to the Center for Policing Equity, to demonstrate “solidarity against racism and violence”, yet received backlash at the trivial size of the investment to its annual revenue ($US15.1 billion in 2019), with criticism that the platform’s algorithm encourages racial bias and extremism. 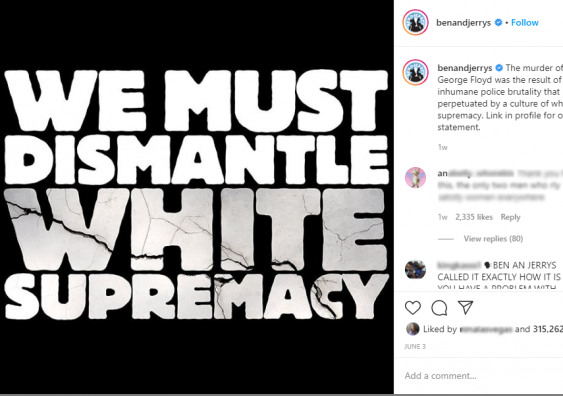 Is there anything good about slacktivism?

A/Prof. Garg says when a movement or cause is in the beginning stages even a little bit of awareness, where you give people the easy first step to promote a platform for the issue, is positive. Then people who are not aware of the issue are informed and this can cause positive attitudinal changes.

“At an individual level, it might be okay. Because it gives them something they can control immediately with low cost.

“But the negatives are obvious if you stop there,” says A/Prof Garg.

“If you are a corporation or an influencer with millions of followers, this is not going to be enough. People can do these small steps and think, ‘Oh, I’ve done my part. I’m excused from doing anything more.’ ”

What approach do brands need to take?

A/Prof Garg says corporate brands need to establish their position and then deliver it in a meaningful way.

Rather than just participating in #blackouttuesday, brands should be furthering the steps to solidify their commitment to social causes.

A/Prof. Garg says when major corporations come forward and merely say they support issues that have been present for decades, it reflects negatively on the company because they have had ample time to have already figured out a better response.

Corporate brands need to have a strategy in place, and they need to get clarity in their own vision to come up with an action plan.

But there are some brands that have managed to support the Black Lives Matter movement in meaningful ways.

Aussie brand Aesop announced it would donate $US100,000 to organisations that “fight racial injustice and promote opportunities” whilst also sharing information on their social media about the injustices.

The company posted on Twitter: “The murder of George Floyd was the result of inhumane police brutality that is perpetuated by a culture of white supremacy.”

A/Prof. Garg believes a step in the right direction for brands would be talking about the issue on their social media platforms, while instituting policies that reflect practices in the company, establishing scholarships for minorities, and donating to the cause.

Confederate, Columbus Statues Are Being Torn Down Across The Country