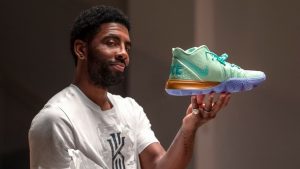 With all the controversies that have followed Brooklyn Nets point guard Kyrie Irving for years, there is one thing that no one can ever question and that’s his heart! According to SB Nation, former NBA player, Stephen Jackson, while being interviewed on Etan Thomas’ podcast “The Rematch”, revealed that Irving had purchased a house for George Floyd’s family.

Floyd was a victim of police brutality whose life was cut short (The incident was caught on mobile phone footage that went viral) by Minneapolis police officer Derek Chauvin, who was seen kneeling on Floyd’s neck for almost eight minutes until he died. The viral video restarted the racial injustice and police brutality protests that are still gripping the United States and happening worldwide now.

While Jackson was being interviewed, Thomas asked about Floyd’s daughter, Gianna, and how she was doing. In conversation, Jackson mentions the purchase of the home by Brooklyn Nets’ Irving.

“She’s getting so much love — not just from us, but from people all around the world who are showing support,” Jackson said. “I’m just continuing to do what I said I was going to do; I said I was going to be my brother’s keeper and take care of his daughter and make sure that her next days are her best days. I have a lot of my friends. Kyrie Irving bought them a house. Lil Wayne’s manager bought them a Mercedes Benz. Barbra Streisand gave them stock in Disney.

“I think God has definitely blessed her. I think she’s doing the best she’s ever done; she’s happy. We’re just waiting for this trial to get out of the way, so she doesn’t have to keep reliving the situation and she can go about living her life.”