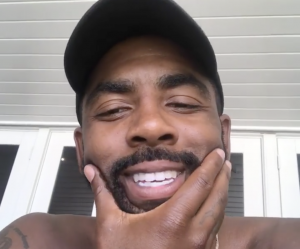 The NBA has fined Brooklyn Nets guard Kyrie Irving $50,000 for violating its COVID-19 protocol. He will also lose over $800,000 in pay for games missed due to having to quarantine. The organization released a statement regarding the events leading up to the penalty.

“Irving will forfeit salary for any games he misses due to his five-day quarantine period, which will allow him to return to team activities on Sat., Jan. 16 if he continues to test negative,” Spruell continued.

The NBA has fined the Nets’ Kyrie Irving $50,000 for violating the league’s health and safety protocols and assigned him a five-day quarantine

He will forfeit more than $400,000 in salary per game for those missed during quarantine at a rate of 1/81.6 of his season salary pic.twitter.com/oaj4u0dWHm

The 28-year-old basketball star is forced to sit out for five days because of a video posted to social media which showed Irving turning up at his sister’s birthday party with family and friends– sans a mask and social distancing.

The league takes the protocol seriously and has sanctioned players who fail to comply with warnings, fines or suspensions. Players who repeatedly disregard the rules could be subject to more severe punishment.

Irving isn’t the only NBA player to have risked it all as much of the country still quarantines due to the deadly pandemic.

The recently-traded Harden tested positive for the virus last summer.

The two players have been the only members of the league confirmed as not following NBA regulations.