‘Your climate crisis destroyed my home’: Couple take the charred remains of their house burned to the ground in a bushfire to Canberra and blame Scott Morrison

A couple whose home burnt down in recent bushfires have taken the remains to Parliament House for a protest calling on the federal Government to do more for climate change.

Greenpeace assembled a group of survivors to travel to Canberra for the protest on Monday as it blames climate change for devastating bushfires that have destroyed more than 600 houses since fire season began on October 1.

The claim is contested by others who say bushfires are a regular part of the Australian landscape and the intensity of recent fires was due to a lack of hazard-reduction burning.

Melinda Plesman and Dean Kennedy took the incinerated remains of their home from Nymboida, near Grafton in northern NSW, to Parliament House in Canberra where they directed their protest to Prime Minister Scott Morrison on Monday.

The couple stood in front of a piece of smoke-blackened corrugated iron from their home of 35 years on which were painted the words: ‘Morrison your climate crisis destroyed my home’.

‘This was our family home. We’ve had many wonderful Christmases here, and this is the first year we won’t have that,’ Ms Plesman said in a Greenpeace media release. 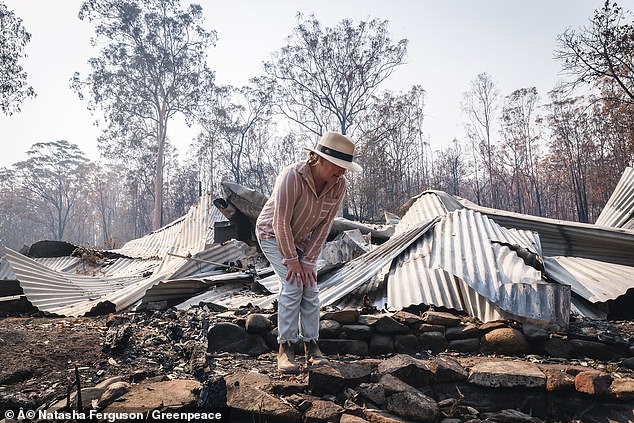 A devastated Melinda Plesman at the burnt remains of her home in Nymboida, 44 kilometres southwest of Grafton in northern NSW after bushfires destroyed it 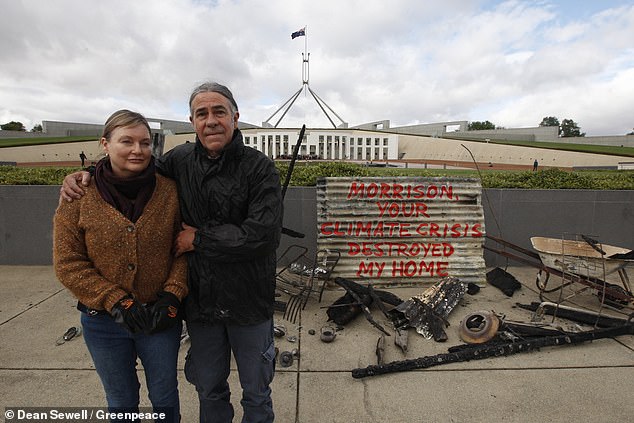 Melinda Plesman and Dean Kennedy took the charred remains of their home to Parliament House, Canberra, on Monday for a Greenpeace protest on climate change

Ms Plesman’s family lost three homes on their family property alongside nearly 100 burnt down in Nymboida, Greenpeace said in a Facebook post.

‘We need to move towards 100 per cent renewable energy,’ she said.

A combination of highly flammable eucalyptus bush, rugged terrain, periodic droughts and hot temperatures make Australia’s east coast bushland one of the most fire-prone habitats in the world. 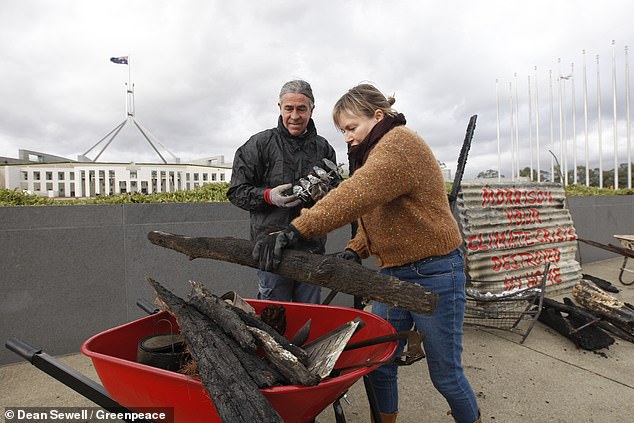 Ms Plesman and Mr Kennedy unloading the remains of their home. The pair blame climate change for the devastating fire, but others say a lack of hazard reduction burning was at fault 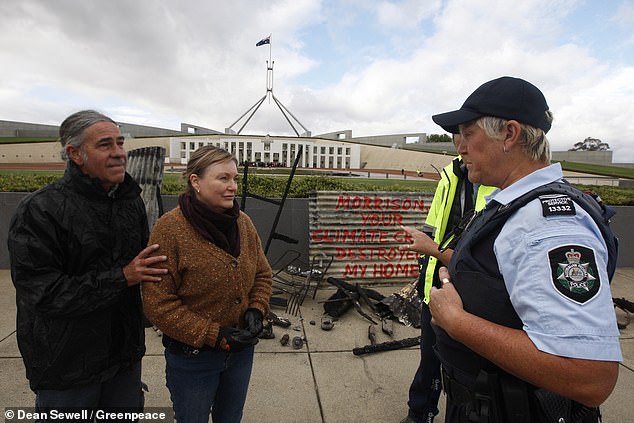 For thousands of years before European colonisation, Aboriginal people used fire farming to hunt, to burn off undergrowth and to keep trails clear, the National Museum of Australia says on its website.

Over millenia, these controlled burns favoured the survival of fire-resistant plant species and kept the fuel load of dead plant material low, reducing each fire’s intensity.

Prime Minister Scott Morrison has disputed that changing climate conditions have anything to do with the severity of the recent bushfires.

Others have blamed a lack of hazard-reduction burning in the lead-up to bushfire season, including  NSW Deputy Premier John Barilaro.

‘We need to do more hazard ­reduction, (burning) in national parks to manage the fuel load,’ he told The Australian newspaper last month.

‘The growing fire crisis means it’s vital western science and Aboriginal knowledge are brought together to make communities as fire-safe as possible,’ he wrote in The Conversation.