Byron Allen Has No Plans To Slow Down In the Future 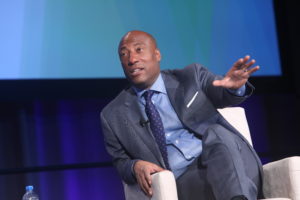 Media Mogul Byron Allen sat down for a virtual chat with Black Enterprise President and CEO Earl “Butch” Graves Jr. for the opening remarks of day two of the 2020 Black Enterprise Entrepreneurs Summit. The two men discussed Allen’s childhood, his career, how he became a media giant, and his plans for the future.

Allen owns Entertainment Studio’s Networks, a collection of ten 24-hour networks, including The Weather Channel. He also owns the Black news platform The Grio while his Allen Media Group owns big four stations in California, Oregon, Indiana and Minnesota and other states.

Allen, who was born just over two weeks after his mother’s 17th birthday in Detroit, Michigan, said he got his work ethic from watching his dad work for The Ford Motor company and his grandfather work for Great Lakes Steel for over 30 years.

“I just had a very good childhood,” Allen said. “It was a great blue collar, Midwest childhood. These guys I don’t think ever called in a day sick and they were always trying to figure out how to put 36 hours into a 24 hour day so I saw that great American blue collar work ethic, which always stuck with me.”

The former standup comedian also gave a lot of credit to his mother, Carolyn Folks, who moved her and Allen to California when he was a child. Eventually they found their own place and Folks began attending UCLA Film School.

“She’s a beautiful person, she’s brilliant,” said Allen. “She attended UCLA Film School and because she attended the school to get her master’s degree I would go out there with her and to NBC.”

Allen went on to say his mother tried to get a job at NBC. When they declined, Folks asked if she could be an intern, which the network said yes to despite not having an internship program.

“What changed everything for us is when she asked them will you start one with me, ‘can I work for you for free?’ and they said yes and because she got a job at NBC and as a child I was able to go with her and I was exposed to a lot.”

Folks’ job allowed Allen to experience shows like the Johnny Carson and Redd Foxx show recordings as a young pre-teen and became hooked with the entertainment industry.

Allen worked his way up from a standup comedian to becoming a featured actor on NBC. However, it wasn’t long before Allen realized the industry didn’t value him the way he did. According to Allen, a contract dispute he had while on the hit show Real People led from being an actor to an owner.

“I was asking to be paid in year three, what my white counterparts were making in year one and they didn’t want to do that,” Allen said.

Allen added the dispute was eventually worked out which allowed him to continue his role on the show in seasons four and five, but the issue was enough for Allen to start considering his next move.

“Having someone tell me and my mom what I was worth, was a very painful experience, as a matter of fact I was fired for that period of time,” said Allen. “I realized in that moment it wasn’t show business, but business show. and I made it a point to learn the business.”

The U.S.C. graduate also said in the chat with Graves that the work ethic he displayed in his younger days is still needed to become a success today.

“Anyone can have an Idea, ideas are a dime a dozen,” Allen said. “But it’s not just the idea, its execution and distribution and monetization of that idea and that’s what you have to master now.”

Allen added he made it a point to learn the business by going to conventions for people who owned and operated TV stations to learn more and to make connections that help him to this day. Allen founded  Entertainment Studios in 1993 and launched his first series Entertainers with Byron Allen — a weekly, one-hour show profiling the stars of film, television and sports. Most of the Interviews were already recorded, which gave Allen time to focus on the show’s advertising was about to sell more than $1 million in advertising due to the show’s popularity and the seed money to get where he is today.

Graves also asked Allen’s about his lawsuit against Comcast Cable, his Supreme Court fight, and if he really wants to purchase CNN one day. Allen responded saying it’s time Black people in media get their due and that he’s not waiting for a seat at the table.

“This is no longer an ask,” Allen said. “This is a take. I’m not asking for a seat at the table, I’m taking one and before you blink, I’m going to own the table, the house, the estate and everything you can see.”