Byron Allen, Wayne Brady, and Other Business Leaders Talk Pivoting in the Pandemic and Success Strategies at The Black Enterprise Entrepreneurs Summit 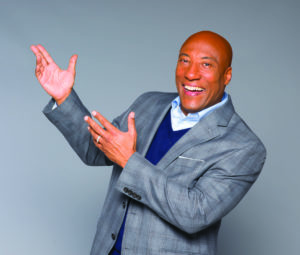 The two-day virtual conference, which was hosted in partnership with Nationwide, was designed to accelerate the growth, profitability, and scalability of Black-owned businesses. This year marks the first virtual conference in its 25-year history and included several new elements, including live chats with speakers and experts, virtual coaching, mentorship, and networking opportunities.

During a fireside chat, Brady revealed how he has capitalized from the COVID-19 pandemic, which has brought the world to a standstill. Rather than waiting to pitch his sketch and series ideas to a network, he began taking advantage of social media as a tool to produce his own content. After being pushed by his 17-year-old daughter, he created his first TikTok video which garnered over 1 million viewers. He then went on to make more videos through his production company, which has helped him secure a network deal with CBS as well as a few advertising deals.

“The pandemic sucks, don’t get me wrong, but it brought out that entrepreneurial spirit in me,” said Brady. “And in six months, I’ve had so many blessings because of that.”

The host of Let’s Make A Deal added that he has also learned how to leverage social media into mainstream success from internet personalities like King Bach. “You’re never too old to learn a new trick or learn a new hustle.”

During another keynote chat, Allen talked about his transition from a standup comedian to an actor on NBC and eventually a business owner. According to Allen, a contract dispute he had while on the hit show Real People motivated him to become a media owner.

“I was asking to be paid in year three what my white counterparts were making in year one and they didn’t want to do that,” Allen said.

He also opened up about the importance of supporting and funding Black-owned media.

“I told the advertising community, ‘you’re racist. You’re extremely racist.’ I go to your ad agencies and you have nothing but white kids there who know don’t know anything about Black History Month or Black Music Month,” said Allen. “I said ‘you guys are spending a $150 billion a year [but] you don’t spend any with Black-owned media and that’s why Black-owned media doesn’t exist, barely exists and is nearly extinct.’”

On Thursday, powerhouse entrepreneurs Nick Cannon and John Hope Bryant were among the business leaders who kicked off the summit, sharing insight and strategies for business owners to navigate the market at this time of uncertainty. During a fireside chat, Cannon, an acclaimed entertainer and the founder of NCREDIBLE Entertainment, opened up about his roots in entrepreneurship and television.

.@NickCannon on his business role models including Harry Belafonte and Quincy Jones and his admiration for how they’ve shifted the culture.

Register for the #BEsummit at https://t.co/DMFsqGofb6 to watch the full fireside chat with Nick Cannon sponsored by @Nationwide pic.twitter.com/EFBl0Ow6OX

“I was a natural-born entrepreneur. I call it an entreper-trainer now,” said Cannon, who executive produces and hosts Fox’s The Masked Singer as well as MTV/VH1’s Wild N’ Out, which was temporarily canceled by parent company ViacomCBS, earlier this year over his anti-Semitic remarks. Before getting originally picked up by MTV, Cannon used his own funding to shoot and produce Wild N’ Out. “It’s called investing in your vision,” he said. “That goes back to passion. That goes back to—even when others can’t see the seed that you possess, you have to plant it into the ground yourself.”

Cannon also talked about his business role models, naming Harry Belafonte and Quincy Jones, and his admiration for how they’ve shifted the culture.⁣

During a fireside chat, Hope Bryant, the founder of Operation HOPE, talked about his partnership with Shopify to develop 1 million Black businesses.

Here is how it works and how you can get involved! Head to https://t.co/OpJ3sajgHP to apply today! #BEsummit pic.twitter.com/aNIRXw0AUz

During the “Capitalizing on Cultural Currency and Social Influence” session, Alex Wolf, an award-winning tech, culture, and business influencer, and Travis Weekes, the founder and managing partner of Driven Society, talked about the secret to monetizing social media and leveraging cultural clout to build your brand and your business.

Tech and Culture Influencer, @alexwolfco, and Brand Manager at Driven Society, Travis Weekes, on the future of influencer marketing.

Register for the #BEsummit at https://t.co/DMFsqGofb6 to watch the full Capitalizing on Cultural Currency and Social Influence panel. pic.twitter.com/yzbxIxIR4M