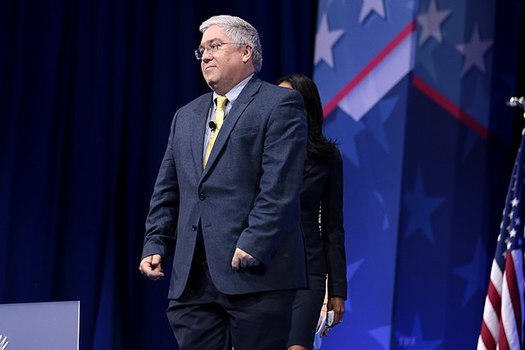 The West Virginia NAACP is leading a charge to remove and disbar Attorney General Patrick Morrisey for joining the state in a lawsuit that attempted to disenfranchise voters. (Gage Skidmore/Wikimedia Commons)

CHARLESTON, W.Va. — With House Democrats moving forward on impeaching President Donald Trump, a coalition of West Virginia lawmakers and civil-rights groups are calling on state legislators to also oust and disbar its attorney general for participating in what they’re calling “un-American” efforts to disenfranchise voters in the presidential election.

“Morrisey has betrayed his oath, our state and our nation over and over again by adding West Virginia to an unethical and un-American lawsuit aimed at disenfranchising minority voters,” Frankenberry said. “Patrick Morrisey is unfit to hold the highest law-enforcement office in West Virginia.”

Morrisey has said the lawsuit was needed to consider “unconstitutional actions that have occurred in the states during the 2020 elections.” The Supreme Court rejected the lawsuit.

With Republicans making up the majority of the Legislature, the push for impeachment probably won’t get very far when the Legislature begins on Wednesday. But Democratic state Delegate Barbara Fleischauer said the legal ethics of Morrisey’s actions could lead to disbarment.

“This legal maneuver of sticking their nose into the business of other states is very, very questionable,” Fleischauer said.

“The counting of votes is one of the most precious rights that we have in our country,” she said. “This lawsuit was an attempt to devalue the votes of people, many of whom were African Americans. And we had to fight a civil war for them to get their right to vote.”

The West Virginia NAACP and Democratic delegates are leading the call for Morrisey’s removal and disbarment.

Friends of HOW bring holiday cheer to homeless

Friends of HOW bring holiday cheer to homeless