Australian Treasurer Josh Frydenberg on Tuesday night handed down a budget designed to steer a course back from the unprecedented twin crises of the bushfire crisis and the coronavirus pandemic, with a major emphasis on job creation, manufacturing and big business.

In a year dominated by environmental crisis and the deaths of hundreds of Australians from COVID-19, predominantly in federally-regulated aged care facilities, climate change and substantive investment in aged care were notable omissions from the Government’s recovery plan, which was seen as lacking in big-picture thinking, ambition or imagination.

Frydenberg described 2020 as a year when “Australians have been tested like never before”, with the pandemic resulting in the “most severe global economic crisis since the Great Depression”.

More than one million Australians had lost their jobs or had their hours reduced to zero in little more than one month, Frydenberg said, describing a “monumental task ahead”:

So many Australians, through no fault of their own, are doing it tough.

Lives have been lost.

Our cherished way of life has been put on hold.

Our local heroes, the healthcare workers on the frontline, just as our volunteer firefighters did over summer, are showing us the way.

Their courage, commitment, and compassion reflects the very best of Australia.

Tonight, a grateful nation gives thanks.

These qualities are the invisible strength of Australia.

A resilient people, a proud nation and we will get through this together.

The Great Depression and two World Wars did not bring Australia to its knees, neither will COVID-19.”

As widely foreshadowed, manufacturing and a massive $17.8 billion in tax cuts form the backbone of the Government’s plans to kickstart Australia’s virus-shocked economy, with the single largest commitment, some $26.7 billion, to fund wholesale asset writeoffs in a bid to get business to spend.

Instead of seizing the opportunity to set Australia on a bold trajectory of modernisation with climate change as its impetus, the Government had opted for what independent MP Zali Steggall described as “business as usual”.

“The government is spinning this budget as a ‘big spend’ when it is really a drop in revenue and no major investment,” said Steggall.

“The main beneficiaries will be large construction companies capable of tendering on large infrastructure projects.”

“This should have been a budget of hope, with full employment and a green recovery. Instead, this budget actively chooses to prolong the recession, fuel the climate crisis and leave young people behind,” he said.

“There are no limits on what is possible right now, if we just have the vision and the courage to stand up to those vested interests who are lining their pockets.”

No climate for change

The apparent fever dream of last summer and its pall of smog forgotten, the Government’s environment plans focus on a $233 million upgrade of Commonwealth National Parks at Kakadu, Uluru, Christmas Island and Booderee.

It’s also pledged $250 million to modernise Australia’s recycling infrastructure, formalising a “ban” on exporting waste that has de facto been the situation for some time due to recipient countries closing to our business.

Frydenberg foreshadowed “further investments to strengthen our resilience to natural disasters” to be announced in the Government’s response to the bushfires Royal Commission.

Frydenberg said the mental health funding was a recognition that many Australians were doing it very tough as a result of the pandemic.

“My heart goes out to all those Australians – young and old – for whom COVID-19 has caused such pain. My message tonight is that this House stands with you. You are not alone,” he said. 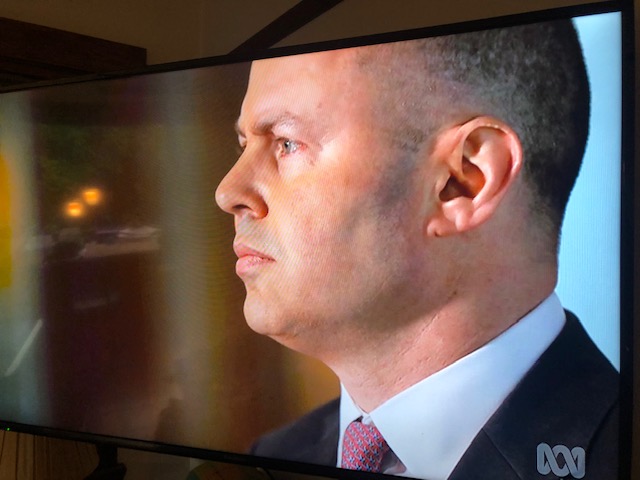 Though the Federal Government has been heavily criticised for its failings in aged care during the COVID-19 outbreak, with the quantum of Australia’s deaths concentrated in the sector, it pledged just $1.6 billion to fund 23,000 new places over four years.

“We’ll be holding Scott Morrison to his promise to fix the aged care system. This particular budget does not appear to have done this,” Henschke said.

In a rare glimmer of sense among the high-vis, the Government pledged an additional $3.9 billion to the National Disability Insurance Scheme.

There was precious little on offer for Aboriginal and Torres Strait Islander people in a budget heavy on rhetoric and the winged prayer that people will spend their tax cuts and corporate offsets but offering little in the way of substance.

Minister for Indigenous Australians Ken Wyatt unveiled $46.5 million for capacity-building in Aboriginal Community Controlled Health Organisations over the next four years, among other measures including:

Not mentioned by Wyatt, but contained in the budget papers was a quiet commitment to make the Government’s controversial cashless debit card trial sites permanent. 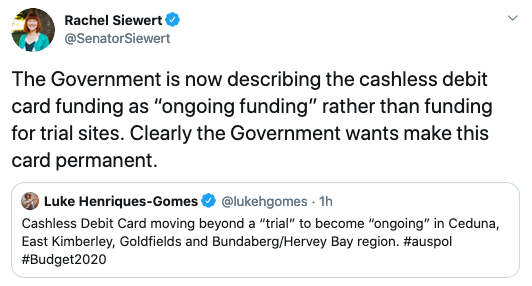 The budget disappointed many groups, with no commitment to social housing and a $41.3 million cut to homelessness spending from July 2021.

“In a year with huge increases in unemployment creating a surge in rental stress and homelessness, the Federal Government has chosen to slash homelessness funding,” said Jenny Smith from Homelessness Australia of the “senseless and cruel” move.

Perhaps most telling were those queuing up to commend the budget, including the Business Council of Australia and the oil and gas industry.

Closing the Gap targets get $46m in budget | Guardian News

The Afro-Latino Santiago-Hudson brings the mother of the blues, Ma Rainey, back to life for Netflix

The Afro-Latino Santiago-Hudson brings the mother of the blues, Ma Rainey, back to life for Netflix

The Countdown: AOC on Twitch, Lesley Stahl and Obama's inspiration