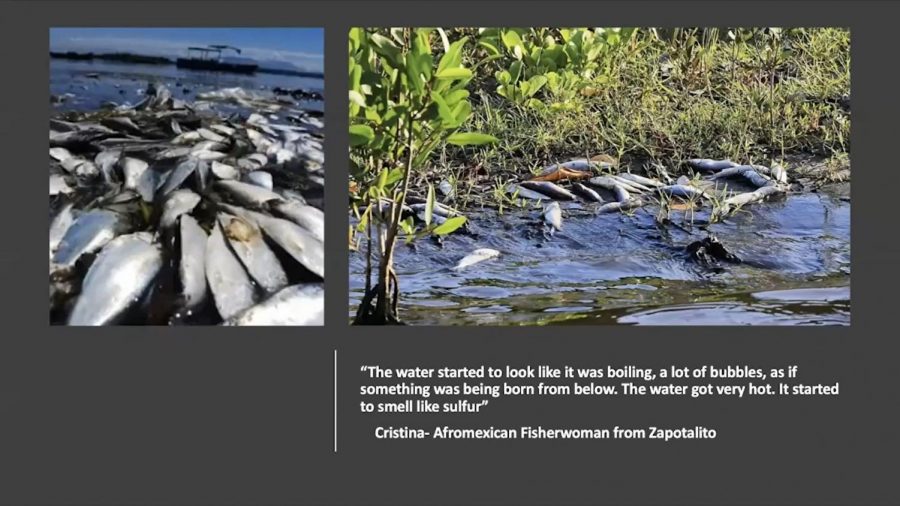 Image of presentation of the dead fish in Oaxaca. The fish died due to the large amounts of toxins that entered the water after an earthquake in 2017.

The CSUN University Library and the Tom & Ethel Bradley Center hosted the “Afro-Tradition, Environmental Racism, and Black Place-Making in Mexico” virtual event on Feb. 5 with support from CSUN’s Diversity and Equity Innovative Grant.

Award-winning filmmaker and video producer Ebony Bailey, historian Jayson Porter and anthropologist Meztli Yoalli Rodriguez were the speakers in the virtual panel where they discussed the social and environmental injustices that Afro-Mexicans currently face.

During the Spanish conquest, many African slaves were brought to Mexico and found safety along Costa Chica, a small coast between the state of Oaxaca and Guerreo. After the slaves escaped to Costa Chica, the small coast became the largest known Black community in Mexico with a grand total population size of 1.38 million self-identified Afro-Mexicans.

Although Mexico is a diverse nation with different racial groups, its Black community is facing exclusivity, environmental racism and the effects of placemaking in Mexico’s modern society.

In connection to Mexico’s diversity issue, the CSUN community wanted to acknowledge the gap in equality between traditional Latin communities and Afro-Latinx people.

In a proposal to receive funding for this event, José Luis Benavides, the director of the Tom & Ethel Bradley Center, wrote: “A project of this nature could help address the needs of a group of students who can’t easily find others with similar backgrounds.”

His plan is to bridge the communities between Latinos and those of African descent within the CSUN community.

Bailey screened her documentary “Jamaica y Tamarindo,” which translates to “Hibiscus and Tamarind,” two ingredients that are popular in Mexico’s dishes but native to the tropical regions of Africa.

“Jamaica y Tamarindo” dives into the social issues that Afro-Mexicans deal with in Mexico. In the documentary, all subjects were of African descent and they share the same sense of exclusion.

For some Afro-Mexicans, exclusivity derived from within their own communities. Terms like “negrita,” or “morenita,” which translates to “darkie” in English, are common “naturally violent terms of endearment” as described in the short film. Others, as portrayed in the film, were treated as foreigners or ignored completely.

Aside from dealing with racial terms, the Afro-Mexican communities are also left to deal with environmental inequities within their communities.

In 2017, Rodriguez lived in Oaxaca, one of the populated African communities in Mexico. . Aside from not having the resources to rebuild their towns after the 7.1 earthquake that destroyed large parts of Mexico in 2017, the communities also did not have a stable food source as the fish in their fishing lagoons died due to large amounts of toxins that entered the water.

“It didn’t appear in any newspaper. No one knew about it. This is a part of environmental racism,” Rodriguez said.

Charmaine Jefferson, a board member at the Tom and Ethel Bradley Center, said she was moved by the event and provided her support for bridging the gap between the Latinx and Afro-Latinx communities.

In her early days as a former executive director of the California African American Museum in Los Angeles, Jefferson brought in the exhibition “The African Presence in Mexico” for CAAM’s Black History Month showcase.

To Jefferson’s amazement, a Black teacher chaperoning a school field trip was upset at the exhibit and refused to enter because she believed it represented a different country, culture and somebody else’s history.

Jefferson recalled enlightening the teacher and explaining that the founder of Black History Month , Carter G. Woodson, not only fought for a month of recognition, but also traveled the world hoping to make the month a worldly discussion.

“I reminded her that Mexico had a stamp of Martin Luther King, Jr., before the United States,” Jefferson said.

For now, the panel will continue to bring awareness to Mexico’s underrepresented groups by traveling to different universities.

For more information on Costa Chica read, “Dying Lagoons Reveal Mexico’s Environmental Racism” by Porter and Rodriguez, or follow them on Twitter at @rodriguezchieftah and @meztliyoalli .