Vice President Dr Mahamudu Bawumia Friday urged the Police Service to remain neutral in its operations and deal decisively with anybody that will foment trouble before, during and after this year’s parliamentary and presidential elections this year.

He said the upcoming general elections would be a litmus test for the country’s democracy and entreated the Police to discharge their duties professionally devoid of intimidation and harassment of the public.

He reaffirmed Government’s commitment to provide the Police Service with the requisite logistics and tools to perform their constitutional mandate, in order to safeguard the peace and security of the nation and ensure a credible and transparent electoral process.

Vice President Bawumia made the call at the 2019 West African Security Services Activity (WASSA) of the Ghana Police Service held at the Police Headquarters in Accra.

The annual get-together afforded an opportunity for personnel of the Police Service to take stock of the previous year’s activities and interact with the civilian population towards ensuring improved service in the coming year.

At this year’s event, police personnel were entertained with contemporary music from popular Ghanaian artistes, with a lot of food and drinks to savour the day.

Vice President Bawumia, also the Chairman of the Police Council, while recounting some of the support offered to the Service, said Government since 2017 provided 700 multi-purpose vehicles and three helicopters to the Service to enhance its operational effectiveness and safeguard the peace and security of the citizenry.

Additionally, police personnel were given body armours, cameras and other modern gadgets to safeguard their safety.

Currently, six constables are undergoing aviation training in South Africa to pilot the helicopters, while 50 personnel were being trained to constitute the Police Airborne Unit to enable the Police to respond effectively to aerial situations and protect lives and property.

Vice President Bawumia said 320 housing units were under construction to offset the housing deficit and thus, entreated the Service to continue exercising professionalism and adopt modern intelligence and investigation strategies to safeguard peace and tranquillity.

According to him, 20,000 security officers across the various security agencies due for promotion were promoted since 2017, which motivated and boosted their morale to give off their best.

He said greater collaboration between the Police and their civilian counterparts would help in curbing crimes and making the nation a better place to live.

Dr Bawumia lauded the Management of the Police Service for introducing an Anti-Corruption Action Plan and Complaint Unit to deal with police misconduct and public complaints timeously.

He charged them to work tirelessly to halt the frequent road carnage by strictly enforcing road safety regulations and prosecute offenders to serve as a deterrent to others.

“Fatal road accidents often leave psychological scars and painful experiences on the families of the victims and therefore being the key institution for ensuring internal security and safety, you should work to prevent road carnage in the country,” Dr Bawumia advised.

Vice President Bawumia said government was leveraging on digitisation to fight crime, saying that, the Driver and Vehicle Licensing Authority (DVLA) and the National Insurance Commission (NIC) had linked their database so that the Motor Traffic and Transport Department (MTTD) of the Police Service could easily check whether vehicles were insured and possessed the requisite roadworthy documents. 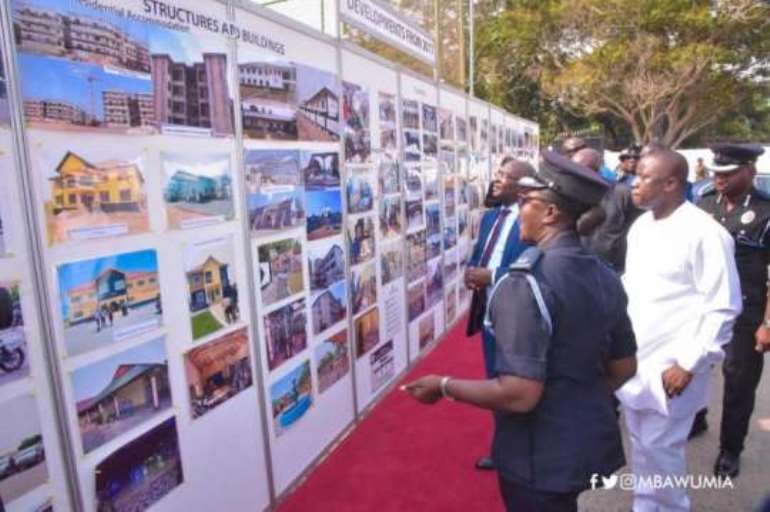 That, he believed, would go a long way to curb road crashes and rid-off rickety vehicles on the road to ensure road safety for both motorists and passengers.

Currently, he said, the Service had a staff strength of 34,982 with a ratio of 1:808 police to civilian thus, falling below the United Nations standard of 1:500.

He said the Service lost 11 police personnel in line of duty last year and a minute of silence was observed to honour their memory.

COP Agblor said 7,000 police personnel who were due for promotion in 2019 were duly promoted across various ranks, thereby boosting their morale to give off their best and ensuring the safety of Ghanaians.

On accommodation challenge, he said, those who paid their own rent were duly reimbursed and thus, commended government for taking measures to solve the police accommodation deficit.

He pledged the Service’s resolve to remain impartial in its operations as the nation heads for general election to safeguard peace and security.

The Service rewarded 10 police personnel and two civilian staff for their exceptional contributions over the past year.

Vice President Bawumia earlier inspected a photo exhibition mounted by the Police Service showcasing some of the government’s developmental projects implemented over the past three years.

What if Museveni intentionally let the opposition win the so-called by-elections that made Bobi someone to be talked about?

Amanda Edwards Says She'll Be the Third Black Woman to Ever Hold a U.S. Senate Seat

Amanda Edwards Says She'll Be the Third Black Woman to Ever Hold a U.S. Senate Seat