Early humans living two million years ago already had the skills and tools they needed in order to cope with the effects of climate change, study shows.

Archaeologists from the Max Planck Institute studied changes to the environment and habitats of early hominins at the Oldupai Gorge heritage site in Tanzania.

Also known as the ‘Cradle of Humankind’, new field work at the site revealed our ancestors remained stable despite environment changes over 200,000 years.

These early humans stayed in a habitat continuously throughout – despite having to cope with global warming, wildfires, droughts and volcanic eruptions.

It shows migrations ‘out of Africa’ were possible even during the early human periods – as our ancestors possessed the ability to expand into new ecosystems. 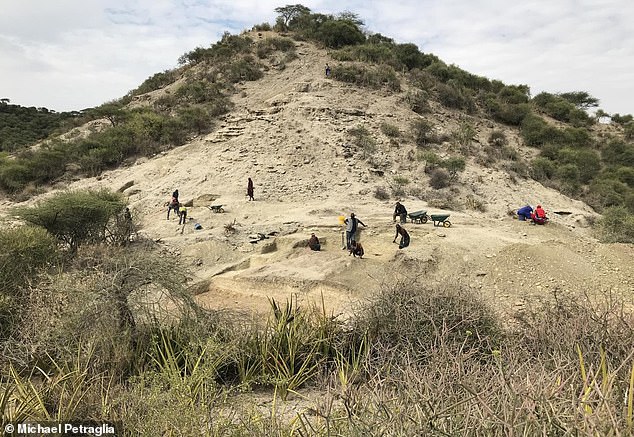 Olduvai (now Oldupai) Gorge, known as the Cradle of Humankind, is a UNESCO World Heritage site in Tanzania. Early human used a wide diversity of habitats amidst environmental changes across a 200,000 year-long period

Co-author Professor Michael Petraglia, of the Max Planck Institute for the Science of Human History, in Germany, said it is evidence of a behavioural flexibility.

OLDUPAI GORGE WAS THE CRADLE OF HUMANKIND

It is located in the Great Rift Valley, between the Ngorongoro Crater and the Serengeti National Park.

It was formed about 30,000 years ago, the result of aggressive geological activity and streams.

The steep ravine is about 30 miles long and 300 feet deep.

They span several million years and for more than a century experts have been exploring the region to understand where we came from.

He said this started in the context of the dawn of the evolution of the hominins – and helped ‘set the stage for the eventual global, invasive spread of Homo sapiens.’

Excavations at Tanzania’s Oldupai Gorge, previously known as the Olduvai Gorge,  uncovered the presence of hominins – our most primitive ancestors – that lived between two and one point eight million years ago.

The oldest form of stone tools, known as Oldowan, were also unearthed, along with a wide variety of mammal fossils including wild cattle, pigs, hippos, panthers, lions, hyena, primates, reptiles and birds – all had been butchered for food.

The crude Oldowan implements were used to smash open the bones and extract the nutritious marrow from the butchered animals, experts discovered.

Remains of one of the first hominins were found just 350 metres away from this site in deposits dating back 1.82 million years.

Known as Homo habilis, the four foot tall species had a short body, long arms like an ape’s – and a big brain. Its name translates as ‘handy man’ after his tool skills.

Despite having to cope with persistent weather catastrophes, the area remained occupied by early humans – proving they could adapt to climate change.

It turned from lakeside palm groves, idyllic meadows littered with ferns and mosaics of woodland to landscapes burned by natural disasters and dry steppes.

The evidence shows periodic but recurrent land use across a subset of environments – punctuated with times when there is an absence of activity. 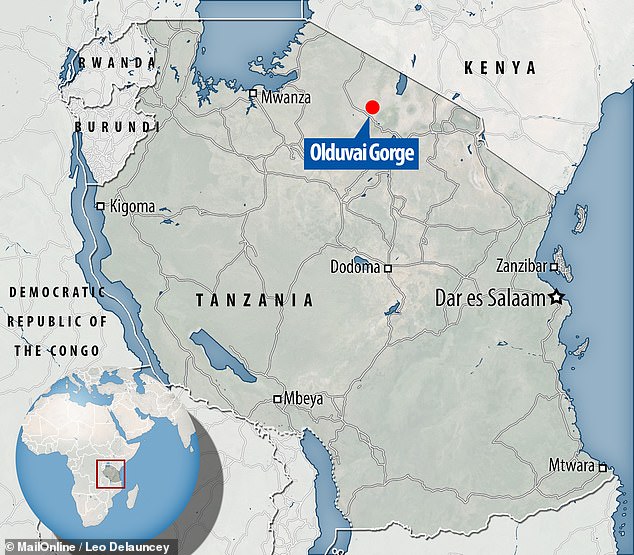 The Oldubai Gorge, previously known as Oldavai Gorge, in northern Tanzania has produced some of the oldest remains of early human ancestors known to date

Co-author Dr Pastory Bushozi, of Dar es Salaam University, Tanzania, said: ‘The occupation of varied and unstable environments – including after volcanic activity – is one of the earliest examples of adaptation to major ecological transformations.’

The Unesco World Heritage Oldupai Gorge site is located in the Great Rift Valley, between the Ngorongoro Crater and the Serengeti National Park.

It was formed about 30,000 years ago, the result of aggressive geological activity and streams. The steep ravine is about 30 miles long and 300 feet deep.

The location boasts extraordinary records of extinct human species spanning several million years and for more than a century experts have been exploring outcrops.

The latest study published in Nature Communications sheds light on the environmental contexts in which these hominins lived for the first time. 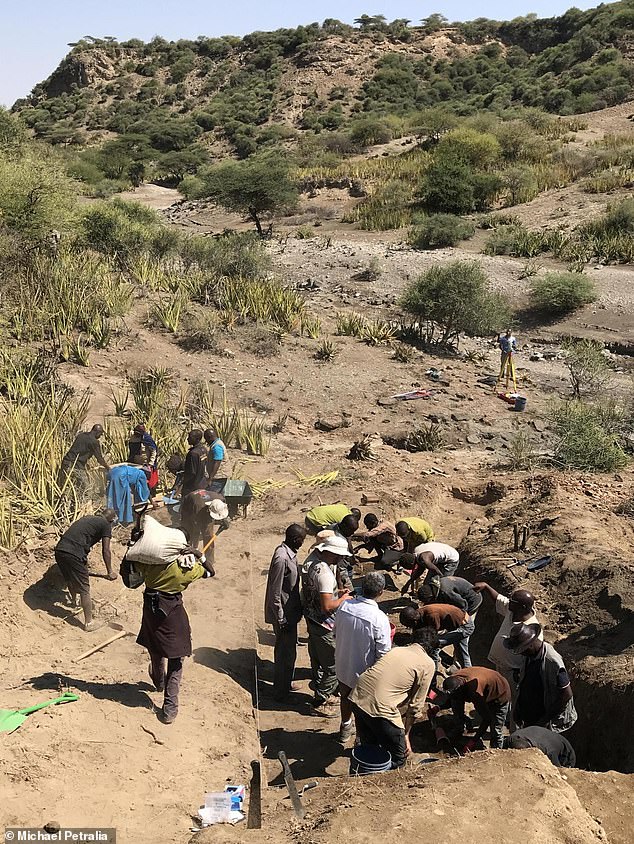 Excavation at Ewass Oldupa uncovered the oldest Oldowan stone tools ever found at Oldupai Gorge, dating to ~2 million years ago and fossils of mammals, reptiles and birds

Hominin occupation of fluctuating and disturbed habitats is unique in the prehistoric records. It shows complex behavioural adaptations among these early humans.

In the face of new challenges they did not substantially alter their toolkits – but instead their technology remained stable over time.

Indicative of their versatility, typical Oldowan stone tools hewn from pebbles and cobbles and sharp-edged flakes continued to be used even as conditions changed.

It shows they had the capacity to continually exploit a multitude of habitats using reliable tools to process plants and cut up animals – over the long term.

Other hominins such as Australopithecines – the species to which the famous early human ancestor ‘Lucy’ belongs – may also have been making stone tools there.

The findings have been published in the journal Nature Communications.

DNA AND GENOME STUDIES USED TO CAPTURE OUR GENETIC PAST

Four major studies in recent times have changed the way we view our  ancestral history.

After analysing DNA from 142 populations around the world, the researchers conclude that all modern humans living today can trace their ancestry back to a single group that emerged in Africa 200,000 years ago.

They also found that all non-Africans appear to be descended from a single group that split from the ancestors of African hunter gatherers around 130,000 years ago.

The study also shows how humans appear to have formed isolated groups within Africa with populations on the continent separating from each other.

This examined 483 genomes from 148 populations around the world to examine the expansion of Homo sapiens out of Africa.

They found that indigenous populations in modern Papua New Guinea owe two percent of their genomes to a now extinct group of Homo sapiens.

This suggests there was a distinct wave of human migration out of Africa around 120,000 years ago.

Using genomes from 83 Aboriginal Australians and 25 Papuans from New Guinea, this study examined the genetic origins of these early Pacific populations.

These groups are thought to have descended from some of the first humans to have left Africa and has raised questions about whether their ancestors were from an earlier wave of migration than the rest of Eurasia.

The new study found that the ancestors of modern Aboriginal Australians and Papuans split from Europeans and Asians around 58,000 years ago following a single migration out of Africa.

These two populations themselves later diverged around 37,000 years ago, long before the physical separation of Australia and New Guinea some 10,000 years ago.

Researchers from the University of Hawaii at Mānoa used one of the first integrated climate-human migration computer models to re-create the spread of Homo sapiens over the past 125,000 years.

The model simulates ice-ages, abrupt climate change and captures the arrival times of Homo sapiens in the Eastern Mediterranean, Arabian Peninsula, Southern China, and Australia in close agreement with paleoclimate reconstructions and fossil and archaeological evidence.

The found that it appears modern humans first left Africa 100,000 years ago in a series of slow-paced migration waves.

They estimate that Homo sapiens first arrived in southern Europe around 80,000-90,000 years ago, far earlier than previously believed.

The results challenge traditional models that suggest there was a single exodus out of Africa around 60,000 years ago.

Educate your wards on COVID protocols—Sunyani MCE to parents

Educate your wards on COVID protocols—Sunyani MCE to parents