Free speech under threat: Australian whistleblowers, journalists and protesters are being prosecuted at an alarming rate, report finds

Free speech is under mounting pressure in Australia with the prosecution of protesters and whistleblowers a concern for Human Rights Watch.

The advocacy group’s latest annual report on global human rights says Australia’s national security laws are open to misuse and have been used to target journalists.

‘Australia’s national security laws shouldn’t be used to intimidate the media or those holding the government to account’ the group’s Australian director Elaine Pearson said.

‘The government seems intent on sending a message to officials not to share information with journalists.’ 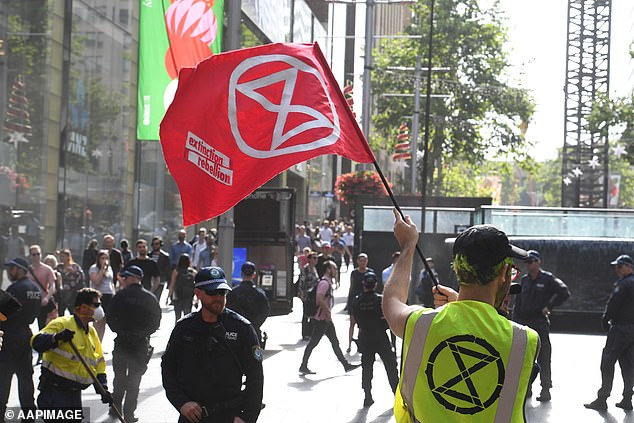 In October, arrested protesters were banned from returning to the Sydney CBD and associating with other members of the activist group Extinction Rebellion (a protest is pictured)

The report points to the government’s cases against multiple whistleblowers and journalists, including the former-Australian spy known only as Witness K and News Corp journalist Annika Smethurst.

In October, arrested protesters – including Mr Ludlam – were banned from returning to the Sydney CBD and associating with other members of the activist group Extinction Rebellion. The bail conditions were overturned after a legal challenge.

But the report also pointed to China’s efforts to curtail free speech on Australian soil, with the surveilling of pro-Hong Kong Chinese students on Australian university campuses.

‘Aboriginal and Torres Strait Islander people comprise 28 per cent of Australia’s adult prison population, but just three per cent of the national population,’ the report said.

The detention of asylum seekers in offshore detention facilities was highlighted, as well as the repeal of laws giving doctors a greater say in allowing asylum seekers to travel to mainland Australia for medical treatment.

Ms Pearson called the repeal of the medevac laws a ‘cruel political manoeuvre’.