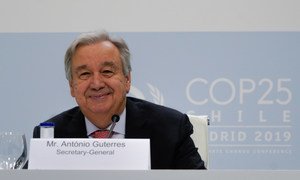 Resolve, sustainable solutions and zero carbon emissions by 2050, are essential to stop the world “sleepwalking past the point of no return”, UN Secretary-General António Guterres said on Monday in Madrid.

Speaking at the opening of the UN Climate Summit in Madrid, the UN chief warned that failing to act risked jeopardizing the health and safety of everyone on this planet.

“In several regions of the world, coal power plants continue to be planned and built in large numbers”, he said. “Either we stop this addiction to coal or all our efforts to tackle climate change will be doomed”.

Mr. Guterres pointed out that the fossil fuel industry is not alone.

“From agriculture to transportation, from urban planning and construction to cement, steel and other carbon-intensive industries, we are far from a sustainable path”, he maintained.

Slavery: Not a historical relic 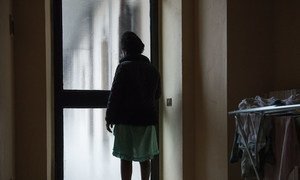 More than 40 million people worldwide are victims of modern slavery, the International Labour Organisation (ILO) said on Monday, International Day for the Abolition of Slavery.

Although modern slavery is not defined in law, it essentially refers to situations of exploitation where a person cannot exercise free will in terms of their labour, because of threats, violence, coercion, deception, or abuse of power.

Global estimates reveal that some 40.3 million people are in modern slavery including 24.9 in forced labour and 15.4 million in forced marriages.

And women and girls are disproportionately affected, accounting for 99 per cent of victims in the commercial sex industry.

Moreover, for every 1,000 people in the world, 5.4 are victims of modern slavery, one-in-four of them children. 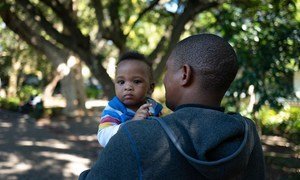 Sunday was World AIDS Day, and to mark that and raise awareness about child sexual abuse linked to HIV, one ironman has raised the bar, literally.

Cheered on by colleagues at UNAIDS, staff member Peter Koopmans did 15 “Murphs”, as the workout exercises are known, smashing the previous world record of 13 and raising around $25,000 at the same time.

That’ll help to care for abused youngsters in South Africa, where reported cases of child abuse have increased by 400 per cent in the past nine years.

Listen to what Mr. Koopman had to say in Daniel Johnson’s interview with him:

$48 billion and counting, the cost of Israeli occupation for Palestinians

According to UN economists, the cost of Israeli occupation for the Palestinian people from 2000 to 2017 is nearly $48 billion in lost revenue.

In a report to Member States in New York, the UN Trade and Development Agency (UNCTAD) warned that the Palestinian economy has been severely stunted, owing to its chronic fiscal and trade deficit and the fact that it’s highly dependent on the Israeli economy.

Of the $47.7 billion in lost earnings, more than $28 billion is interest charges accrued over the years.

Another $6.6 billion is in so-called “leaked” Palestinian revenues to Israel, UNCTAD maintained.

It cited restrictions on the free movement of the people and goods between Israel and the Occupied Palestinian Territories, control by Israel of all border crossing points and limits on Palestinians’ free use of land and resources, as reasons for the huge losses.

The study also highlighted economic models indicating that if the lost billions had been injected into the economy, they would have generated around two million jobs over the 18-year period. 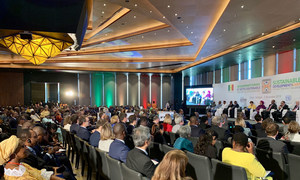 High debt and debt distress can “easily undermine” the development progress that the African countries have achieved, Deputy Secretary-General Amina Mohammed said on Monday at a conference on sustainability and debt in Dakar, Senegal.

“High debt creates uncertainty, deterring investment and innovation, and stalling economic growth and development”, the deputy UN chief said at the inaugural session of the discussion, co-organized by the International Monetary Fund (IMF) and Senegalese Government.

“As the scale of the challenge is becoming clearer, the international community needs to step up”, she maintained.

Pointing to the 1990s debt crisis, she stressed the need “to ensure that history does not repeat itself”.

“We need strong political will from African countries and the commitment of international partners to address the structural issues that constrain sustainable development financing in Africa”, she spelled out.

“We are encouraging countries to adopt integrated national financing frameworks….[to] help align all financing policies and approaches – from tax to investment, aid and debt – with national priorities”, concluded the deputy UN chief.

Listen to or download our audio News in Brief for 29 November on SoundCloud:

Common Partners With Burlington Stores to Give Coats to The Needy

Common Partners With Burlington Stores to Give Coats to The Needy