Gentefied creators were intent on casting a Los Angeles-born actress to play Yessika Flores—the 23-year-old Afro-Latina activist who is Ana Morales’ love interest on the show. Authentic representation was key. But, that all changed when Julissa Calderon stepped into the room to read for Yessika.

As co-creator Marvin Lemus told Remezcla back at Sundance, every casting choice and character description on the show was very intentional. Yessika, for example, was always created with an Afro-Latina actress in mind.

But, the decision to ensure Yessika was an L.A.-born, Mexican-American kept receding into the background the more they thought about Calderon (whom they passed on twice, actually). Born in New York and raised in Miami, Calderon may not have fit the bill for what they were looking for (she sounded “too New York,” per Calderon’s recollection), but she so crushed her audition that she had Lemus and co-creator Linda Yvette Chavez dreaming up ways of rewriting the character’s backstory to better suit the Pero Like breakout star. The actress’s Dominican heritage and accent became integral to who Yessika is on the show.

That attention to detail (after all, Lemus and Chavez could easily have cast Calderon and kept her character’s L.A. ties intact) is what made Calderon so enamored with the project. At the red carpet premiere of the Netflix show, she spoke candidly with Remezcla about how one of her pet peeves about Latinx representation on screen is when it’s clear that whoever is behind the camera is not attuned to the nuances within the community:

“Like, if you’re going to write for a Cuban person or you’re going to write for a Caribbean person, what applies to a Mexican doesn’t apply to a Caribeño. It’s just not how it works. And I think that’s the biggest problem. When you don’t have us in the room but you’re telling our story you’re not going to get it all the way correct, because nobody is fact-checking and saying, ‘Well, actually, we wouldn’t do that. That’s not ours. That’s Puerto Rico.’ Or ‘That’s not ours. That’s Colombian.’ They don’t get it. They think we’re all the same.”

Ironically, Calderon had experienced a different kind of reductive thinking when she first moved from Miami to Los Angeles and she came face to face with industrywide biases about how Latinidad is understood. As she shared in Netflix’s new Dascha Polanco-hosted podcast Brown Love, many of her auditions forced her to reckon with the kind colorism Lemus and Chavez were eager to delve into with the character of Yessika. 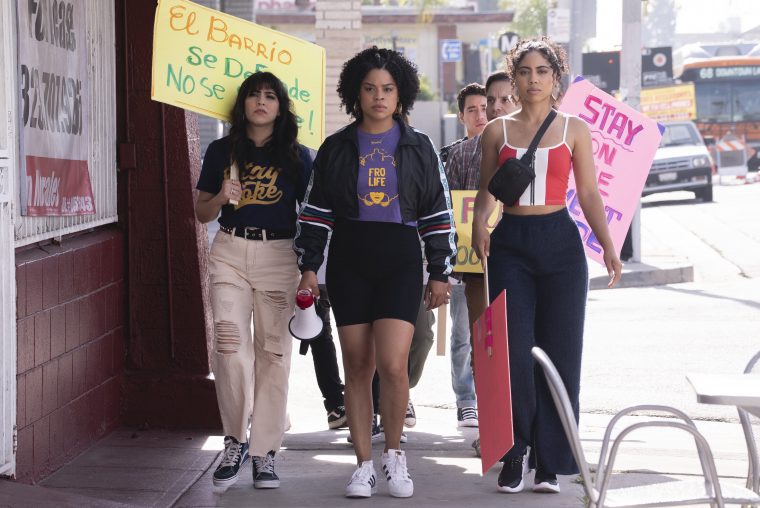 “When I did go in for Latina roles, nobody in the room looked like me,” she shares with Orange is the New Black‘s stars Polanco and Selenis Leyva on the inaugural Brown Love podcast episode. “But that was my thing. It was either I go in for these African American roles but my accent was a problem or I went in for these Latina roles and I’m the only real brown girl with some kink in my hair.”

Seeing Lemus and Chavez be so open to embracing what she could bring to Yessika marked, for Calderon, a kind of breakthrough—especially for the way they tailored her character to better complement her casting. To watch Yessika be an out and proud queer Dominican who brings her girlfriend tacos in a heart-shaped box, dons “Fro Life” T-shirts and stands up to Ana calling out the way her family reduces her to an “angry black girl” is a reminder that including Afro-Latinx characters in shows like Gentefied can be a radical way of shining a light on intersectional issues that would otherwise be brushed aside if not outright ignored.

Here’s to hoping season two (fingers crossed!) gives the show’s writers a chance to delve deeper into Yessika and explore her storyline outside of her romantic relationship with Ana and her antagonistic relationship with Ana’s family. One thing’s for sure, though: Julissa Calderon is breaking barriers and changing the game, one scene-stealing role at a time.

Gentefied is now streaming on Netflix.

Additional reporting was conducted by Vanessa Erazo for Remezcla.