President Akufo-Addo says Ghanaians want a leader who will put the nation onto the path of progress and prosperity, and not one who will lead the country back to the dark days of ‘dumsor’, economic mismanagement, and the economy into a recession.

Speaking at Krobo Odumase on Monday, 23rd November 2020, as part of his 2-day tour of the Eastern Region, President Akufo-Addo stated that the Ghanaian people are tired of ‘negative propaganda’ in the politics of Ghana, and do not want leaders whose track record in office was abysmal.

“Is that what we need? Is that the leadership of the country that we need?” the President asked, to which massive crowd at Odumase retorted “No.”

According to the President, Ghanaians “are looking for different leadership. We are looking for leadership that is going to bring progress and prosperity to Ghana, and not backwardness and false claims.”

To the gathering at the venue for the interaction, President recounted several of the policies implemented by his Government over the last four (4) years, which include Free SHS, Planting for Food and Jobs, 1-District-1-Factory, 1-Village-1-Dam, amongst others. 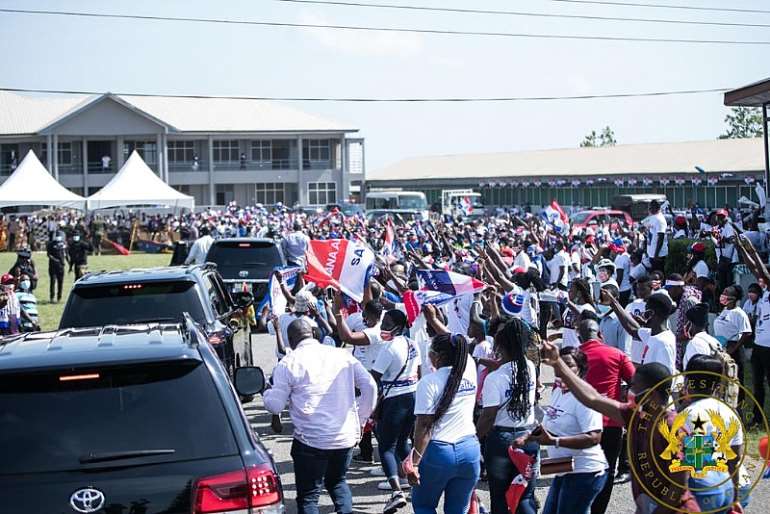 “If the work is satisfactory if you find the work has been satisfactory, what I am asking you, Manya Krobo, to do is to give me the opportunity to do my work, and give me four more years for Nana,” he added.

His period in office, President Akufo-Addo reiterated, has also dismantled the propaganda of the National Democratic Congress that the NPP has a negative agenda against Krobos.

The President continued, “Has any krobo person been harassed in Akyem Abuakwa or here my period? It is all negative propaganda from people who cannot do things, and have to invent things to be able to compromise our minds. We are tired of negative propaganda in the politics of Ghana”.