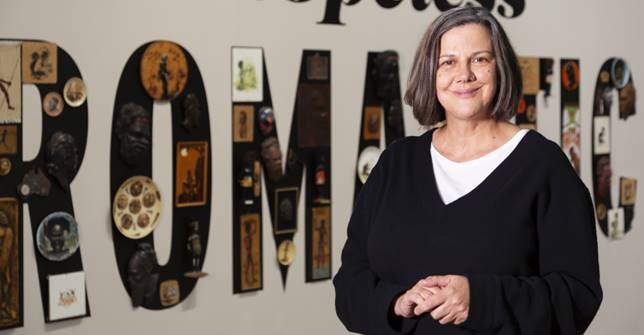 Just three years from its last iteration, the National Gallery of Australia has announced a new National Indigenous Art Triennial – its 4th – though it won’t actually occur until the end of next year. As the others occurred in 2007, 2012 and 2017, I reckon that really makes them Quinquennnials! The highly experienced Hetti Perkins, an Arrernte and Kalkadoon woman from Sydney, has been appointed its curator.

The Director of the NGA, Nick Mitzevich said he was delighted Ms Perkins was joining the Gallery to help lead its mission to tell an inclusive story of Australia through the presentation of art from multiple points of view. (What does that mean???) “The National Gallery is the custodian of the largest collection of Aboriginal and Torres Strait Islander Art in the world – we feel privileged to have Ms Perkins join us to help share the diverse voices and cultures of Aboriginal and Torres Strait Islander artists and communities with all Australians and with growing audiences across the globe”.

“As the first (not actually!) large scale recurring exhibition dedicated to contemporary Aboriginal and Torres Strait Islander art and artists in Australia, the National Indigenous Art Triennial is an integral part of our artistic program. We are delighted to have one of the nation’s most respected curators and cultural voices at the helm of one of Australia’s most important exhibitions.”

The first iteration of the Triennial, Culture Warriors coincided with two significant anniversaries: the 40th anniversary of the 1967 Referendum and the 50th anniversary of NAIDOC (National Aboriginal and Islander Day Observance Committee). Culture Warriors along with subsequent exhibitions, unDisclosed in 2012 (curated by Carly Lane) and Defying Empire in 2017 (Tina Baum), consolidated a First Nations-led and centred major national survey exhibition within the Australian cultural landscape.

The appointment of Assistant Director for Indigenous Engagement, Bruce Johnson-McLean (ex Queensland Art Gallery) will be a support for the 4th National Indigenous Art Triennial, “and is an excellent barometer of the National Gallery of Australia’s commitment to Aboriginal and Torres Strait Islander culture, reflected in all areas of the Gallery’s operations,” said Ms Perkins.

Over a 30-year national and international career in First Nations visual arts, Ms Perkins has been recognised for her commitment to the curation, collection development and scholarship of Aboriginal and Torres Strait Islander art, as well as a focus on the mentorship and advancement of artists. In 1997 she co-curated Australia’s pavilion at the Venice Biennale with Brenda L Croft – who went on to curate the first Triennial. Perkins began her career at the Sydney gallery of Aboriginal Arts Australia before joining the Boomalli Aboriginal Artists Cooperative. Over 14 years at the Art Gallery of New South Wales, she expanded the collection, curated several major exhibitions, edited significant publications, and wrote and lectured extensively. She also co-curated, with Brenda L Croft, the Australian Indigenous Art Commission for the Musée du Quai Branly in Paris in 2006. In 2017, Ms Perkins won the International Council of Museums Australia award for outstanding individual achievement.

Meanwhile, the Fderal government has come to the party with more than $49 million for Australia’s Indigenous visual arts sector, providing new opportunities for Aboriginal and Torres Strait Islander artists and supporting a professional and viable visual arts industry.

“Indigenous-owned art centres are at the heart of Australia’s internationally renowned Indigenous visual arts movement and are an important contributor to local economies,” Minister Fletcher said. “The IVAIS funding will create new opportunities for Aboriginal and Torres Strait Islander artists from across the country and provide funding certainty to organisations that support their work,”

Funded projects include:
$70,000 in 2020-21 for First Hand Solutions Aboriginal Corporation to contribute to the delivery of the National Indigenous Art Fair in Sydney in 2021.
$550,000 over five years to support the Arts Law Centre of Australia’s Artists in the Black and Licensing the Right Way projects to improve licensing outcomes for First Nations artists and to build best practice within the Indigenous visual arts industry across Australia.
$240,000 over three years to support Numburindi Arts to provide services to visual artists based in the Numbulwar community on the Gulf of Carpentaria in the Northern Territory.

The funding announced today is in addition to $7 million of support for Indigenous artists and arts centres through the Relief and Recovery Fund COVID-19 package announced on 9 April 2020.

And the government’s National Cultural Heritage Account has stumped up the $600,000 for QAGOMA to acquire seven Papunya boards painted in the first critical years of Australia’s contemporary Aboriginal art movement. Purchased from the Ian Rogers Collection in Melbourne, the boards represent the work of the cream of the founding artists of the Papunya Tula Art Movement, which began in 1971.

All are very neatly framed in brown wood – and I’m not sure this reflects the rough and ready fire of creation in which they were made. 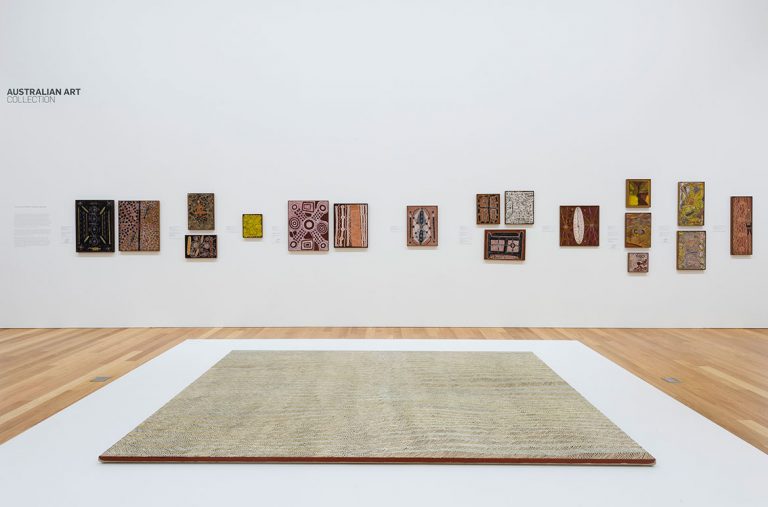 The seven early Papunya boards installed in the QAG with other Central Desert works and the horizontal canvas by Doreen Reid Nakamarra, ‘Untitled (Marrapinti)’ 2008

Where is the exhibition?