The Federal Bureau of Investigation (FBI), US, has revealed that Nigerian Instagram celebrity, Ramon Abbass popularly known as Hushpuppi, tried to defraud an English Premier League club of an amount of about £100 million.

Hushpuppi was arraigned in a US Court on Friday, July 3 where he faces multiple cybercrime charges.

US Court document sighted by DGN Online, says the US Department of Justice alleged that Hushpuppi led an opulent lifestyle on social media funded by a cybercrime syndicate involved in email compromise or BEC scheme, hacking corporate emails and tricking staff into making money transfers.

“Abbas maintains social media accounts that frequently showed him in designer clothes, wearing expensive watches and posing in or with luxury cars and charter jets. The FBI’s investigation has revealed that Abbas finances this opulent lifestyle through crime,” the court document read.

“Abbas and others further conspired to launder hundreds of millions of dollars from other fraudulent schemes and computer intrusions, including one scheme to steal £100m (approximately $124m) from an English Premier League soccer club,” the Department of Justice says.

If found guilty, Hushpuppi faces at least 20 years in a US federal prison.

Early June, Hushpuppi was arrested by the police in Dubai and Interpol over a £350million cyberscam.

He was part of some 12 persons arrested in a raid for their alleged involvement in various cyber crimes.

Investigators alleged that the suspects target victims overseas by creating fake websites for well-known companies and banks in a bid to steal victims’ credit card information and then launder the stolen money.

Hushpuppi allegedly portrayed a billionaire lifestyle on social media in order to lure victims from all over the world, including Europe, America and Nigeria.

He was handed over to the Federal Bureau of Investigation (FBI) in the US, together with Olalekan Jacob Ponle aka Woodbery, Dubai Police said on Thursday.

According to a statement, Christopher Wray, Director of FBI, praised the role of the Dubai Police in arresting Hushpuppi and Woodbery, and handing them over to the US.

“Director of FBI expressed his thanks for the exceptional efforts (of Dubai Police) in fighting organized cyber crimes and arresting Hushpuppi and Woodbery,” Gulfnews quoted Dubai Police.

Hushpuppi often posted pictures on Instagram with his luxury cars and private jet.

Police said the raid resulted in the seizure of incriminating documents pertaining to a well-planned international fraud worth Dh1.6 billion.

According to Dubai Police, the gang used to hack corporate emails and send fake emails to corporate customers to change money transfers to the gang’s personal banking accounts.

During the arrest, police found a huge amount of data on individuals, companies, bank accounts, credit cards as well as documents of money laundering, online fraud and hacking accounts of victims outside the UAE.

“The forged documents pertained to online fraud outside the country. The fraud was worth more than Dh1.6 billion. We seized more than Dh150 million in cash from them and confiscated 13 luxury cars worth Dh25 million,” Brig Al Jallaf said. 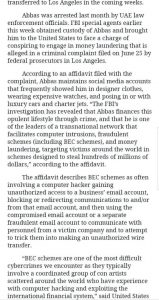 Western Cape calls for reopening of businesses, end to alcohol ban in the province – SABC News

Yellow flags but red at heart?

Right to Hunt and Gather Bill 2020 – Notice of Motion

After 6 Weeks, Victors Are Declared in 2 N.Y. Congressional Primaries