In an African forest, a fight to save the endangered pangolin

The prehistoric shape is hard to make out as it moves slowly through the gloomy forest, so trackers listen for the rustle of scales against the leaves to pick up its trail.

Their target is the long-tailed pangolin — a little mammal also called the scaly anteater, which will be lucky to survive to the end of this century.

The harmless creature has no defence against predators apart from its small size and a camouflage of brown scales covering its body.

Today, the world’s pangolin species are listed as either vulnerable or critically endangered.

The pangolin is considered the most-trafficked animal on the planet — the victim of mass poaching for bushmeat and sales of its scales, especially to China.

According to a study published in 2017 by the Conservation Letters journal, between 400,000 and 2.7 million of the animals are hunted each year in central African forests. 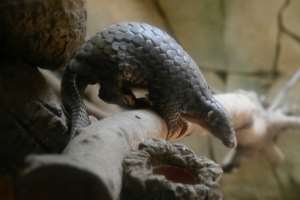 Their plight has leapt to worldwide prominence as a result of the coronavirus pandemic.

The microbe is believed to have leapt the species barrier in markets in China, where pangolins and other wild animals are killed for their meat.

After testing more than 1,000 samples from wild animals, scientists at the South China Agricultural University found the genome sequences of viruses found on pangolins to be 99 percent identical to those on coronavirus patients.

Anecdotal evidence from Gabon suggests that the bushmeat trade in pangolins has plummeted since the start of the COVID-19 pandemic — but wildlife experts say it is too early to say whether this decline will last, and what impact this will have on the creatures’ survival.

The Dzanga-Sangha National Park, in the far southwest of the CAR, is the last sanctuary for animal life in a poor country ravaged by civil war. Its dense forest offers one of the world’s few refuges for a species facing extinction.

In this haven, pangolin trackers have no interest in the creature’ meat or taking the scales that sell at phenomenal prices in Chinese traditional medicine for their supposed therapeutic qualities — claims that are scientifically unproven and strongly contested. 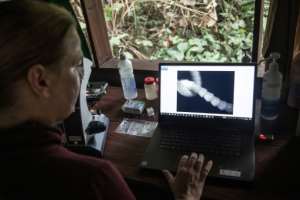 Researcher Maja Gudehus is leading a team in Dzanga-Sangha to study pangolins in their natural habitat, the better to understand their ways and to protect them.

The project is unique in Africa. While their meat is prized, little is known about pangolins scientifically. Gudehus wants to unlock knowledge about their longevity, territory, food, life habits and reproductive cycle.

“Virtually no data exists about the long-tailed pangolin and not much more about the other African species,” the Swiss scientist explained while watching her protege clamber in the branches overhead.

The animal is particularly easy to capture. When it senses danger, it curls up into a ball, which humans have but to pick up. But in captivity, it is one of the most difficult creatures to study.

“You can’t keep them more than a few days. They don’t eat, die from stress, gastritis, and other problems we don’t know yet,” Gudehus said.

The only solution is to monitor a few clearly identified specimens, with the help of Pygmies in the region. The knowledge of the Baka people, fine guides to the forest, is essential in tracking the fragile and fearful animals. 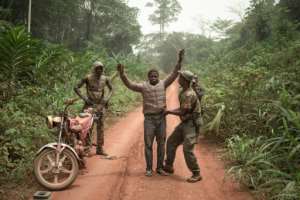 Of three creatures recently under observation, one has vanished and another was the victim of a hitherto unknown parasite.

“Normally one can tell when an animal is not well. But pangolins can die in half an hour without giving you time to notice,” said Gudehus.

Gudehus uses whatever she can to provide necessary treatment. Her laboratory is also her home, a tiny shack besieged by vegetation, where scientific literature and boxes of medical supplies are packed in between her microscope and a camp bed.

“We used to see many pangolins,” said Didon, one of the most respected Baka trackers in the region. “Today, they’ve become rare.” 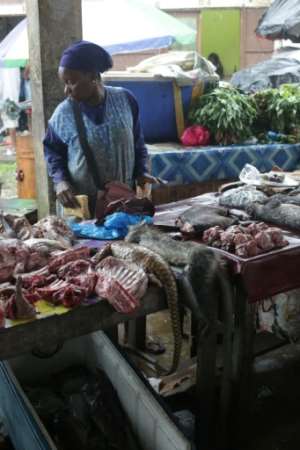 While all four African species of pangolin are present in the CAR and officially protected, the law is very hard to enforce. Two-thirds of the country are still in the hands of armed groups following a succession of conflicts.

“Unlike elephants, pangolins are very difficult to track, and it’s rare to be able to arrest poachers in the act,” said Luis Arranz, the national park representative of the World Wide Fund for Nature (WWF).

“We have to rely on seizures on the road and on our informers.” 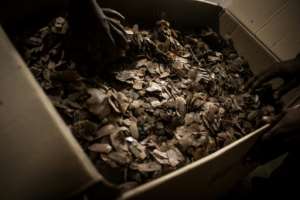 In the park’s offices, Arranz opened a metal door to give an idea of the scale of trafficking. Crates on shelves are overflowing with scales that had been destined for the Chinese market. The collection is valued at several hundred thousand euros (dollars).

US dollar rises, but off highs, as Fed measures weigh - SABC News

US dollar rises, but off highs, as Fed measures weigh - SABC News