It was two years in the making, but a recent collaboration between the Bábbarra Women’s Centre in remote Arnhem Land in the Northern Territory and Victorian-based homewares brand Kip&Co started selling out within hours of its release.

The vibrant collection of bedding, tableware and accessories features eight unique designs by seven female artists from Bábbarra, which is located in the community of Maningrida and is an enterprise of the Bawinanga Aboriginal Corporation.

The designs — created by Deborah Wurrkidj, Elizabeth Wullunmingu, Helen Lanyinwanga (deceased), Janet Marawarr, Jennifer Wurrkidj, Margot Gurawiliwili, and Raylene Bonson — tell the stories of their creator’s ancestors and their country, and have been transformed into quilt covers, sheets, tablecloths and aprons by Kip&Co, which has become known for its colourful aesthetic.

Profits from the collaboration are shared equally between the artists and Kip&Co, and according to The Design Files, The Copyright Agency was involved from the start to ensure the process was ethical and the licensing of the designs followed best practice.

The result is a beautifully designed example of how local businesses can collaborate with, and celebrate, Indigenous artists.

The idea for the collaboration was sparked two years ago when Bábbarra started researching brands that could help turn the artists’ designs into bedding, explains Jessica Phillips, Bábbarra’s first local Indigenous manager.

“The whole idea for the project came from our women governance group,” Phillips tells SmartCompany.

“We didn’t have the capacity to make products, so we started to look for an ethical Australian-owned, high-quality bedding brand to collaborate — ideally a female-run business.”

Phillips says Kip&Co, which was founded by Alex McCabe, Kate Heppell and Hayley Pannekoecke, was an “obvious” choice “and the artists from Bábbarra really liked their products”.

“Kip&Co donated a lot of their products to our Bábbarra op shop and the women got to see and feel the products,” she adds.

McCabe says the Kip&Co team were honoured to be chosen by the artists.

“We have long wanted to collaborate with Indigenous artists, but didn’t quite know where to begin,” she explains.

“Then, out of the blue in 2018, we received an email from a talented group of artists at the Bábbarra Women’s Centre in Maningrida Arnhem Land.”

That initial email kick-started a two-year collaborative process, which involved the artists at every stage — from selecting the artworks to be used, to deciding on the product range, colours, and even labels.

Get COVID-19 news you can use delivered to your inbox.

You’ll also receive special offers from our partners. You can opt-out at any time.

It culminated in McCabe, Heppell and Pannekoecke travelling to Maningrida with some of their children earlier this year (before travel restrictions came in) to meet the artists and reveal the final collection, which was released to the public in early-September.

For the Kip&Co founders, it was important not to rush this project.

“We thought a lot about the responsibility of using culturally significant artwork,” explains McCabe.

“We knew this collaboration would require a much more involved partnership that ensured the artists had a clear leadership position … and were involved every step of the way as key decision-makers on every aspect.

“While that meant a much longer project timeline for us than any collaboration we’ve done, it was absolutely worth taking things slowly. I think the end product has a much deeper meaning, resonance and connection as a result.”

The 50-50 profit share arrangement is an important element of the collaboration and McCabe says they hope it will set a benchmark for future collaborations.

At Bábbarra, Phillips says the income from the collaboration will support the artists and their families.

“Many of the women are leaders and breadwinners in their families,” she explains.

“The income will support artists in practice and creativity at Bábbarra, and enable them greater financial independence.”

Phillips says 100% of Bábbarra’s share of income from the collaboration will stay in the community and support women in Maningrida.

“The income will be re-invested back into Bábbarra Women’s Centre to support our operations in printing, sewing, laundromat, retail and supporting our women centres on homeland,” she adds. 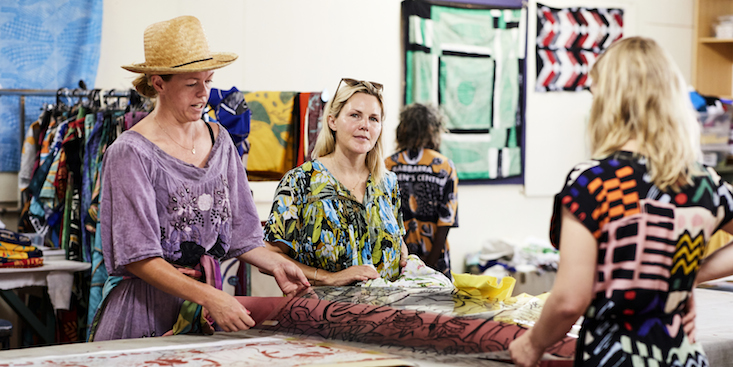 The Bábbarra Women’s Centre was initially founded as a women’s refuge in 1983, and has since become a hub for creative work.

Women from different language groups in the community come together on a daily basis to do screen printing, lino cutting and sewing in a space that is also run by women.

Bábbarra is “governed by women, for women”, says McCabe, and the Kip&Co team immediately connected with these values.

“The centre was initially created as a safe space for women, and has now grown into a creative hub that enables future enterprises to support healthy and sustainable livelihoods,” she says.

The fact that the project would be an all-female collaboration was something the Kip&Co team also loved, being a female-founded and operated business since its beginning in late-2010.

When McCabe, Heppell and Pannekoecke decided to launch the business, they were each looking for a new challenge, explains McCabe, and a creative outlet they could fit in around other priorities, such as full-time work and their families.

The trio decided to create a homewares brand after Heppell found a colourful bedspread while on holiday in the US, and they spotted a gap in the Australian homewares market for designs that spoke to a colourful and vibrant aesthetic.

Kip&Co’s designs are now sold by around 250 stockists around the world, and the company has eight full-time employees, including three in India where most of its manufacturing is done, as well as two part-time employees.

McCabe says it’s “very” important for Kip&Co, as a female-founded business, to support other creative women and women business owners.

“I’ve had some incredible female role models, who’ve lifted by and other women up. One of the first people I worked for was Kate Jenkins, the now sex discrimination commissioner at the Australian Human Rights Commission, so she set the bar high!”

The founder says she’s also seen, and experienced, “how damaging the reverse can be, where women tear other women down”.

“Particularly now, when female-dominated industries have been disproportionately impacted by coronavirus, I really believe it is a responsibility as a women, and just as a good person, to look out for each other,” she adds. 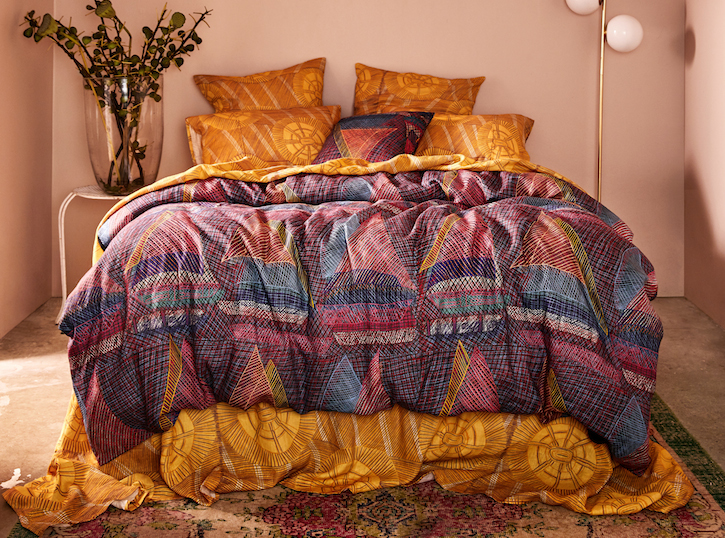 Some of the products featured in the Bábbarra and Kip&Co collection. Photo by Caitlin Mills Photography for Kip&Co and Bábbarra Women’s Centre, used with permission.

While both Phillips and McCabe say it is too early to say if they will look at doing more collaborations like this one in the future, both Bábbarra and Kip&Co have learnt a lot from the experience.

And they have some advice for other businesses interested in following their steps.

“It takes time to sit and let the details process with the artists on what the project is about and what they want.

“There are lots of considerations, and it’s very important to get it right.”

“There are approval processes and protocols in the cultural communities, as these can affect families in the long term if something has not been done correctly.”

McCabe recommends letting artists “set the pace” for any collaborations and advises businesses to “not try and impose a business-as-usual model”.

“I think having the independent third party, appointed by the artists, was a really significant moment for us,” she says.

“It gave the artists and us the confidence to move forward together and I would definitely recommend for others to do the same.”

More information about each of the artists featured in the Bábbarra and Kip&Co collaboration is available here.

You can help us (and help yourself)

That’s our job at SmartCompany: to keep you informed with the news, interviews and analysis you need to manage your way through this unprecedented crisis.

Now, there’s a way you can help us keep doing this: by becoming a SmartCompany supporter.

Even a small contribution will help us to keep doing the journalism that keeps Australia’s entrepreneurs informed.