One of the most alarming statistics about black men in America is that 1 in 3 will be imprisoned in their lifetime. Mass incarceration is a multibillion-dollar business and black men and people of color face extreme racial disparities in the criminal justice system beyond crime rates. To date, there are 2.2 million people in the nation’s prisons and jails—a 500% increase over the last 40 years according to The Sentencing Project.

Of those 2.2 million men and women, 2,656 people are on death row and face execution by the state according to the Death Penalty Information Center. Over the years, policymakers, activists, and lawyers have fought to eliminate the death penalty and decrease the numbers of inmates sentenced to capital punishment. As a result, the death row population has declined for 18 consecutive years and deaths by other causes are outpacing new death sentences.

Public interest lawyer Bryan Stevenson, founder and executive director of the Equal Justice Initiative, a human rights organization in Montgomery, Alabama, has committed the last 30 years of his life and career advocating for the wrongly convicted, disadvantaged, and forgotten within the criminal justice system.

Over the span of his career, Stevenson and his staff have won reversals, relief, or release from prison for over 135 wrongly condemned prisoners on death row and won relief for hundreds of others wrongly convicted or unfairly sentenced.

Walter McMillian, an innocent black man, wrongfully convicted of murder and sentenced to death row before ever going to trial was Stevenson’s first client and person to be exonerated from the death penalty Alabama.

At the time, Stevenson was an ambitious Harvard law graduate whose mission was to seek justice for marginalized people. Little did he know in 1989 that he was on the brink of making history.

“I just was trying to respond to a crisis encountered as a young lawyer. I was meeting people who were literally dying for legal assistance. I was outraged that people could be wrongly convicted, and no one seemed to care. It was really all about just meeting their needs and securing their freedom. It’s been great to see how these triumphs and standing up for something that’s important has resonated with people and given rise to this broader movement.

In the new motion picture, Just Mercy, Stevenson’s journey as an attorney, his fight for McMillian’s freedom, and McMillian’s life is presented in an intricately beautiful way.

In anticipation of the movie, Stevenson opened up about his life’s work, Walter McMillian, and the criminal justice system and what it’s like to see his journey be displayed on the big screen portrayed by actor Michael B. Jordan and Jamie Foxx who portrays McMillian. And he says that while it is surreal he is glad that the story made from his critically acclaimed book, Just Mercy.

“Meeting Michael and working with Destin [Daniel Cretton] the director, gave me a lot of confidence that we could do this [create the movie] because not only are they incredibly talented creative people; they’re both dedicated. They’re both committed to these issues. And that gave me confidence and then when the rest of the cast got involved, I became more hopeful for seeing it was really so affirming and exciting. I’m really proud of the film, I think it’s going to hopefully get people to think critically about these issues that we’ve ignored for too long.” says Stevenson.

Fighting for a community

Communities and families receive unfair sentences when loved ones are wrongfully convicted. 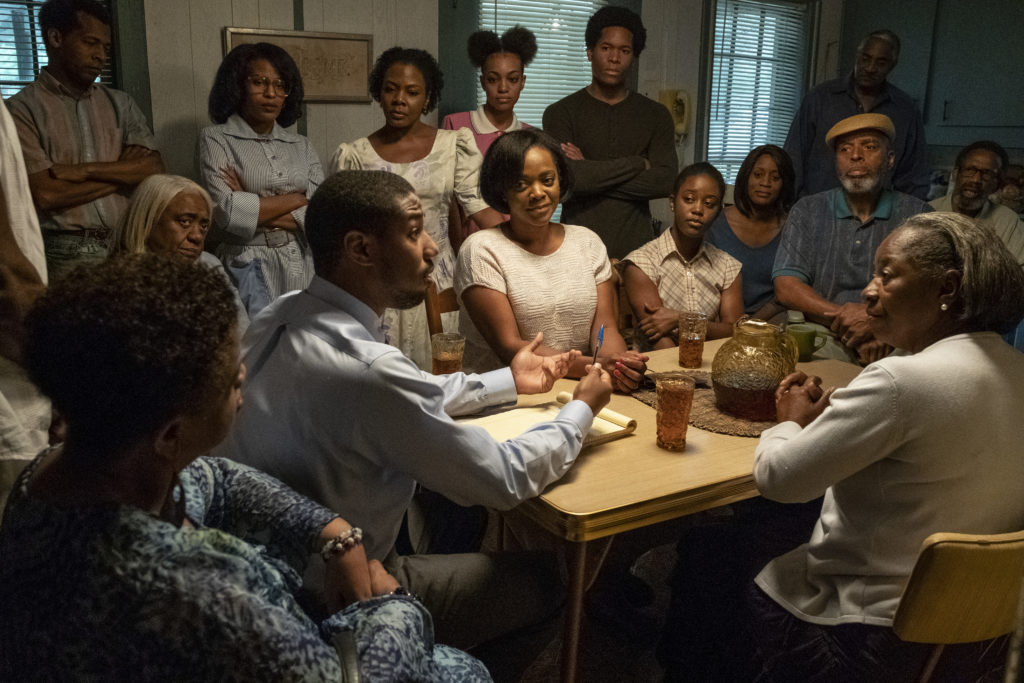 Twenty-six years after McMillian’s exoneration, Stevenson is hopeful that his story is going to restore hope for the families and communities of people impacted by mass incarceration and wrongful convictions.

Everyone in a relationship with people who are imprisoned is impacted by the absence of their loved one. In the case of McMillian, his wife Minnie McMillian, their five children, and his entire community experienced loss during the six years he was behind bars.

In Just Mercy, Karan Kendrick portrays Mrs. McMillian who is a powerful woman of few words who leads her community. In America, there are 132 million people who have family members in jails or prisons or who have been in jails and prisons.

For Kendrick, bringing Mrs. McMillian’s life to the big screen came with a great sense of personal responsibility to relieve black women from unhealthy bonds with strength; to highlight the significance of unconditional black love, and display the sacrifice that black women often make when black men are removed from the household and their communities.

Kendrick’s portrayal of McMillian is a powerful depiction of black women and their humanity.

Kendrick adds that McMillian’s silence is a different form of survival.

“There are certain moments when she isn’t saying anything, and you feel the hurt. You feel the pain and you feel the other things that are happening inside of her. My hope in my work is to present as fully and wholly as I can a black woman who is not a stereotype or a monolith—but a whole woman. I like to try to pull the curtain back and show parts of us that you won’t see unless we allow you in. In doing so, we begin to not only better understand each other but understand black women as human beings,” says Kendrick.

Black women are often in the fight for justice for their loved ones, the world, and members of their community. What Kendrick wants viewers to leave the theaters thinking after watching how Mrs. McMillian fought is that we have to show up no matter what that looks like.

Stevenson and Kendrick are hopeful that Just Mercy, the motion picture, will continue to the much-needed conversation about justice and the power of community.

In the words of Stevenson, “Hopelessness is the enemy of justice.”