Hollywood legend Kirk Douglas once asked Australian billionaire Kerry Packer to fund a movie in which he would play a cowboy brought Down Under to shoot kangaroos and ‘Abos’.

Douglas pitched the idea to Packer and his then film production company partner Phillip Adams while in Melbourne to film The Man From Snowy River in the early 1980s.

Packer rang Adams to say Douglas wanted the pair to look at ‘an amazing script’ for an Australian western in which he would star as an American sharpshooter called Quigley.

A meeting between Douglas and Adams, which started pleasantly but did not end well, featured the the late actor repeatedly referring to Aborigines by the derogatory term ‘Abos’.

Scroll down for video 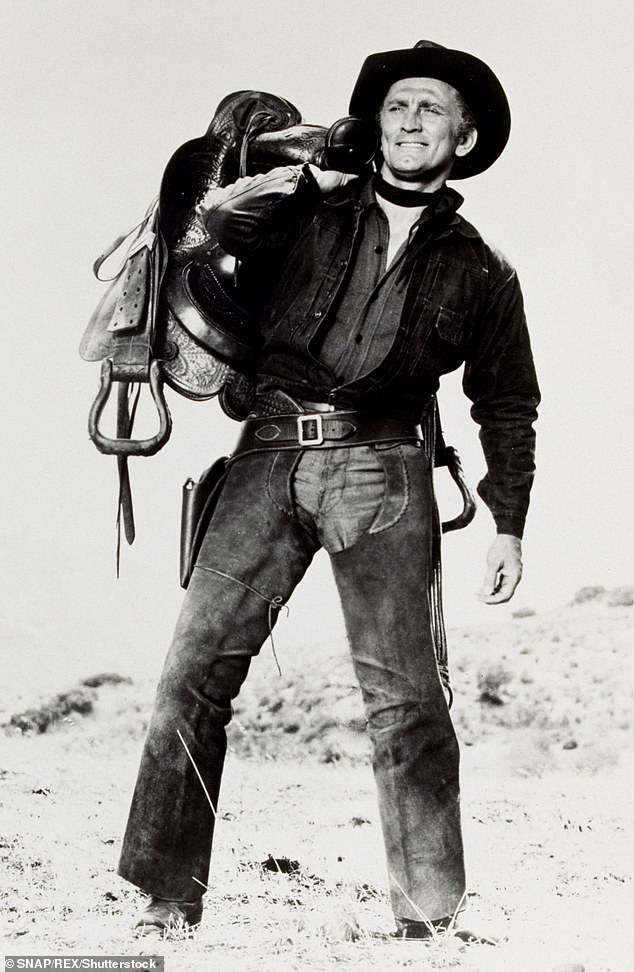 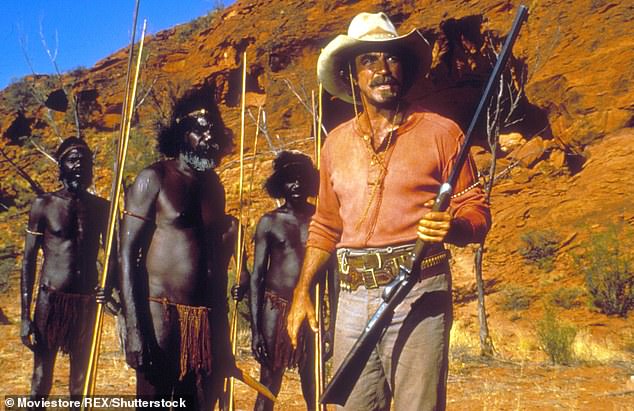 Tom Selleck eventually took on the role of Matthew Quigley in the 1990 film Quigley Down Under (pictured). His sharpshooter character turns down a job on an Australian cattle station when he learns his main role will be to eradicate Aborigines

Adams greatly admired Douglas for his stand against the mid-20th century Hollywood blacklist when industry members suspected of being communist sympathisers were shut out.

Turning up to meet Douglas at his hotel suite near the Melbourne Cricket Ground, Adams was greeted at the door by the actor’s wife Anne Buydens.

Adams explained what happened next in a column for the Weekend Australian Magazine.

The star of Spartacus and Paths of Glory handed him a script, which Adams immediately returned and asked Douglas to summarise for him.

‘It’s the 1860s and I’m an American cowboy,’ Douglas told him. ‘And a ranch owner in Western Australia brings me over to shoot roos and Abos.’

When Douglas said his character would undergo a change of heart in his new job, Adams asked, ‘About the roos?’ and Douglas replied, ‘No, the Abos.’

At the time Adams was adapting Jeannie Gunn’s autobiographical novel We Of The Never Never for the big screen, telling the story of a privileged white woman’s frontier life among Aborigines on a Northern Territory cattle station. 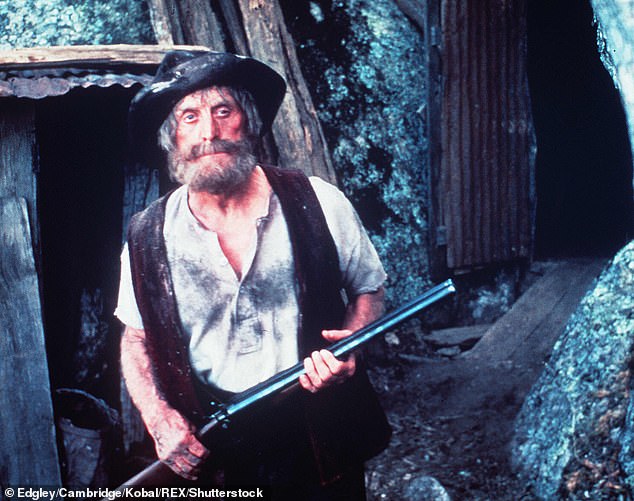 Douglas pitched a script for the movie which became Quigley Down Under while preparing to play the twin roles of Harrison and Spur in The Man From Snow River. He is pictured in a still from that 1982 film directed by George Miller

He had been dealing with the book’s depiction of Aborigines as inferior in most white people’s eyes and the main character’s kind but patronising attitude towards them.

The proposed Douglas movie was far more culturally insensitive and its ludicrous plot showed a profound ignorance of Australian and Aboriginal history. 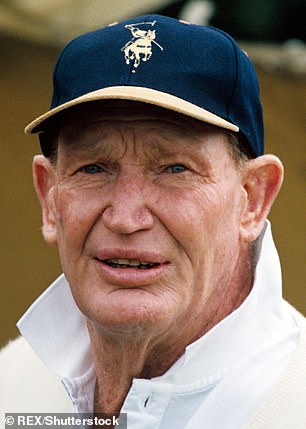 Douglas explained that his character Quigley would eventually lead an almighty ‘revolution’ of Aborigines against their oppressors.

Adams recalled Douglas making a ‘sweeping CinemaScopic gesture’ as he built up to describing the film’s climax.

‘There’s a big bare hill,’ Douglas told him. ‘And I come over the top riding tall in the saddle and behind me are 10,000 Abos.’

Historians have estimated at least 40,000 Aborigines were killed in frontier conflicts between European arrival in 1788 and the 1930s, along with up to 2,500 white settlers.

Nothing like what the Douglas film would have depicted ever occurred and the actor got angry when Adams said he and Packer would not produce it.

Adams told Douglas his script seemed to confuse Aborigines with Zulus, who were shown in their thousands battling British troops in South Africa in films such as Zulu and Zulu Dawn.

Another version of the Douglas screenplay was eventually filmed as Quigley Down Under starring Tom Selleck in the title role with Simon Wincer directing. 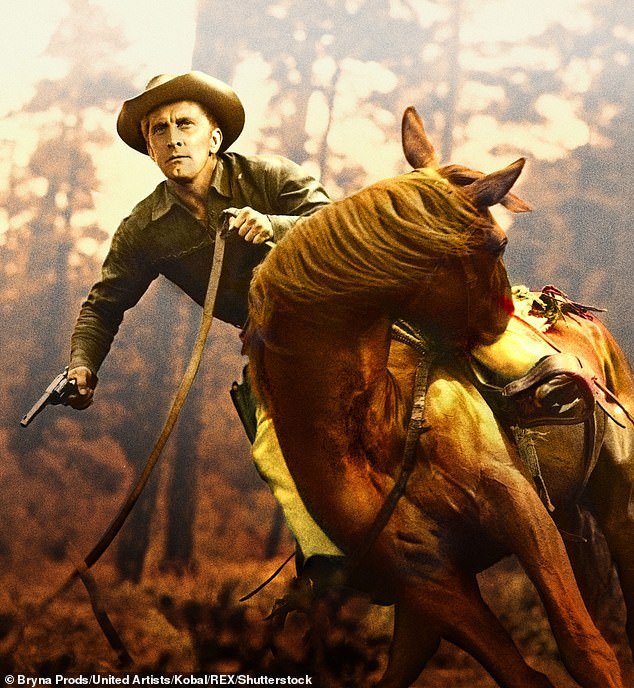 ‘It’s the 1860s and I’m an American cowboy,’ Douglas told Phillip Adams. ‘And a ranch owner in Western Australia brings me over to shoot roos and Abos.’ Douglas is pictured in the 1955 western Man Without A Star

In that 1990 joint Australian-American production Selleck’s character Matthew Quigley is hired by a cattle station owner for his sharpshooting skills.

When Quigley arrives in Australia he refuses the job when told it is to eradicate black people. He is beaten up by the station owner’s men and dumped in the desert where he is rescued by Aborigines.

Quigley then engages in a war with the station owner, played by Alan Rickman, whose men he stops from driving Aborigines over a cliff.

He becomes a hero to the local indigenous people who in one scene line the hills to scare off a band of soldiers when they come to capture the marksman.

Quigley Down Under has a 60 per cent rating on the review aggregation website Rotten Tomatoes.

Adams said Douglas was ‘genuinely heroic in his efforts to make Hollywood better, braver, more inclusive’ and the pair dined together after he rejected the Quigley project.

‘He really did come over a few big hills,’ Adams wrote. ‘Riding tall in the saddle.’ 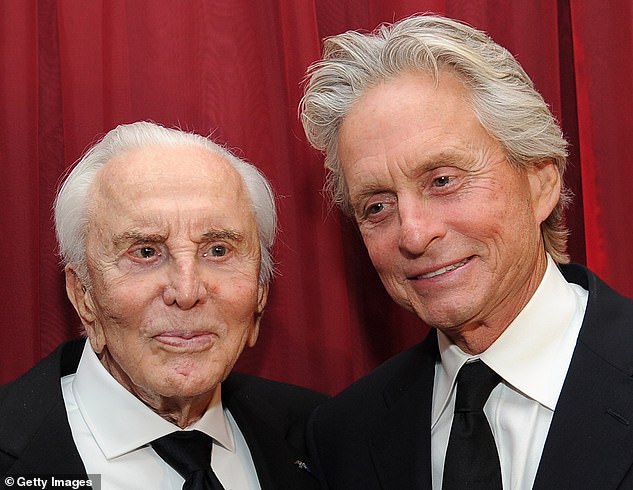 Douglas, father of Oscar-winning actor Michael Douglas, died in California on February 5 aged 103. He is pictured with Michael in California in 2011