As journalists and pundits dissect exit polls to find new stories to tell about the 2020 election, the role of voters of color—and Latinx voters in particular—has gotten a lot of buzz. With shifts in a few heavily Latinx districts toward Trump over 2016, the press has latched onto a narrative that Democracy Now!‘s Juan González (11/11/20) says misses the forest for the trees: 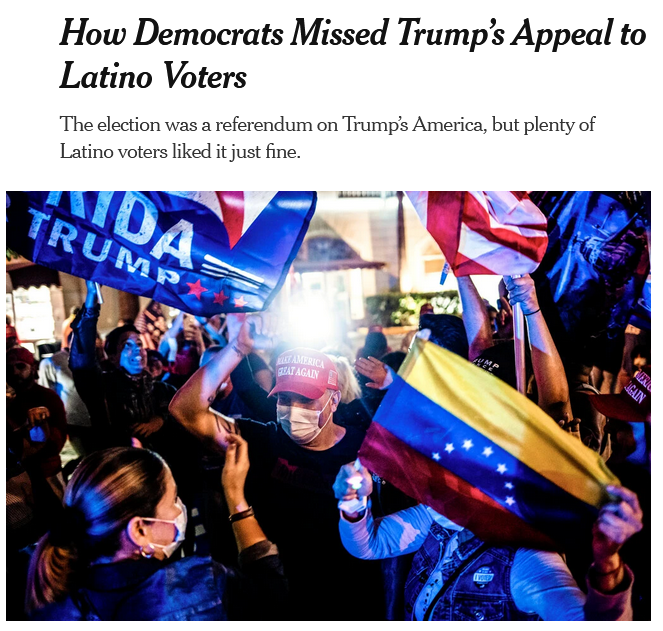 The cascade of stories continues, claiming a surprising turn by Latino voters toward Donald Trump. The New York Times this week, front page, “How Democrats Missed Trump’s Appeal to Latino Voters.” Then, the LA Times, “Latino Voters Tired of Being Taken for Granted by Baffled Democrats.” CNN and others claiming there’s no such thing as a Latino bloc. And even the Intercept saying in one of their stories that “Nonwhite Voters Are Not Immune to Right-Wing Populism.”

Well, I said last week, and I’ll repeat it again, the key narrative of this election is not whether there was a small shift in the percentage of Latinx voters in some areas of the country turning toward Trump. The main story is that in an election which saw historic turnout, people of color—and especially Latinos—had an unprecedented increase in voting. And they, not white voters, represented the bulk of that increase.

Virtually none of the reports have mentioned this, that for the first time in US history, Latinos’ turnout appears to have reached comparable levels to the rates for white and Black Americans. 20.6 million Latinos went to the polls in this election. That’s 64% of the 32 million eligible Latinx voters, while in previous election cycles, the turnout had been routinely below 50%. In raw numbers, 8 million more Latinos voted this year than in 2016. That’s a 63% increase over the last presidential elections…. The next biggest jump, in percentage term, came among African-American voters, who increased by 20%, Asian Americans by 16%, while white voters increased by just under 6%….

But what about those who claim that Trump made major, unexpected inroads among Latino voters nationwide, as reflected by 66-to-32% split of the Latino vote between Biden and Trump? Some say that Latinos could be deserting the Democratic Party. Those of us who’ve been around the block a few times have heard this narrative before. In reality, these results are in the general ballpark of previous presidential campaigns….

The Republican share of voters has varied, from a low of 27%, when Mitt Romney ran against Barack Obama in 2012, to a high of 44% that George Bush got in his second presidential run in 2004. Even John McCain, when he ran against Obama in 2008, got a similar percentage of the Latino vote as Trump did this year. And the high point, the Bush victory in 2004, we should note, is the last time a Republican candidate got a majority of the popular vote

But the big difference now is that the Latinx vote is so much larger. When you get two-thirds of a vote that has tripled in size in just a few years, you begin to achieve critical mass. No wonder Lindsey Graham is warning that if these elections aren’t changed somehow, Republicans will never win the White House again.

While pundits obsess over the idea that the Latinx vote brought down Biden in Florida and Texas (both of which Clinton lost as well, though with a larger share of Latinx support—62% vs. 53% in Florida, 61% vs. 58% in Texas), the role of the Latinx vote in other key states was underplayed:

It seems clear, however, that Latino turnout in states like Nevada, Arizona and Pennsylvania helped Biden win those key battleground states.

And then there’s California and New York. The Latino share of the vote that went to Biden appears to be breathtaking in those states: 77% in California, 72% in New York. Now, some argue that those are reliable blue states anyway, so those Hispanic voters are not really critical. Really? Aren’t those enormous Latino margins year after year what has made those states reliably blue? And the same for New Jersey, Connecticut, Massachusetts and, lately, Colorado.

All of this fixation on Latinos, however, ignores the fundamental question of this election, which very few political observers I’ve seen have dared to tackle: Why the heck did 58% of white Americans vote for Donald Trump, including 55% of white women? With the United States consolidating itself as the world’s most powerful imperialist nation and the economic gap in the country widening, right-wing movements have only grown at home, and the defeat of Trump will not halt their growth. The key to building a progressive majority is to keep mobilizing more young Latinos to vote, burying the small percentage increases in support for right-wing candidates under an avalanche from people of color, organized labor and their allies. 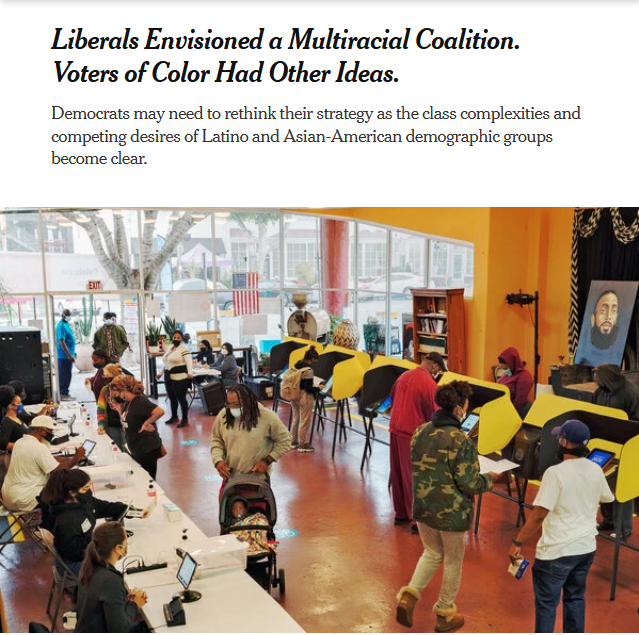 The New York Times‘ Michael Powell (11/16/20) offered just one example of this kind of unhelpful reporting in his piece, “Liberals Envisioned a Multiracial Coalition. Voters of Color Had Other Ideas”:

The election presented complications wrapped one inside another for Democrats. In Texas and Florida, in California and in Colorado (where New York Times exit polls found that roughly 40% of white voters and 38% of Latino voters cast ballots for President Trump), the assumption that people of color would vote as a liberal Democratic bloc often proved illusory.

Community activists and others have argued that the Democratic Party has failed to court Latinx voters to the same extent that it courts white voters (ABC, 11/1/20; New York Times, 11/3/20), and that both its outreach and responsiveness to voters of color across the board is sorely lacking. But the fact that Latinos only voted for Biden by a 20-point margin in Colorado, versus the 16-point margin among white people, seems an odd example of a complication for Democrats, and the “assumption” that people of color would vote as a bloc is a straw man. No half-astute observer assumes all people of color will vote Democrat. They do assume that the margins overall will be much more skewed toward Democrats than among white voters—and this was yet again borne out by the exit polls.

It’s important to remember that any analysis based on exit polls is just as tentative as analysis based on other polling, which proved flawed yet again this election. (As one political scientist told Wired—11/11/20—”Exit polls are garbage.”) And exit polling of subpopulations (like Latinos) in particular shouldn’t be relied on as truth, as they have even larger sampling errors than the overall population; the polling outfit Latino Decisions (11/10/16) sharply criticized 2016 exit polls that claimed a surprisingly high Latinx vote for Trump in the last election. Their 2020 election eve poll found Latinx support for Biden and Trump at 70–27.

But regardless of which numbers are closer to reality, there’s no disputing that the Latinx vote surged, and that it broke hard for the Democrats—but that story clearly wasn’t as appealing to election spin doctors eager to find fault with the groups most responsible for Biden’s victory.

Victorian budget hit and miss: strong on community but light on business

Victorian budget hit and miss: strong on community but light on business