“For the first time from the National Maritime Museum Collection, we bring together works by Zenadth Kes (Torres Strait Islands) artist Alick Tipoti.

With over 25 years of art practise, Tipoti is respected for his work in regenerating cultural knowledge and language. Guided by the traditional cultural practices of his people, Tipoti’s storytelling encompasses traditional cosmology, marine environments and ocean conservation – focusing on what it means to be a sea person”.

On top of that, the ANMM’s small but perfectly-formed exhibition – ‘Mariw Mineral/ Spiritual Patterns’ – can also lay claim to being the best First Nations exhibition currently on in Sydney. Don’t miss it, and don’t be lead astray by the blandishments of the touring National Indigenous Art Triennial (actually a Quinquennial) show, which is hugely reduced version of the 2017 event in Canberra that I always thought limited by its selection of 19 Blak artists from the south and only a handful of artists of the classical stature of Tipoti.

For, as the Torresian makes clear in his exhibition, “Without your language you become a foreigner, lost in another person’s culture” . And one might argue that the language-less southerners (with the heroic exception of Jonathon Jones and his increasing sense of the Wiradjuri) are so concerned with ‘Defying Empire’ (the title of the show) that they’ve failed to note that their linguistically-specific sisters and brothers in the North have accommodated that dying empire and moved on – backwards and forwards into their Dreaming.

Sadly, some of the finest examples of that progress have been left behind in Canberra – especially the suite of huge barks by Nonggirrnga Marawili, the late Rusty Peters’ massive night sky over ‘Yariny Country‘ which he died trying to save from mining, and all of Pedro Wonaeamirri’s Tiwi Pukumani Poles. Oddly, an exception is Archie Moore’s A for Anarchy revitalisation of the Aboriginal flag, which achieves greater power from recent discussions about the licensing of the official banner.

The sort of balance that Alick Tipoti achieves between the traditional carving of his ancestors and the mighty and intricate linoprint works he makes today, not to mention the high-tech skills necessary to create his bronze ‘Dugong/Kisay Dangal‘. For it’s not just a sinuously observed moment in dugong life when the creature is poised to dive into the depths to feed, but there is an accumulation of understanding of the dugong’s life cycle and its spiritual value to the Zenadth Kes people carved into its surfaces.

No wonder this powerful artist so impressed Prince Albert of Monaco during a 2016 exhibition in that Principality – where Tipoti supplied a design to cover a whole museum roof – that the Prince came to tiny Badu Island in 2018 to discuss Badulgal culture and the environmental problems of the Torres Strait caused by climate change and the plastic pollution of the seas. I wonder whether any of our politicians have similarly made the trip to Badu?

This whole exhibition seems to be part of the ANMM’s Collection – and it’s tremendous to discover that the museum’s remit extends beyond boats and white voyaging to include a flying ghost net boat from Badu’s neighbour, Erub. Much of this collection would seem to have come via funding from Sid Faithfull and Christine Sadler to support Contemporary Indigenous Maritime Heritage in Far North Queensland and the Torres Strait Islands.

With the Tipoti show, their funds have extended beyond buying the bronze dugong to several films of traditional performance, some splendid linocuts – such as the ‘Headhunter‘ who’s on speaking terms with the skull of one of his victims and the artist’s only known self-portrait – to curatorial work which explains just some of the rich and complex details that goes into one of Tipoti’s largest 3-metre works. What appears to be dominated by four preening figures also contains a wealth of flora and fauna, recognises the importance of weather on these sea-girt specks of rock and the fruits of each season, and throws in the mnemonics of the traditional characters associated with each season.

In ‘Defying Empire‘ Alick Tipoti’s fellow Badu artist, Laurie Nona declares, “as long as the warup/drum is beating, our culture is still alive”. We can hear and see that mighty drum thrumming in ‘mariw-minaral‘ and it’s clear how seriously Tipoti takes this cultural maintenance. That he can communicate the essence of his distinctively different culture across seas and land to Sydney and Monaco and then link it to our common problems of plastic pollution and climate change reveals an artist who is anything but lost. 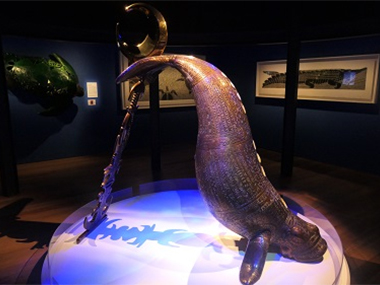 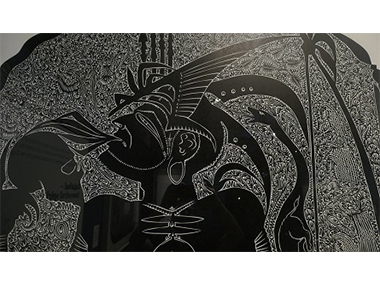 'Not acceptable': Australia's long battle with racism in sport - Sports