Meet the 1st African-American quadruplets who toured White House in 1962, they are all identical (photo)

General |
Meet the 1st African-American quadruplets who toured White House in 1962, they are all identical (photo)

Oldest known motorcycle to be showcased at an exhibition (photo)

The very first African-American quadruplets on record who were popularly known as the Fultz Quadruplets were famous for being strikingly identical and were even allowed to tour the White House in 1962.

A report sighted by Legit.ng on the official Facebook handle of US embassy Ghana indicates that the tour took place on August 2, 1962, when Mary Alice, Mary Louise, Mary Catherine, and Mary Anne were brought into the White House.

It is indicated that the Fultz Quadruplets were just on a tour of the White House when the then president John F Kennedy emerged in the Rose Garden. 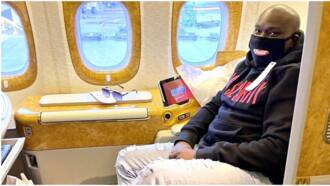 The assistant White House press secretary, Andrew J Hatcher, introduced the president to the quadruplets, and they posed for a rather historic photo.

These quadruplets from Milton, North Carolina, who were 16-years-old at the time, were a medical wonder, widely followed by the American public after their birth on May 23, 1946.

After their discovery, different sets of black quadruplets started to spring up at different locations all around the world.

Meanwhile, Legit.ng previously reported that a 30-year-old mother of 12 in Kaduna state identified as Zainab Hassan delivered quadruplets without healthcare.

When Zainab went into labour, she delivered her babies at home herself because the nearest hospital is far away, and she can only reach it via commercial canoes and then bike, Vanguard reports. Coronavirus in Italy: Pope sick a day after he hugged, met people with masks

The mother of 12 who has had twins in the course of childbearing never went for antenatal for all the pregnancies she had carried.

She said: “I have been giving birth to twins in this village without going for any medical checks. This time I delivered all four kids at my husband’s house without any assistance from anyone.”

Zainab said she went through serious pains and stress, adding that it is not really easy giving birth to quadruplets in a village without any support.

She added that she always used traditional medicine from local vendors whenever she was feeling pain.

NAIJ.com (naija.ng) -> Legit.ng We have updated to serve you better

Chuka is an experienced certified web developer with an extensive background in computer science and 18+ years in web design &development. His previous experience ranges from redesigning existing website to solving complex technical problems with object-oriented programming. Very experienced with Microsoft SQL Server, PHP and advanced JavaScript. He loves to travel and watch movies.