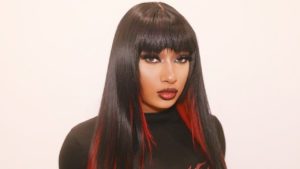 The takeover from Megan Jovon Ruth Pete, you may know her as Megan Thee Stallion, has transformed into the gaming world as the bodacious rapper becomes one of Mortal Kombat’s popular character, Mileena, in an Instagram post. The latest Mortal Kombat (Mortal Kombat 11 Ultimate)will be released November 17 on Xbox Series X|S and Xbox One.

The Instagram post has been viewed over 1,781,466 times since then she released the visual several days ago.

Megan, who had just recently wrote a New York Times opinion piece titled titled “Why I Speak Up for Black Women” has had her share of publicity lately. The controversial rapper—who is still riding on the charts with her appearance on Cardi B’s latest single, “W.A.P.”— had stated that the rallying call to “protect Black women” should not be controversial.

She had also written in the piece, “In the weeks leading up to the election, Black women are expected once again to deliver victory for Democratic candidates. We have gone from being unable to vote legally to a highly courted voting bloc — all in little more than a century.

“Despite this and despite the way, so many have embraced messages about racial justice this year, Black women are still constantly disrespected and disregarded in so many areas of life.”

Just last month, Megan drew the ire of Daniel Cameron who said it was ‘disgusting’ that she made “disparaging comments about” him when she came to the defense of police killing victim, Breonna Taylor.