Jacinda Barclay tragically took her own life on October 12

Devastated family and friends have attended the funeral of an Australian sporting star after she look her own life aged just 29.

Around 600 mourners turned out at Jacinda Barclay’s funeral in Perth, 11 days after the celebrated Australian athlete committed suicide on October 12.

Her one-of-a-kind personality meant there was an eclectic mix of mourners on hand to say their final farewell, including athletes, artists and Maori and Aboriginal elders wearing traditional tribal paint.

Barclay’s cherished Australian baseball shirt was draped over her coffin during the outdoor service at Pinnaroo Valley Memorial Park, in Perth, on Saturday morning.

Beside it was an three metre-high picture collage of Barclay donning her beloved orange jersey for the Greater Western Sydney Giants.

Despite the shock and emotional pain, heartbroken mourners wanted to make the service a celebration of her life both on and off the field, rather than focusing on her sudden death.

Alan McConnell, who coached Barclay at the Giants, gave a stirring eulogy at the memorial after being given special permission by the Western Australian Government to travel to Perth from Sydney. 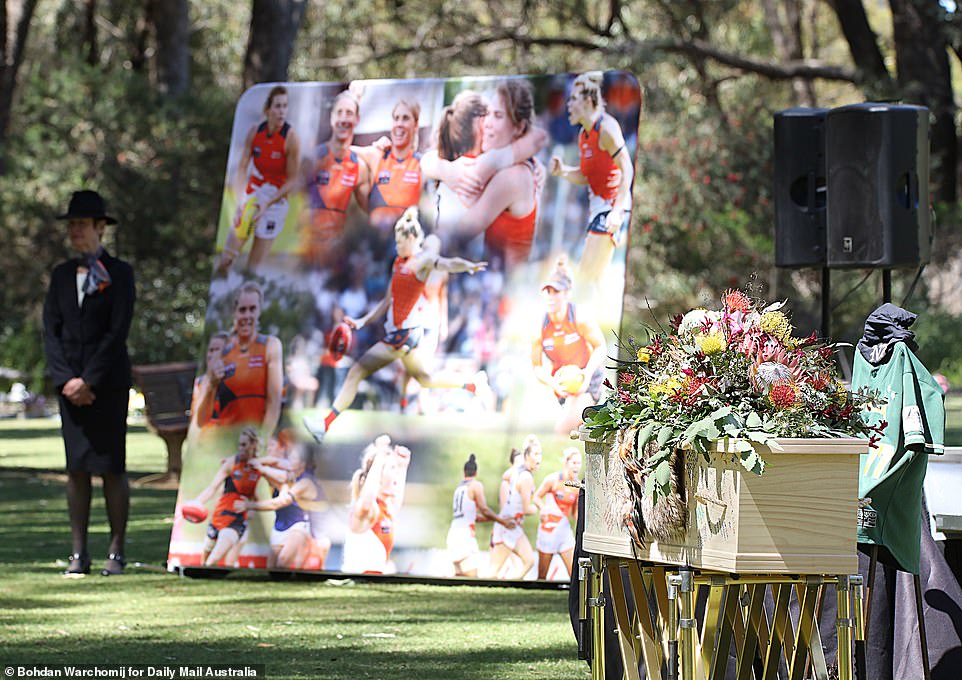 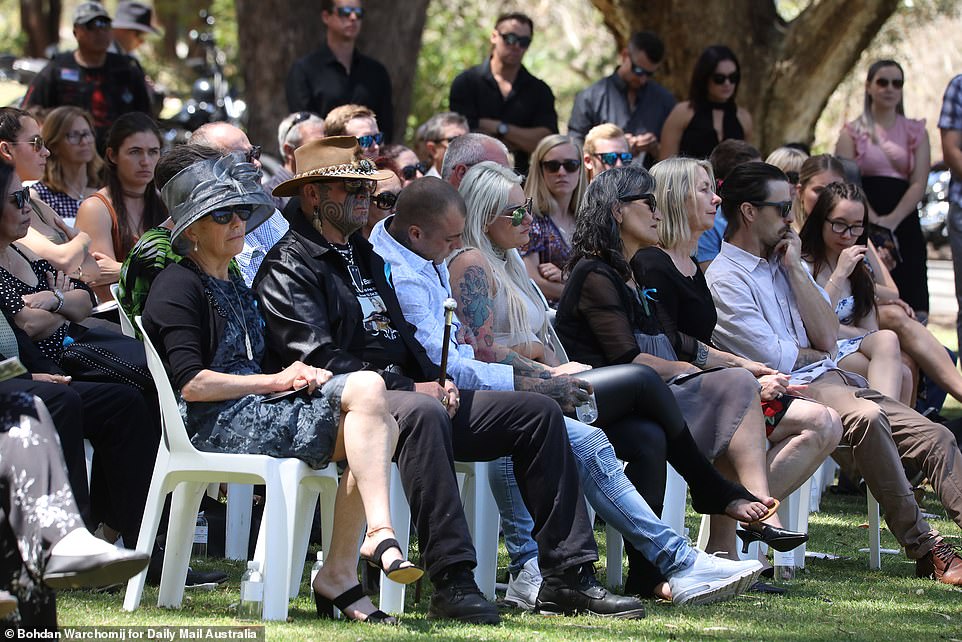 Hundreds of mourners turned out at Jacinda Barclay’s funeral in Perth, 11 days after she took her own life on October 13 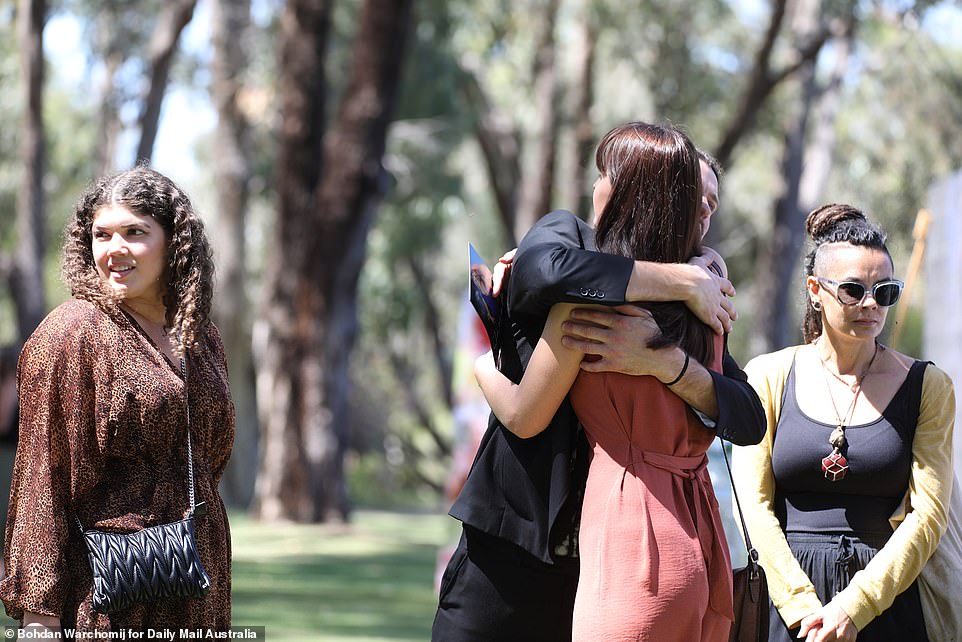 Gone but not forgotten: Loved ones of Barclay embrace each other at the heart-wrenching funeral service 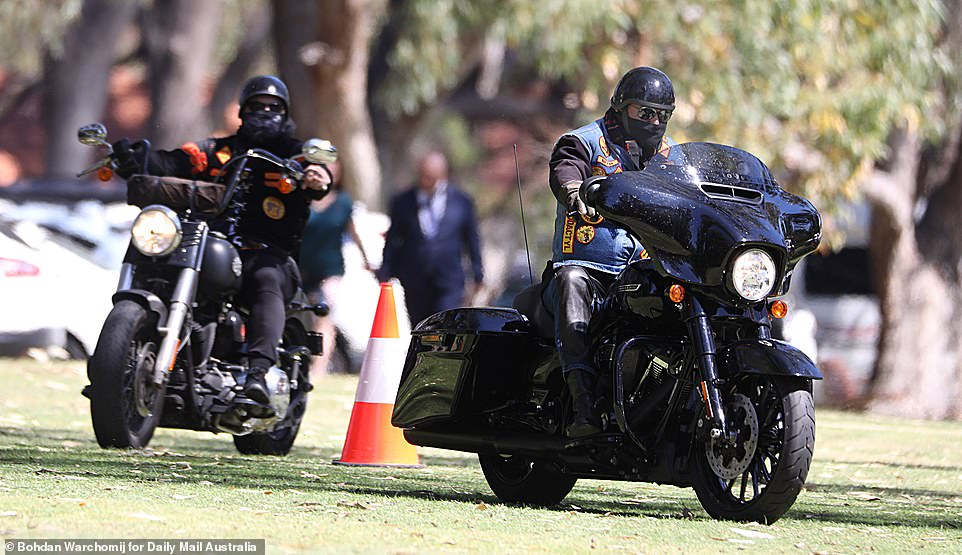 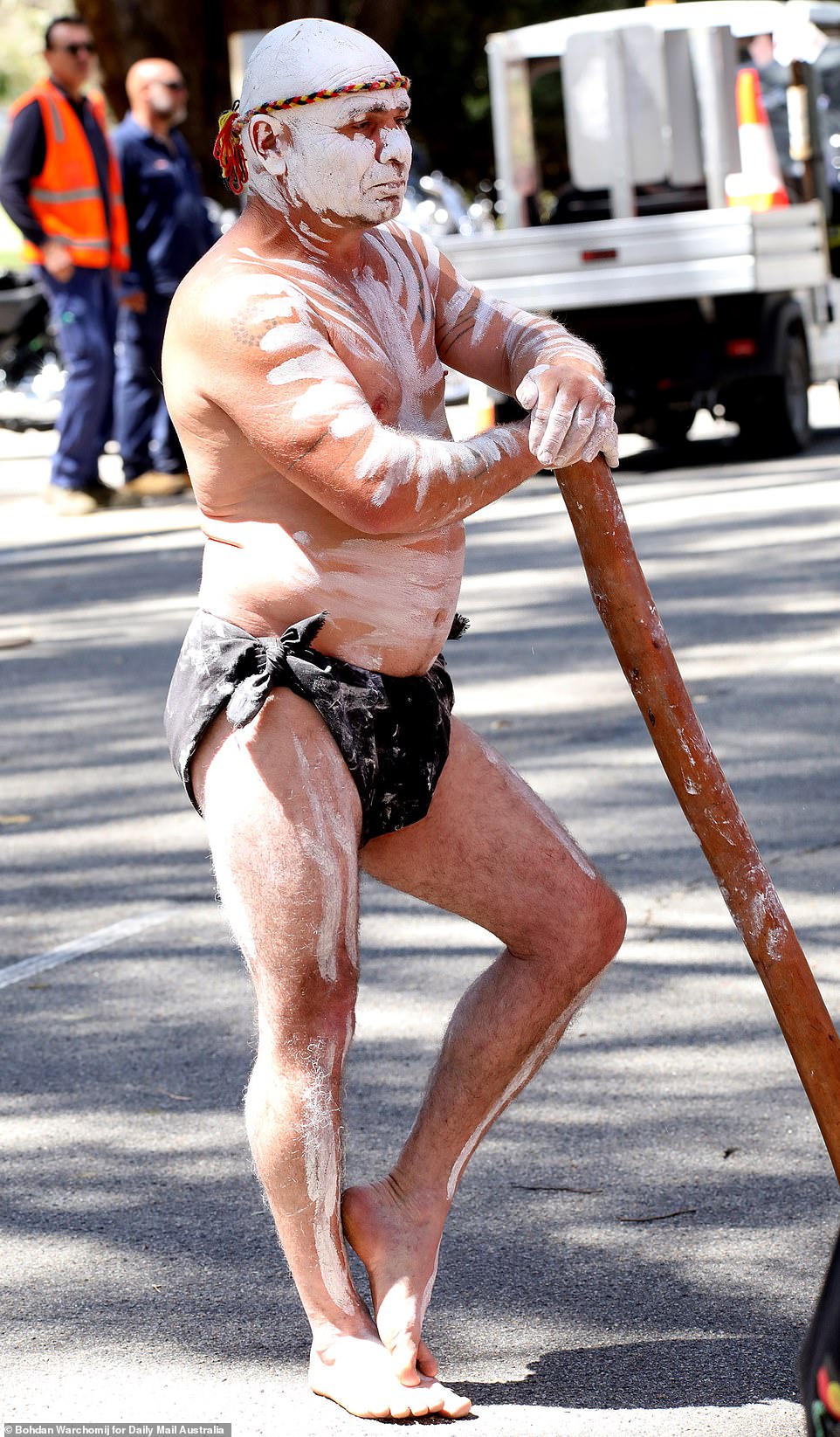 For those who were not able to travel to the service due to COVID-19 restrictions, a video link was set up and played for those not in attendance.

Among those who appeared on the video feed was Keith Hack – Barclay’s former head coach in the Lingerie Football League for the Chicago Bliss.

While most at the funeral wore black, some chose to wear more colourful clothing so as to banish the stigma around depression and suicide.

Although mourners put on a brave face at the ceremony, there was an outpouring of emotion and grief when Barclay’s coffin was carried away.

Among the six pallbearers, two were woman. 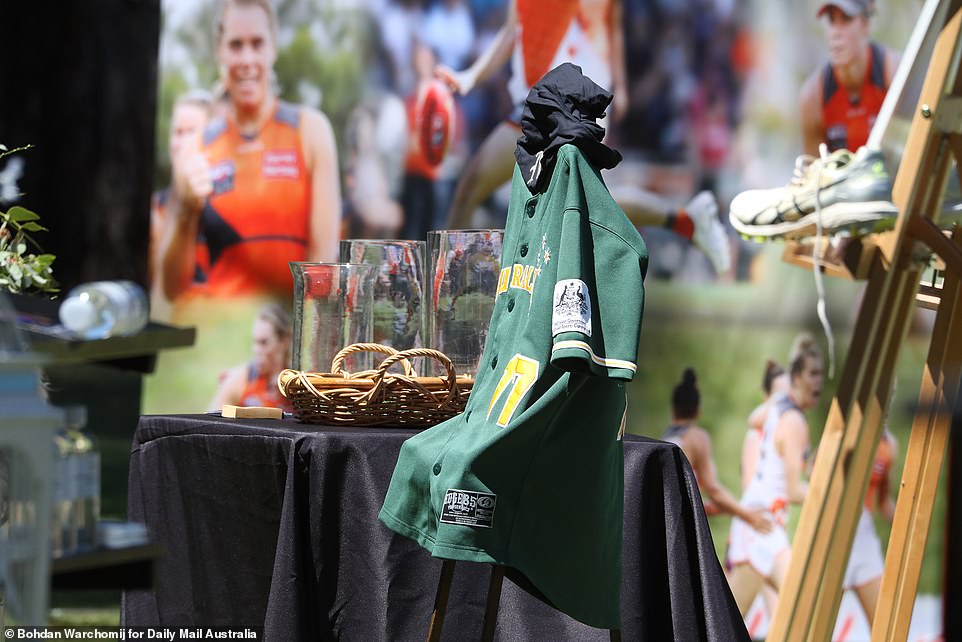 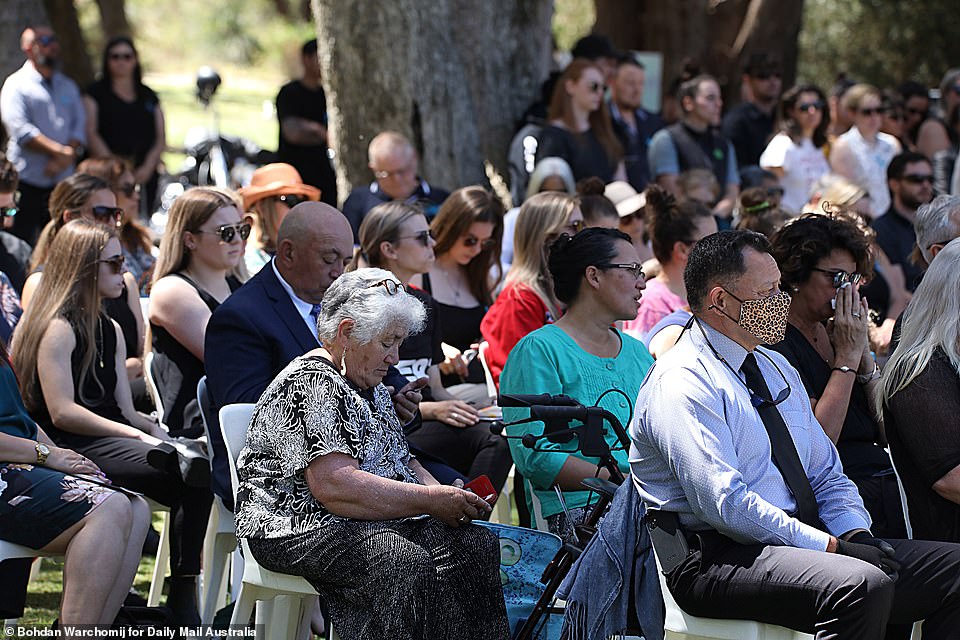 Despite the shock and emotional pain, heartbroken mourners (pictured) wanted to make the service a celebration of her life both on and off the field, rather than focusing on her sudden death 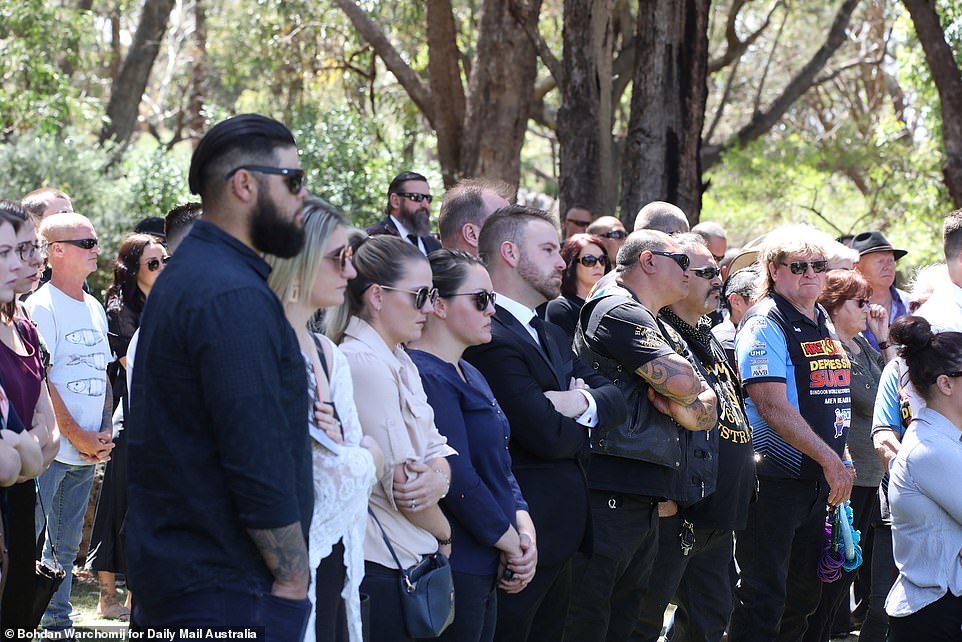 Sadness and sorrow: Mourners stand and look on at the funeral of Australian sports star Jacinda Barclay 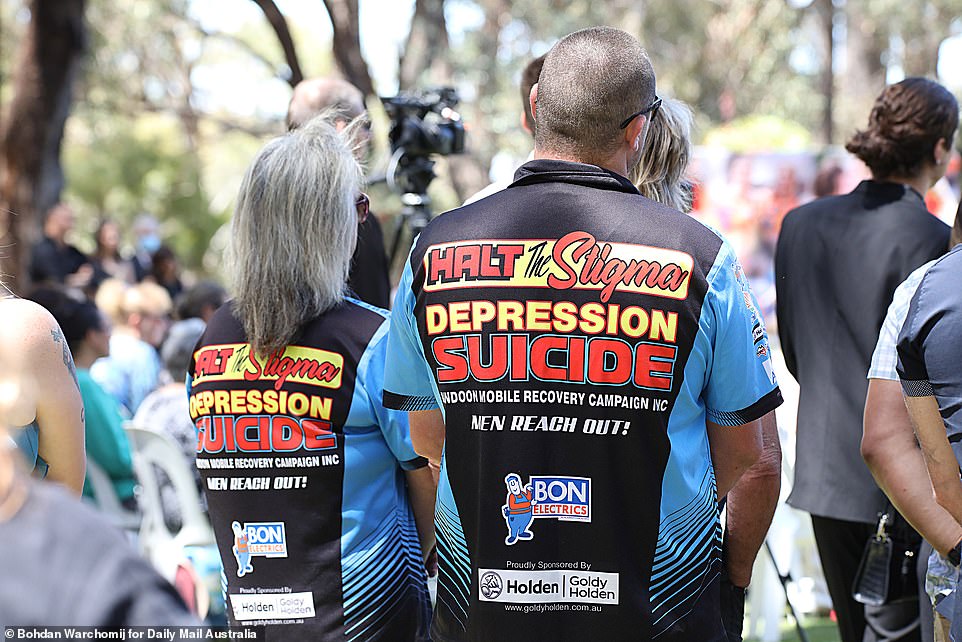 While most at the funeral wore black, some chose to wear more colourful clothing banish the stigma around depression and suicide 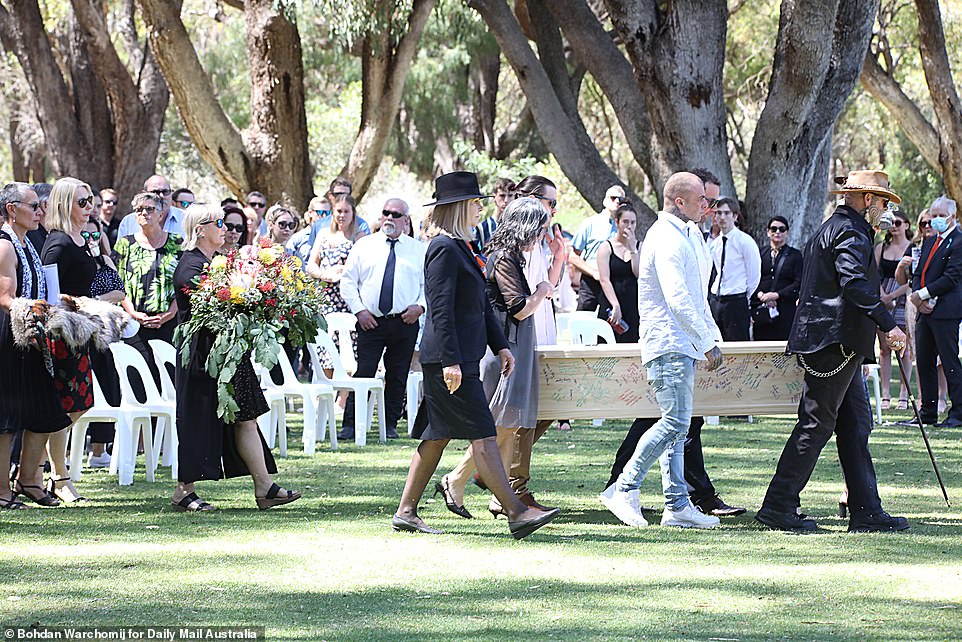 Many broke down in tears as the group made their way across the peaceful lakeside setting, eventually placing the coffin in the hearse.

Barclay’s sudden death took teammates and others working with her by surprise as she was ‘battling demons no one knew’.

The sportswoman’s parents opened up about their ‘beautiful and beloved’ daughter in a statement in the days following her death.

‘She was a shining comet that soared through this world casting her radiant light of love on all she met,’ a family statement read. 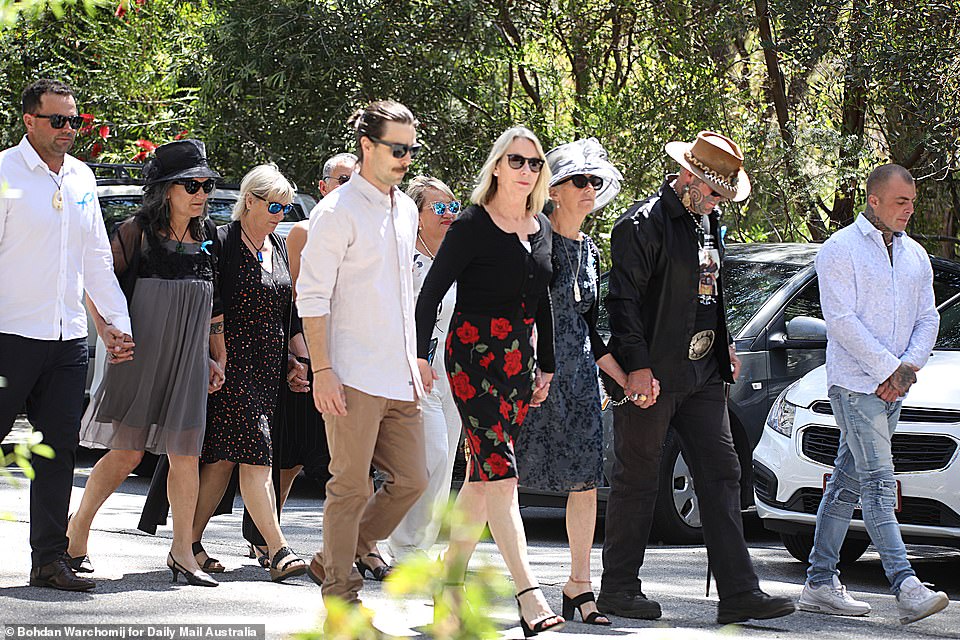 Although mourners put on a brave face for the ceremony, there was an outpouring of emotion and grief when Barclay’s coffin was carried away 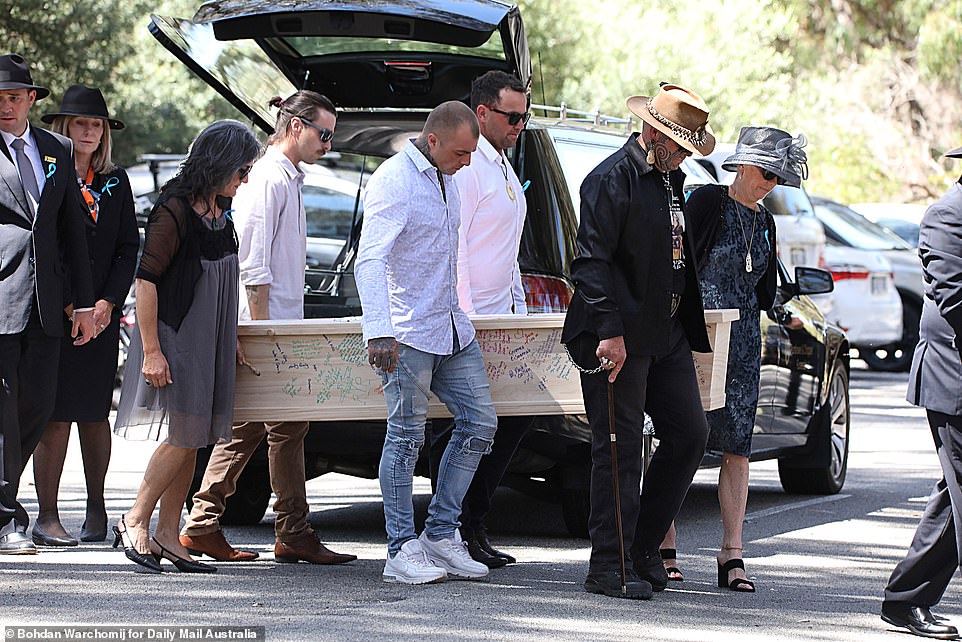 Messages of love and affection were written on Barclay’s coffin. Pictured are six pallbearers including two woman 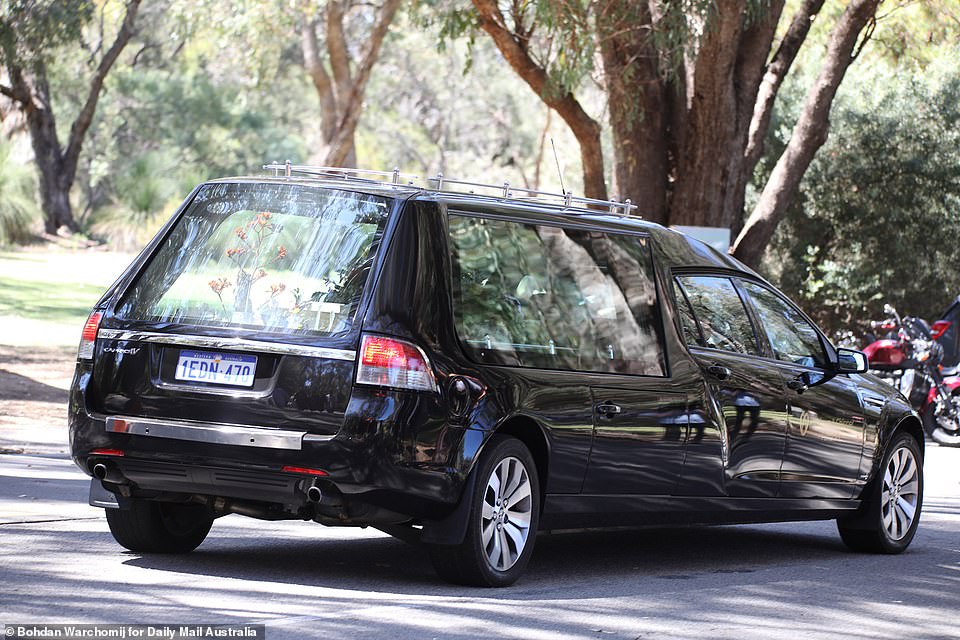 Many broke down in tears as the group made their way across the peaceful lakeside setting, eventually placing the coffin in the hearse (pictured) 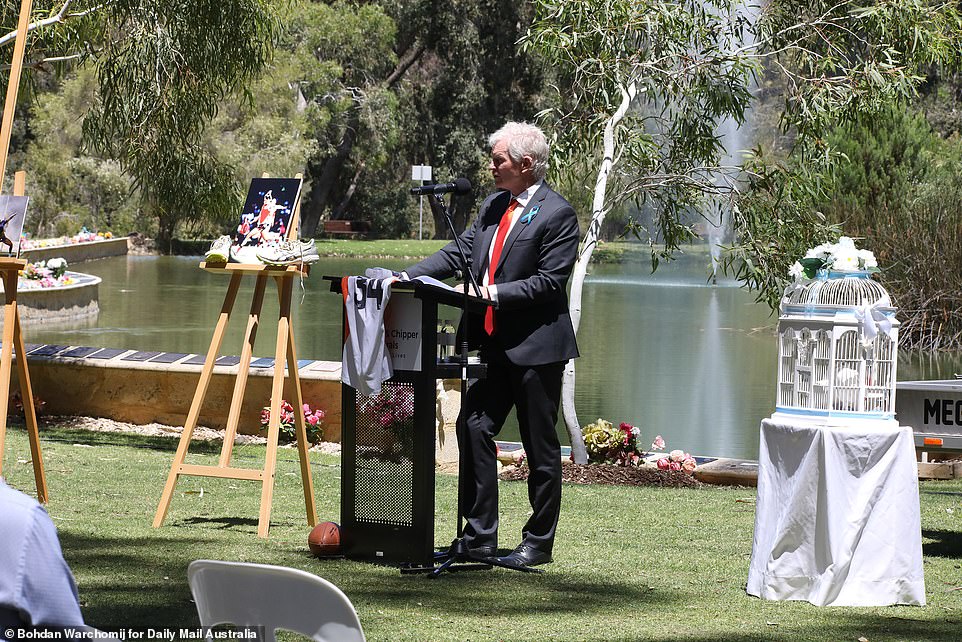 ‘Though that comet has now shattered into a million pieces, the memory of it will remain a beacon of light for all women in high profile sports to strive to excel, to dare to be great while staying humble and proud.’

Steph Mur, who played gridiron with Barclay at the Chicago Bliss, told Daily Mail Australia she hadn’t seen the Perth-born sports star since the 2016 season came to an end, but the pair kept in touch.

‘I have nothing but amazing things to say about her. You would never know she was struggling,’ she said.

‘Although I can’t speak on recent times, I can’t recall a single time that she was down in the dumps.

‘She spoke highly of everyone and was one of the most inclusive people I had ever met.’

Ms Mur said Barclay ‘lived a life that most people could only imagine’.

‘She was every coach and players’ dream- a fearless leader full of positivity, vast knowledge, eagerness to grow and dedication to every team member. More importantly, she was an all-round badass person,’ she said. 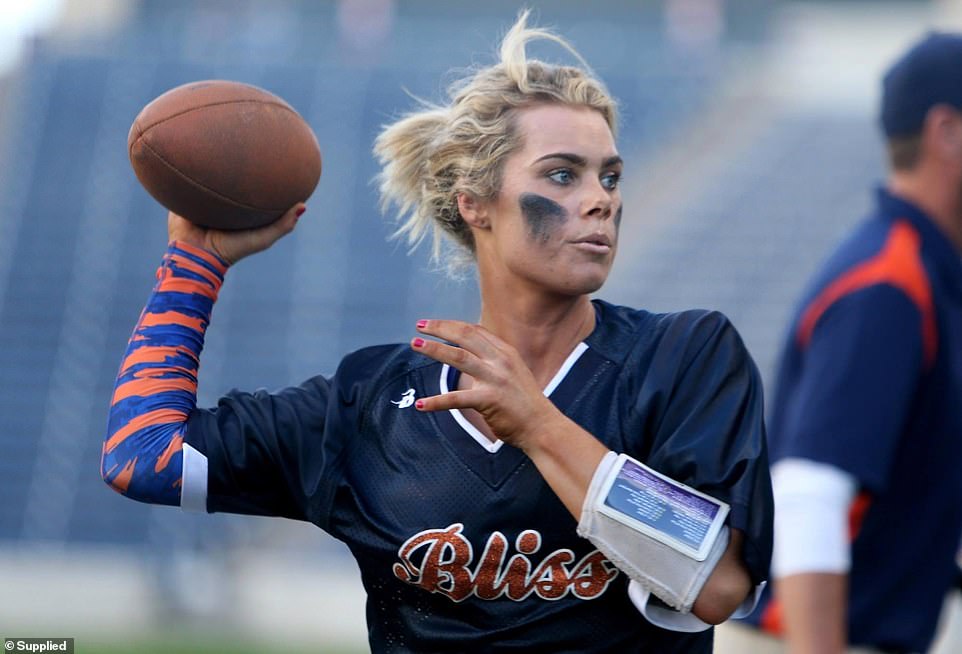 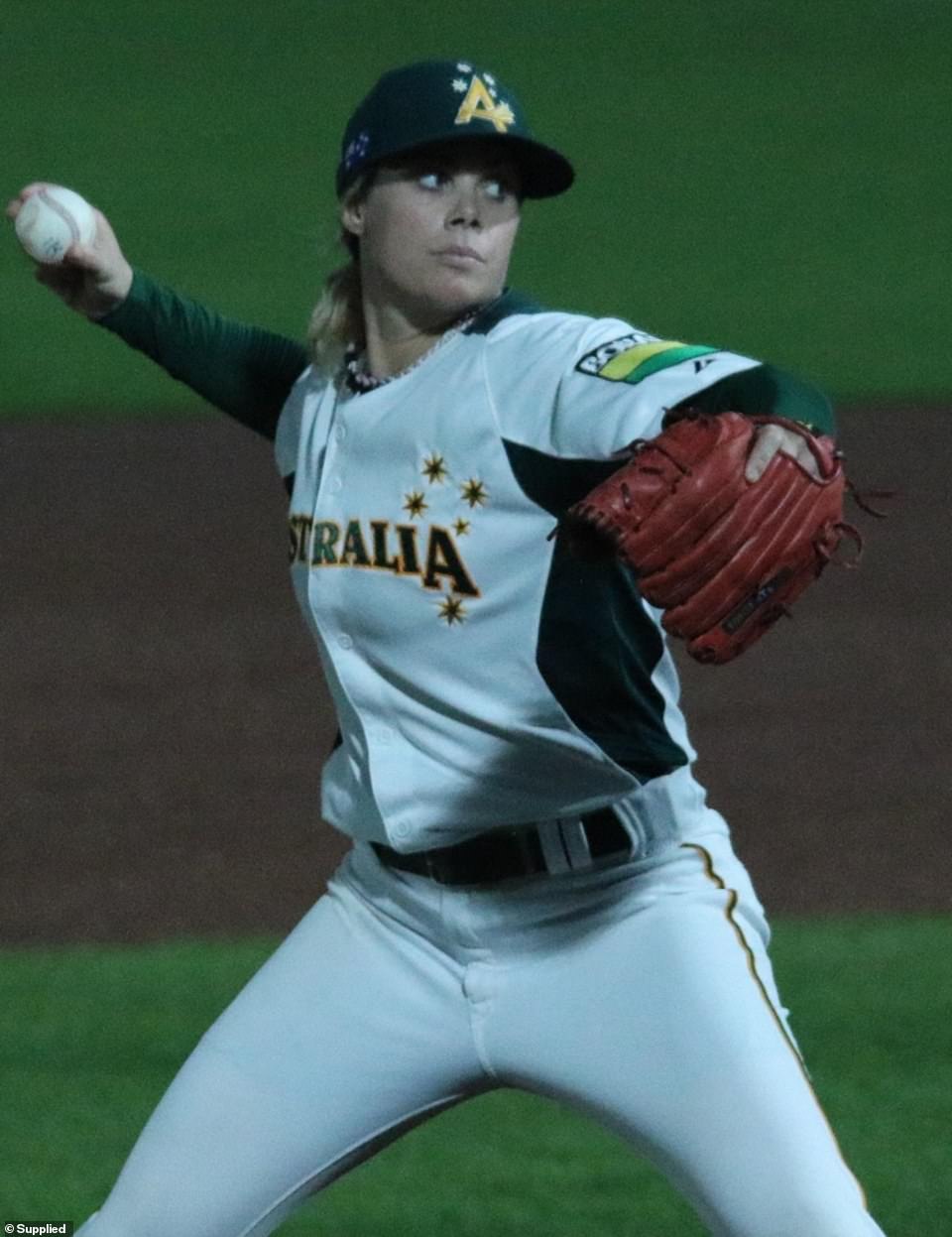 Barclay is pictured representing Australia in baseball. She was a right-arm pitcher with remarkable power 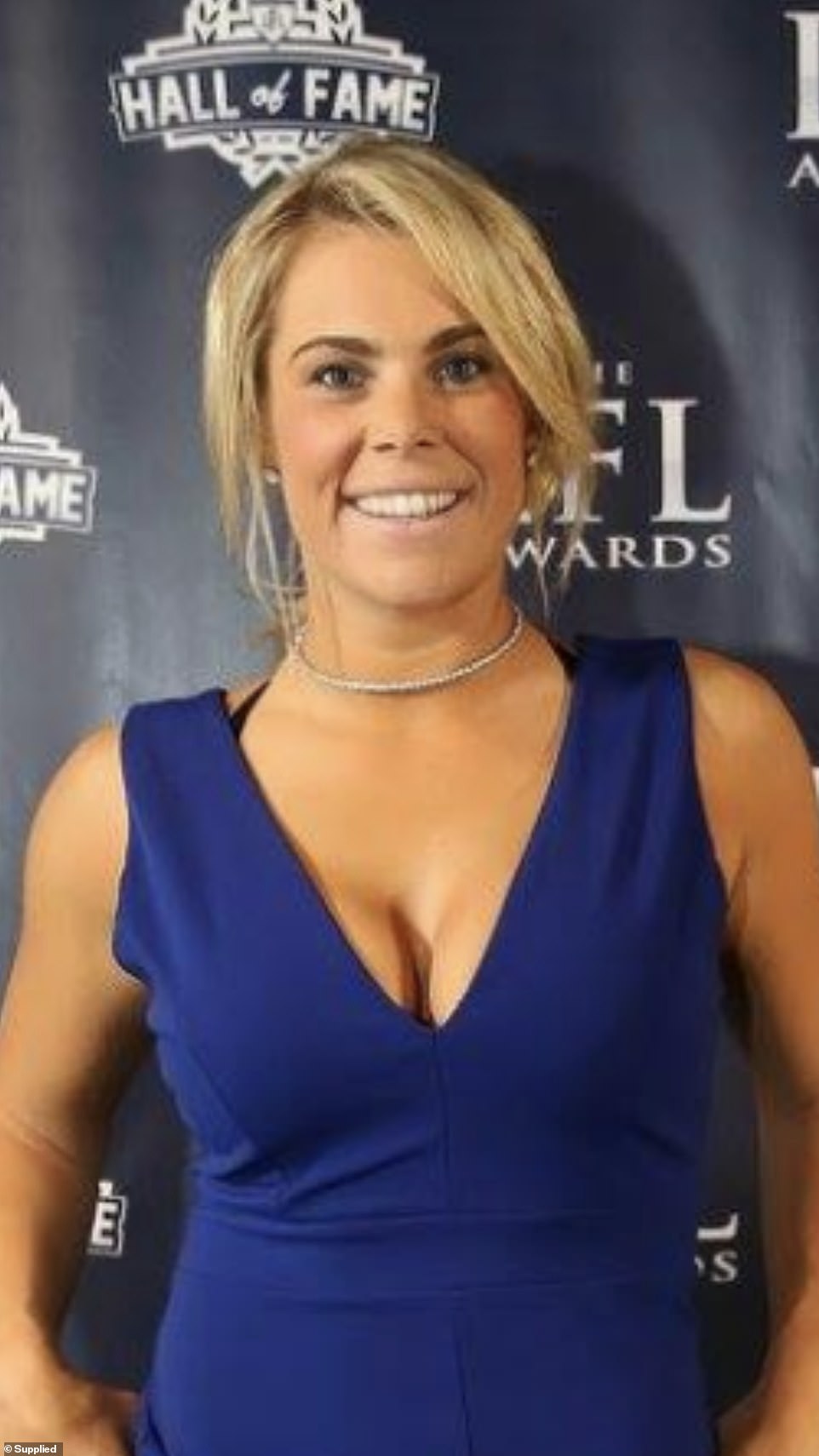 ‘She spoke highly of everyone and was one of the most inclusive people I had ever met,’ Steph Mur said of Barclay

Barclay’s friend Kayla Lee, who played alongside her in the Legends Football League, told Daily Mail Australia that Cinda – as she was affectionately known to her friends – had the ‘biggest and brightest personality’.

‘Cinda loved everyone. She was always happy, smiling and joking around. She was unique and didn’t care what others thought of her,’ Ms Lee said.

‘She was always encouraging others, while working hard on herself.’

Ms Lee said gridiron had lost ‘one of the most vibrant, positive and spirited souls on this planet’.

‘Cinda has been one of my closest friends since we met seven years ago training and playing in the LFL.

‘She was a naturally talented multi-sport athlete, who was driven, ambitious and a leader that was fighting demons none of us knew about.’

‘Life is short. Don’t hold grudges or waste time on the unimportant things. Take care of people, tell them you love them and live every day to the fullest. Rest Easy Cinda, you will be dearly missed.’

WA Police Force confirmed Barclay was found unresponsive at about 4.35pm on Monday, October 12, at a home in Chidlow – 45km east of Perth.

‘Police and St John Ambulance personnel attended the residence and upon arrival it was confirmed the 29-year-old woman was deceased,’ police said in a statement. 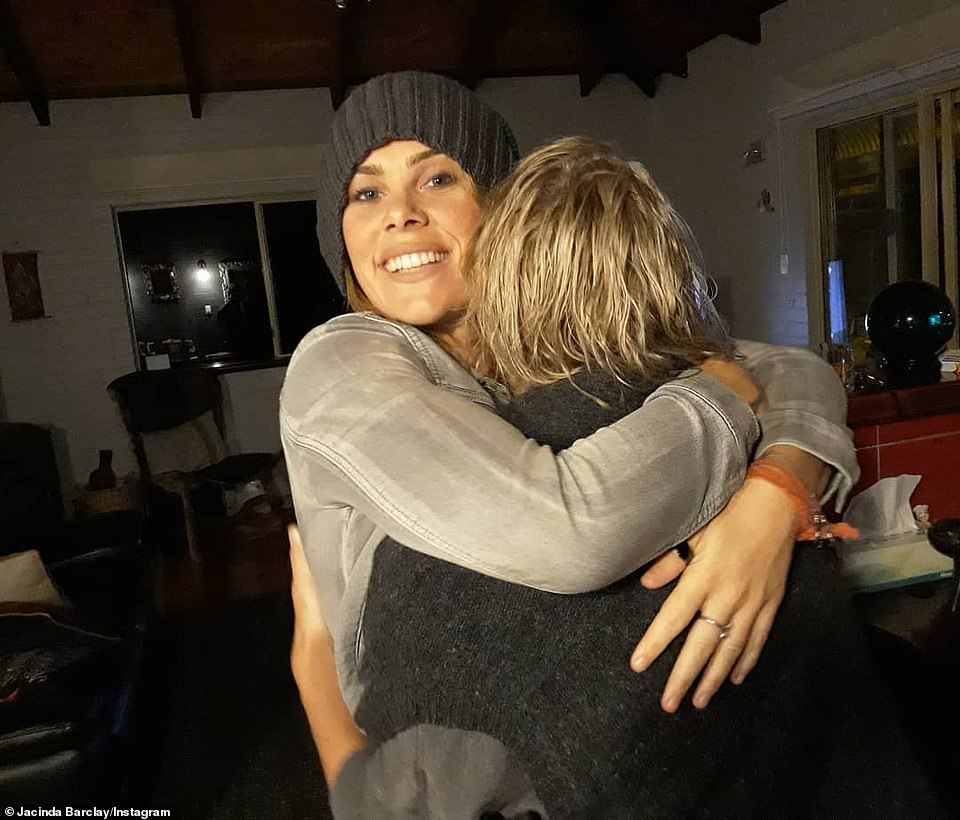 ‘She was a naturally talented multi-sport athlete, who was driven, ambitious and a leader that was fighting demons none of us knew about,’ Lee said about Barclay (pictured) 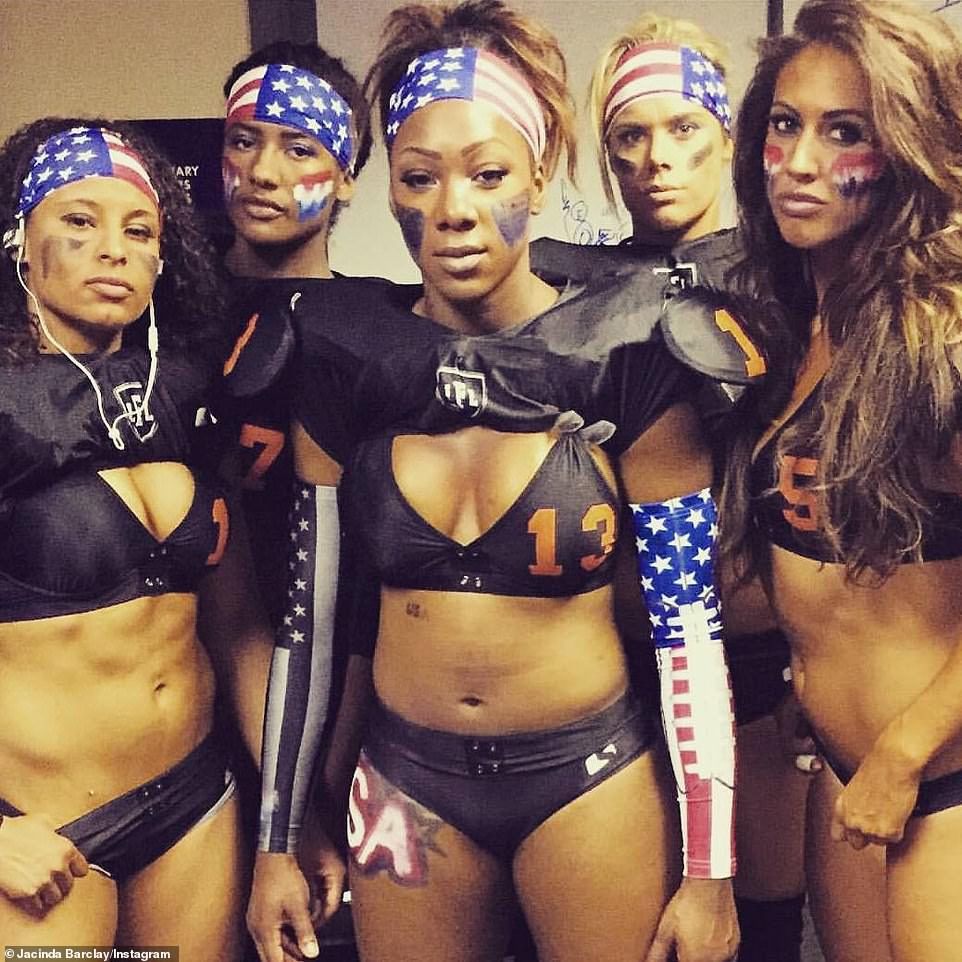 Barclay made her international baseball debut as a 17-year-old and won a silver medal at the 2010 World Cup before she played American football in Australia and the US between 2012 and 2016 and then turned her hand to AFLW.

The talented sportswoman joined the competition in the Giants’ first season in 2017, playing a total of 23 games and kicking 11 goals in four campaigns.

Barclay began playing Australian Rules football at the age of 12 but concentrated on baseball in her teenage years.

She made her state baseball debut at the age of 15 at the 2006 national championships, and the following year was included in the national squad for the first time.

Her American football career included spells with the NSW Surge for the inaugural 2013-14 season of LFL Australia and as a quarterback led them to a title in the competition’s lone campaign.

In 2016, Barclay was scouted by the Chicago Bliss for America’s Legends Football League and won a championship in her first season.

She returned to Australian Rules football when the AFLW began.

When she wasn’t competing on the field, Barclay worked as a technician on oil rigs, and as a ward clerk at a private hospital.

‘Any mature female athlete who wants to pursue sport has to juggle her career as well, so it’s nothing unusual for me, or that category,’ she told the AFLW website last year. 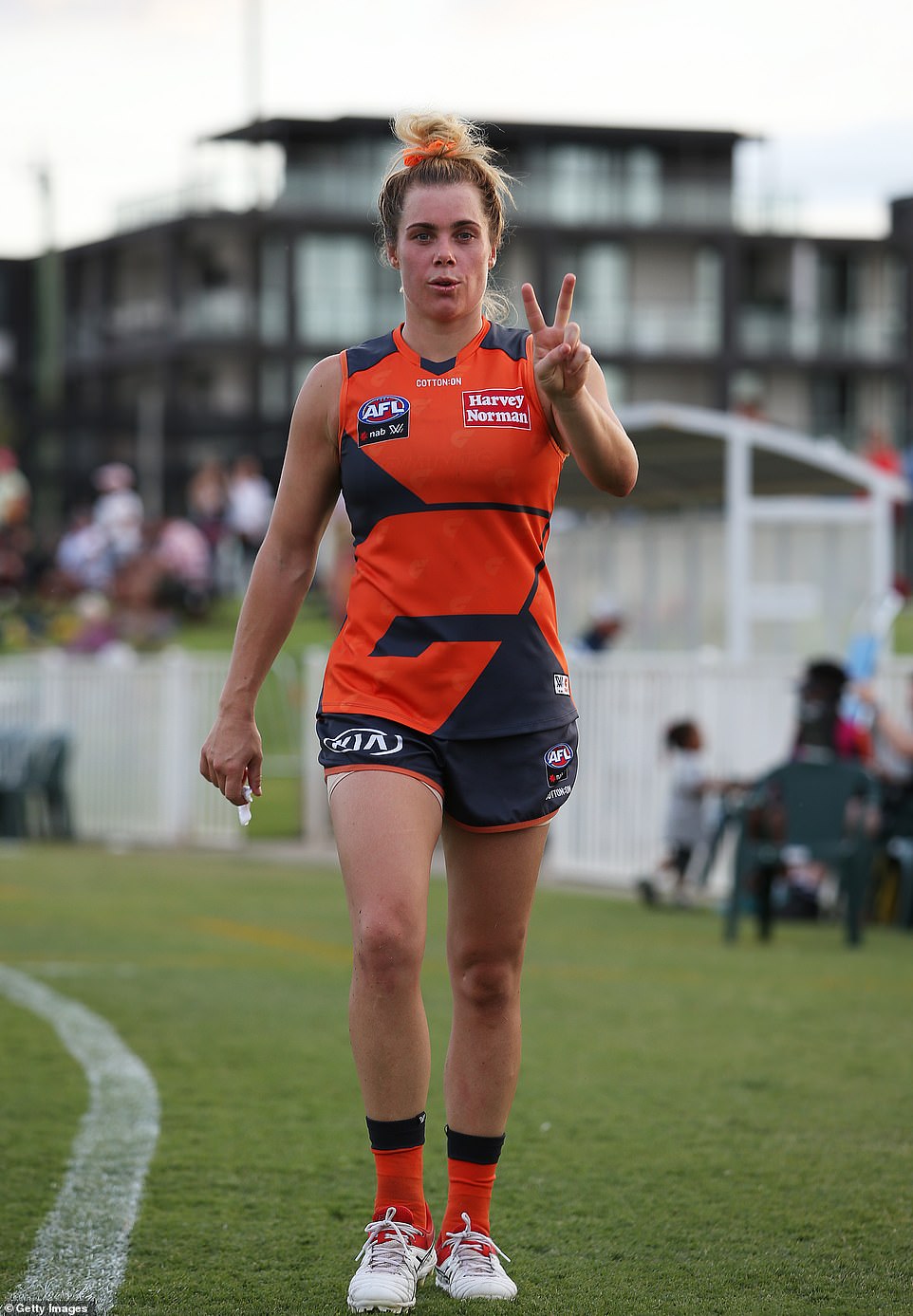 ‘Jacinda was a much-loved member of the Giants family and we are all devastated by her passing,’ Giants Chief Executive David Matthews said.

‘Jacinda gave up a great deal to follow her sporting dreams around the world and we are grateful that she called our club home for four years.

‘As an inaugural Giants AFLW player, Jacinda was a vital part of our club. More than that though, Jacinda’s spirit and infectious personality made her a popular and unforgettable member of the Giants family. She will always be a part of our club.’

AFL head of women’s football Nicole Livingstone said there are ‘few words’ to express her ‘sadness’ after learning about Barclay’s death.

‘Jacinda’s loss will be taken very hard by so many people within our game across all levels,’ she said.

‘On behalf of the AFL, I would like to express my deepest compassion to the Barclay family, friends and colleagues.’

Baseball Australia chief executive Cam Vale said Barclay made a ‘significant contribution’ to a number of sports both on and off the field. 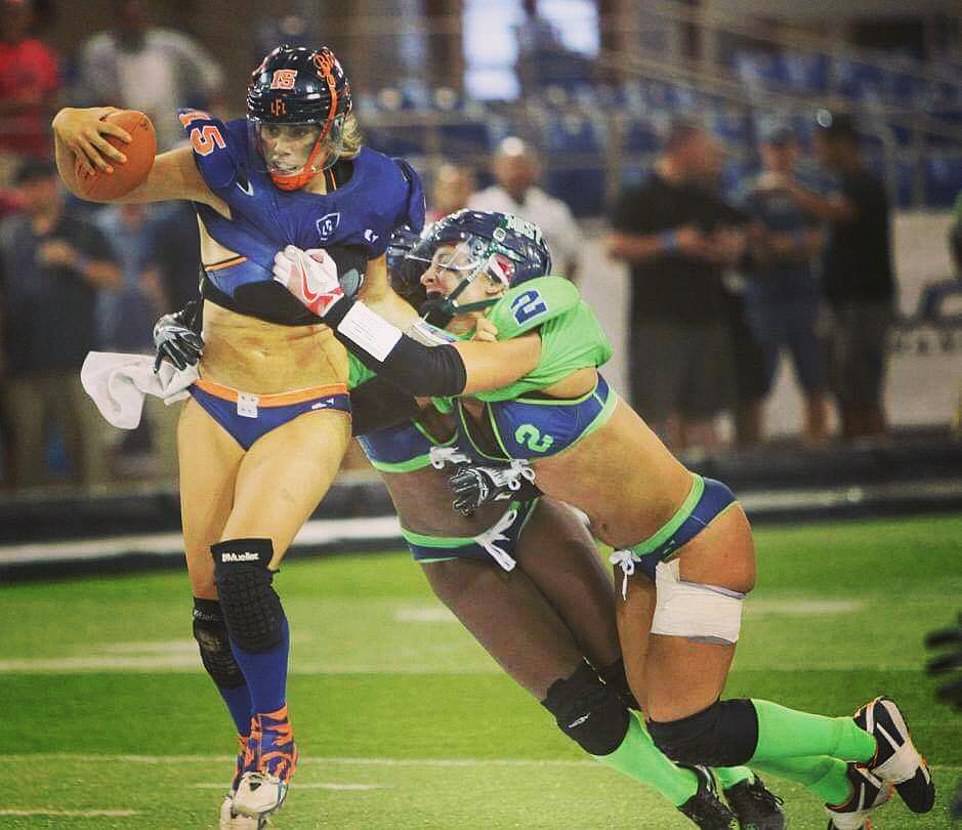 ‘We are deeply shocked and saddened by Jacinda’s passing and the loss of a member of our tight-knit baseball community,’ Mr Vale said.

The AFL also offered their condolences to family, friends and teammates of Barclay.

Former LFL teammate Deena Fagiano said her ‘goofy’ Australian friend would always be in her heart.

‘Devastated, my heart is Broken. The world has lost the brightest light, most badass athlete, and amazing friend,’ Fagiano wrote.

‘I am honored to have had you in my life and play along side you. Your energy was Infectious and I will always be inspired by your determination.

‘Your bravery to travel around the world to lead a team you had never met always continues to impress me and I will always have incredible respect for you.’