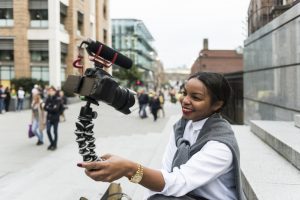 NBCUniversal is doing its part to help out historically Black colleges and universities. The entertainment and media company announced that it will be partnering with a number of educational institutions to launch the NBCU Academy.

The new program will offer training and development workshops for students plus a chance to work alongside established journalists from NBC News, and it will fund journalism scholarships.

The initiative represents a $6.5 million investment each to universities such as Clark Atlanta and Morgan State, and is a part of the parent company’s $100 million commitment to racial injustice and social change made earlier this year in response to the police shootings of unarmed Black civilians.

“Creating an inclusive culture for journalism that represents the communities we serve is at the very core of what we do,” said NBCU News Group Chairman Cesar Conde in the statement. “Through NBCU Academy, we have the opportunity to widen our extraordinary legacy by building on-ramps for a talented generation of journalists and storytellers who—for so long—may have been overlooked.”

The universities and colleges participating are:

“We appreciate the investment being made into Morgan State University,” said Dean for the School of Global Journalism and Communication at Morgan State, DeWayne Wickham, in a press statement.

“The NBCU Academy is a ‘put-your-money-where-your-mouth-is’ commitment to newsroom diversity. It is a partnership of substance that strengthens our faculty and enhances the ability of our students to enter the journalism profession heavily armed with the skills they need to succeed.”

“Words cannot express how appreciative we are to be selected to offer a world-class initiative such as NBCU Academy to our students at Clark Atlanta University,” said Dr. George T. French Jr., president of Clark Atlanta University in a written statement. “Such a partnership will support our vision to produce the best qualified, experienced, and globally competitive students to not only enter the journalism and communications industry but to excel in it.”