by blacksonrise
in Africa Business
0

Although the tax revenue for the current financial year is expected to be significantly lower than the estimates in the 2019 medium-term budget, Finance Minister Tito Mboweni has proposed no further changes in tax rates – except annual adjustments in personal income tax brackets, levies and excise duties in line with inflation.

Mboweni said the expected tax revenue is down by R10.7 billion but that the current economic climate makes it very difficult to burden citizens with further tax increases. This means those earning R460 000 per annum will get a tax relief of R3 400 a year. Those earning R265 000 will see their taxes reduced by just over R 1 500 per year.

Government’s total allocations for this financial year amount to R1.95 trillion and almost half of that will go towards social spending

However, the fuel levy and sin taxes have been increased significantly. The fuel levy will go up by 25 cents while smokers and drinkers will also pay more.

A pack of 20 cigarettes will now cost an extra 74 cents while spirits go up by R2 and 89 cents.

Consumers will pay more for sin tax. This consists of an increase in excise duties on alcohol and tobacco between 4.4% and 7.5%.

The government will also introduce new excise duty on sub heated and heated tobacco products, including e-cigarettes. This will be taxed at a rate of 75% of the cigarette excise rate with immediate effect.

There will also be an increase in the annual contribution limit to tax-free saving accounts by R3000 from 1 March this year.

Meanwhile, the South African Revenue Services (SARS) has welcomed the tax breaks in the latest budget. SARS Commissioner, Edward Kieswetter says he was not at all surprised by the announcement that there would be no major tax increases in 2020.

The Treasury says government will consult with industries affected by the introduction of export taxes on scrap metal. According to the Minister, the tax will improve the availability of better quality scrap in the country.

The government announced the policy last year with the aim to promote local scrap metal in the light of major job losses and de-industrialisation in the industry.

The proposed export taxes will apply to ferrous metals and aluminium.

Some scrap metal buyback centers are not happy with the decision. Tlou Mabotja buys and sells scrap metals.

“If they going to make hard for pp to buy, business is going to be slow. Already some products are low on price and costumers are complaining… prices fall further there will more complaining and they will not be able to feed the same number of ppl they use to feed.”

Below is the full 2020 budget speech: 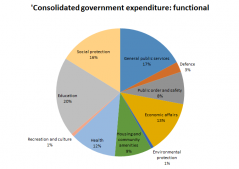 ‘Madame Vice President’ – So what do you know about her?

20 Indigenous-owned lady start up businesses to buy from.