Former senator and Olympic gold medallist Nova Peris has unleashed on the original designer of the Aboriginal flag in an unusual letter where she pretends to be the flag itself.

In a missive published to her personal Facebook page recently, Peris adopted the flag’s ‘persona’ to tell its story and appears to attack its original designer and copyright holder Harold Thomas.

The letter – signed ‘Yours Truly, The Aboriginal Flag’ – tells the iconic red, yellow and black banner’s story from ‘birth’ to the present, with the ‘flag’ apparently claiming it must be removed from copyright holder Mr Thomas, of Alice Springs.

‘I need urgent help to get away,’ Peris wrote, in the voice of the flag.

‘I belong to the people who adopted me, the people and community who loved me and raised me and made me who I am today.’ 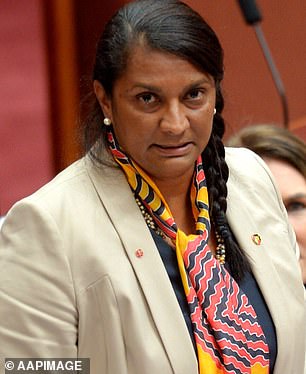 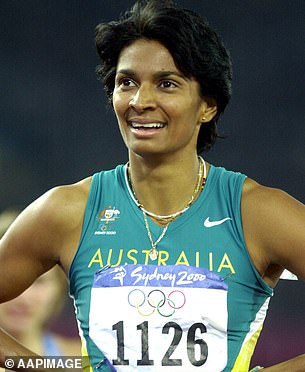 Peris (left, in the Senate) has called for the Federal government to obtain the rights to the flag by compulsory acquisition, after the company who owns its clothing rights ordered businesses using the flag to desist. The one-time athlete is a keen advocate of the Free The Flag campaign 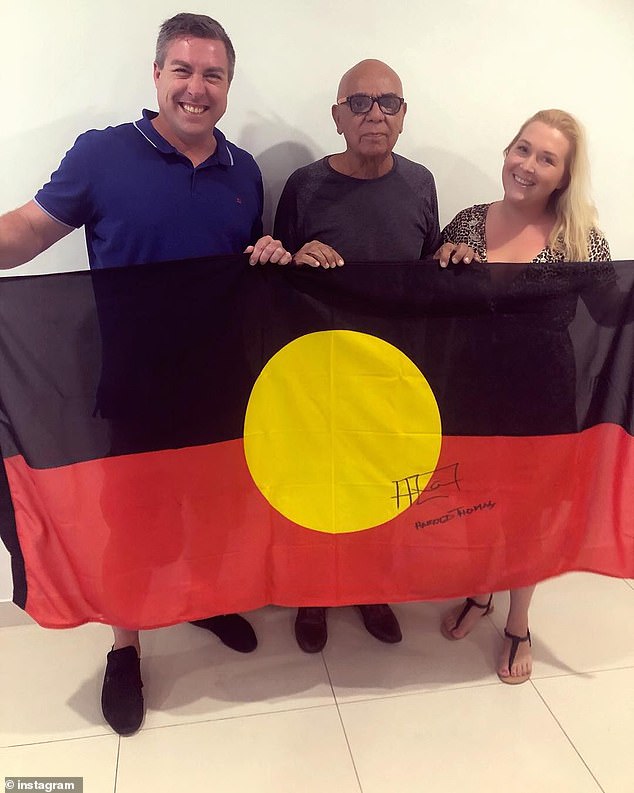 Peris is an outspoken advocate of ‘freeing the flag’ from an arrangement where Mr Thomas has granted WAM Clothing the exclusive rights to display the flag on clothing and in media, in return for royalties.

Mr Thomas designed the flag in 1971 for use for a National Aborigines Day March in Adelaide.

It went on to be designated as an ‘official flag of Australia’ in 1995 and became a cultural symbol hoisted by the likes of Sydney Olympic gold medallist Cathy Freeman and draped in school halls.

In 2018, Mr Thomas signed an exclusive deal with WAM – owned by white businesspeople Semele Moore and Ben Wooster – for the commercial clothing and media rights to the flag.

‘I felt so much love… Sadly, of late things have taken a turn for the worst’.

The Aboriginal flag, from the perspective of Nova Peris

WAM has since ignited controversy by aggressively enforcing its rights, sending ‘cease and desist’ notices to the AFL, NRL and other, smaller organisations that have produced clothing with the insignia without asking permission.

The resulting furore has pushed Indigenous Affairs Minister Ken Wyatt into talks with Mr Thomas and WAM for the Government to buy the rights to the flag.

‘I commit to doing everything I can to bring about a resolution that respects not only the artist of the flag, but a resolution respects the rights, enterprise and opportunity of all Australians,’ Mr Wyatt said.

However, Peris has written a submission to a parliamentary inquiry urging the government to compulsory acquire the rights as a ‘matter of national emergency’, where it would not pay out the licence.

In her letter, Peris – in the first-person voice of the flag – wrote that after it was ‘born’ 49 years ago it was taken ‘far away, to a place where people saw me, they immediately fell in love with me.’

She spoke of how the flag was embraced by the Indigenous community.

‘I was nurtured by a community that grew and grew. I felt so much love. All people wanted to do was show me off.

‘When people saw me there was something in me that they saw i themselves. It was strength, resistance, it was pride, it was survival.’

Peris went on: ‘I had lived the most incredible life for some 47 years.

‘I was so humbled that people chose to have me tattooed on their bodies and have my image buried with their loved ones. 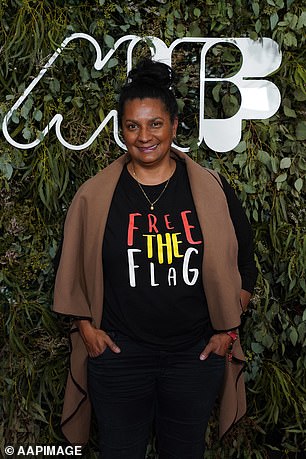 Peris, who won Olympic gold in hockey in 1996, is above in a ‘Free the Flag’ shirt. A Change.org petition calling for the license agreement to be changed has garnered almost 150,000 signatures

‘But sadly, of late things have taken a turn for the worst’.

She goes on to accuse Mr Thomas of treating the flag with ‘contempt’.

In an apparent reference to the WAM Clothing, she wrote: ‘He had effectively given me away ‘legally’ from those that loved me and raised me, to these people who are now forcing me to work just to please these people … I need urgent help to get away.’

Peris she wrote the letter to ‘help people understand the story of the Aboriginal flag.’

Afterwards, Peris went on to instruct any friends of hers who supported Mr Thomas to ‘remove yourself immediately off my (Facebook) page.’  Peris also used an expletive to describe his attitude to the flag.

In an interview with Indigenous radio station CAAMA last September, Mr Thomas described how he had been ‘slandered’ by critics, arguing he has the right to make agreements with a non-Aboriginal company under the Copyright Act.

‘The first lie that has been told is that I sold the Aboriginal flag – that’s an outright lie,’ he said.

Mr Thomas issued a statement in 2018 saying that he selected WAM Clothing as the company ‘respects and honours the Aboriginal flag and copyright’.

Comment was sought from Mr Thomas but a representative said he isn’t weighing in on the debate over the flag. Daily Mail Australia likewise approached Peris for comment.

Employment of spouses and dependents, health and education in Papua New Guinea

The White Supremacist And Extremist Donors To Trump’s 2020 Campaign

‘Focus on what you can control’: showing leadership during Papua New Guinea’s pandemic

UWI study under way to record coronavirus types in TT