In the midst of this historic election year, Black Americans are facing the compounding crises of a global pandemic, police brutality, record-high unemployment, and targeted voter suppression.

To unpack this pivotal moment, BLACK ENTERPRISE partnered with Be Heard Talk, an award-winning talk show that adds a taste of hip hop, Assata Shakur, and spice to unseasoned news. Each Sunday, the Be Heard Talk team — Selena Hill, Digital Editor at BLACK ENTERPRISE; Stanley Fritz, the New York State Political and Campaigns Director at Citizen Action of New York; and Tammie David, a community organizer – will hold live conversations with elected officials, organizers, political leaders, and surrogates from the Biden campaign about this era-defining election. 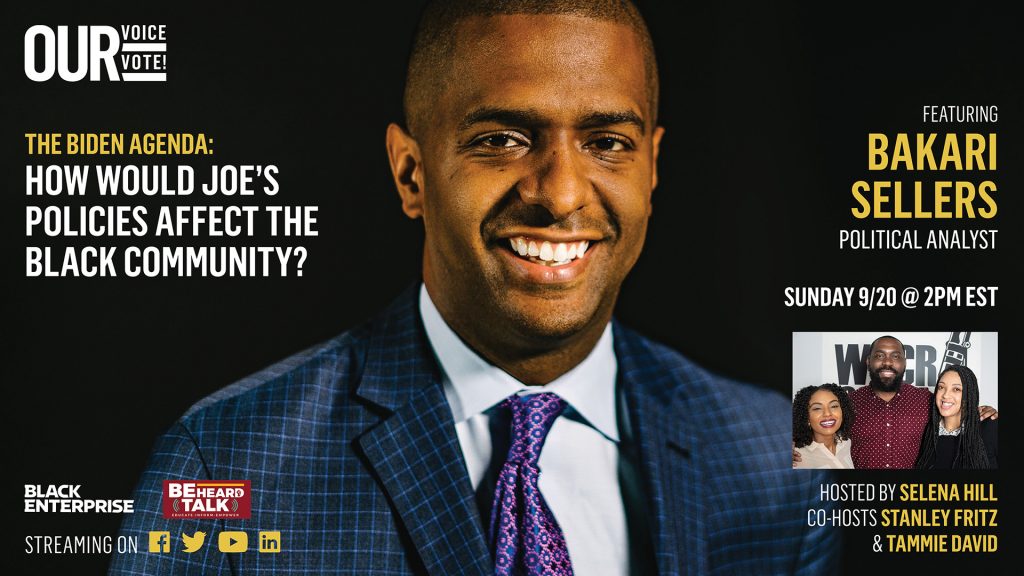 This week, CNN political analysts, best-selling author, and attorney Bakari Sellers will join the team to discuss the impact that Joe Biden’s policies and politics will specifically have on people of color. The series, which is part of BLACK ENTERPRISE’s “Our Voice Our Vote” 2020 election coverage, kicked off on September 13 with LaTosha Brown, the co-founder of the Black Voters Matter Fund. During her appearance, she stressed the importance and the power of the Black vote.

Sellers made history in 2006 when he was elected to the South Carolina House of Representatives at the age of 22. This made him the youngest African American to win a public office at the time. After eight years in office, he ran for Lieutenant Governor of South Carolina in 2014 and lost. In 2018, he released the documentary While I Breathe, I Hope that chronicles his losing bid for lieutenant governor.

In May the Morehouse graduate published the memoir My Vanishing Country at the age of 35.

Watch Bakari Sellers’ live interview on “Be Heard Talk” this Sunday, September 20 starting at 2 p.m. EST by registering here. You can also view and leave comments during the live show via Black Enterprise’s Facebook, Twitter, LinkedIn, or YouTube page.