Outback schoolboy Dylan Storer has been praised on social media after slamming ‘narrow-minded’ politicians while weighing in on Australia’s bushfire crisis.

The 16-year-old reappeared on ABC’s Q&A Monday night, where he was asked how he would tackle the country’s environmental emergencies if he were prime minister.

The teen, who was praised for his first appearance on the panel program last year, argued that problem wasn’t an ‘ideological’ one.

‘It’s not political opinion to say climate change hasn’t contributed to these horrific bushfires in NSW and Queensland,’ he began.

‘This isn’t a political idea that has come out of nowhere, this is the Bureau of Meteorology… who else are we supposed to believe?

‘It is a huge issue and I think we need to actually have a government that first, acknowledges it, that doesn’t have senators in the back thinking that the Bureau is tampering with temperature data – it’s ridiculous.’

Dylan Storer appeared on ABC’s Q&A Monday night, where he was asked how he would tackle the country’s environmental emergencies if he were prime minister

‘We’ve got to a huge coastline, we’ve got so many opportunities here, but narrow-minded people in Canberra, and from particular sections of the media and some commentators, it really restricts what we can see, and it’s become really ideological when it shouldn’t be because it’s life on earth.’

Storer’s response was met with huge applause from the audience before he was asked if Australians should be allowed to debate climate change while bushfires are claiming people’s lives and homes.

‘You do need to be sensitive about it but you can’t put your head in the sand and pretend it doesn’t happen…and talk about it when these bushfires are finished, because bushfire season hasn’t even started.

Storer’s responses had him trending on Twitter, with many calling for him to be the next Prime Minister and even comparing him to the late Bob Hawke

‘More bushfires are going to start, more people’s lives are going to be lost unfortunately, there’s going to be a huge refugee crisis due to climate change and you know we’ve got a government and our missions are continuing to rise, it’s kinda disgusting.’

Storer’s responses had him trending on Twitter, with many calling for him to be the next Prime Minister and even comparing him to the late Bob Hawke.

‘Hardy to deny that with at least an interest in addressing/discussing issues that young Dylan Storer wouldn’t make a great leader for Australia. Perhaps another Bob Hawke,’ one person tweeted.

Another said: ‘Dylan Storer is a superb example of the number of thoughtful, positive and articulate young people there are in Australia.’ 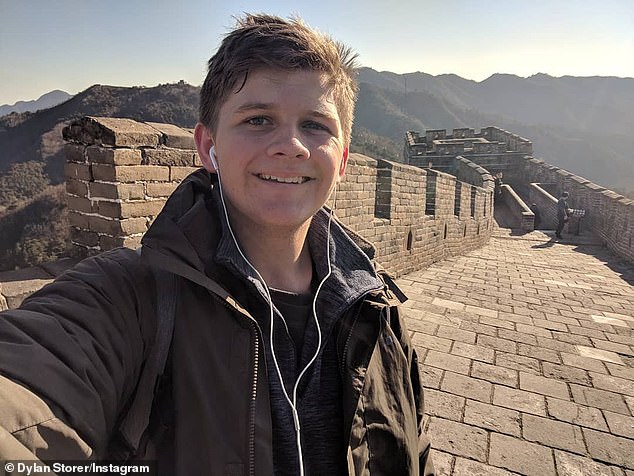 ‘Dylan Storer crushing it on Q&A once again tonight – compassionate, articulate, with great insight and perspective…he restores my faith in young people,’ tweeted another.

Storer went on to address the current state of politics in the country, while calling for politicians to be more ‘honest’.

‘I think – to politicians on the panel and to people watching as well – just be genuine, be honest to people, people will respect that.

‘You might not win the news poll of the day but overall people are going to respect your authenticity. All Australians from across the political spectrum love Bob Hawke, and I think that’s because he showed a level of authenticity, Australia liked that.

‘I’ve been fortunate enough to meet a few politicians, from all side of politics and they’re genuinely nice people, but I think the face that gets put on in public sometimes can leave people feeling jaded and I don’t think that’s good for democracy.’

Storer, who is from WA’s Kimberley region, rose to fame last year when he appeared on the panel for the first time to discuss indigenous affairs.

The then 15-year-old stunned host Tony Jones with his eloquent response, leaving him to ask how old he was. 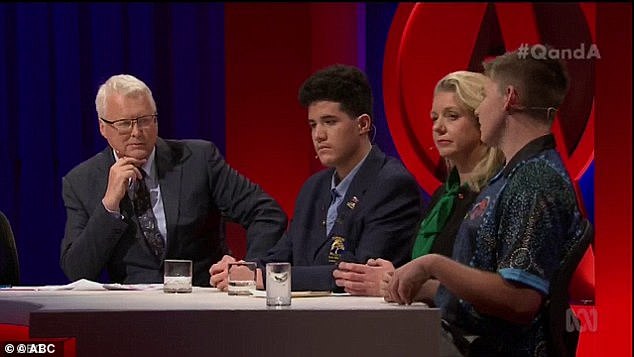 Storer, who is from WA’s Kimberley region, rose to fame last year (pictured) when he appeared on the panel for the first time to discuss indigenous affairs

Storer argued that Aboriginal Australian history should be mandatory in high schools, reflecting on his experience in the small and majority indigenous community where he grew up.

He also weighed in on Tony Abbott’s role as the ambassador for indigenous affairs, implemented by Prime Minister Scott Morrison.

‘You need to look at the underlying issues, they all really relate back to the way Australia was settled, colonised, invaded,’ he said.

‘This top-down approach of the government coming in and saying we’re going to appoint, of all people, Tony Abbott, to deal with indigenous attendance, I think it’s really counter-intuitive.’

The audience erupting into applause and left Jones asking the boy to remind him how old he really was, to which Storer replied: ‘I’m 15.’