Rio tribute to Yemanja, Afro-Brazilian queen of the sea – WeirdNews 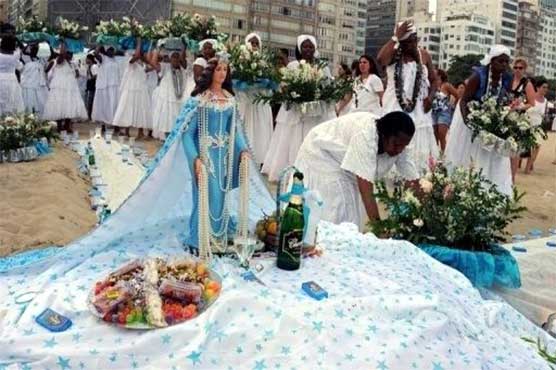 Every year followers of the Candomble and Umbanda religions dress in white to celebrate Yemanja.

Every year followers of the Candomble and Umbanda religions dress in white to celebrate Yemanja by singing and dancing around her statue set up on the beach.

Yemanja’s devotees offer flowers, letters, alcoholic beverages and beauty products as gifts for the sea goddess, who they believe will bless them in return.

Locals gathered on Copacabana to present their offerings to the Afro-Brazilian queen by placing them in the sea where they are sent out from the country’s Atlantic shore as part of the event.

Yemanja is one of the deities of the Yoruba religion and has become prominent among Afro-American cultures. The tradition was brought over to Brazil by African slaves hundreds of years ago.