It was no surprise the Sussexes’ sudden decision to retreat from royalty and quit the kingdom fired up the hyperactive British media – especially as they cited press pestering as a major reason. But half a world away, ours were in a frenzy over it too.   ​ 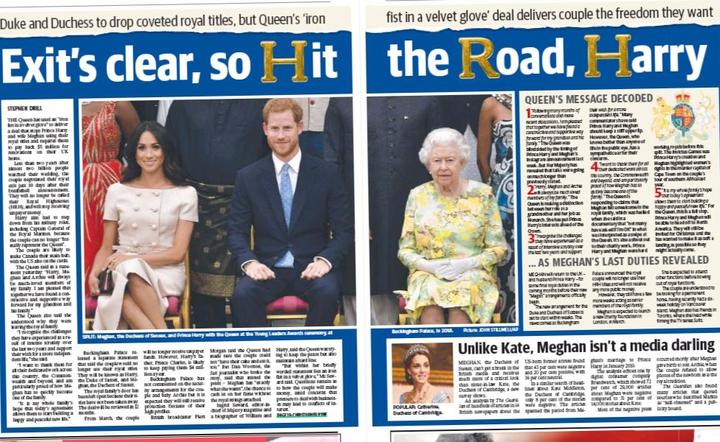 When Iranian military commander Qasem Soleimani was killed by a US drone strike four days into the new year, it peaked fears of a war with Iran and alarmed the US’s allies.

But it was a ‘war’ breaking out in the UK that pre-occupied the media there – and here – sparked by the announcement Meghan Markle and Prince Harry wanted out of the Royal family  – and their kingdom too.

“It’s War of the Windsors,” Newshub at 6 host Tom McRae said the night the news broke.

That report came from a New Zealand reporter Dan Wootton – now an executive editor at Rupert Murdoch’s top tabloid The Sun, and formerly a showbiz writer at Murdoch’s paper News of the World (which was closed after the phone hacking scandal in 2011).

His Sun scoop quoted an unnamed “senior source” as saying: “This is a declaration of war on the family.”

“There is absolutely a civil war over this decision and its been going on for some time,” Dan Wootton told TVNZ News at Wellington airport.

Dan Wootton reported the couple rushed out their statement because The Sun was going to break the story – but he said they played fair by giving them 10 days’ notice.

He told UK media trade journal Press Gazette the royal couple were “professional victims” who “wanted to feel like they are under attack from the British press and a lot of the time they actually haven’t been”. 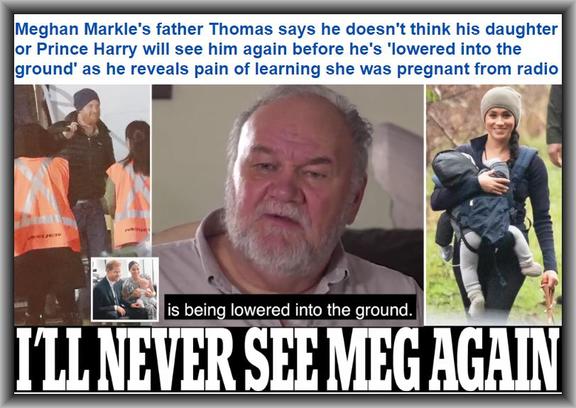 The Mail Online’s lead story last Wednesday. (Can you get pregnant from a radio . . . ?)
Photo: screenshot

This was a point he also hammered home in a British ITV documentary rushed on air by TVNZ last Wednesday.

“I stand by everything The Sun has done. They are a public couple, partly funded by us and they deserve proper scrutiny,” Dan Wootton insisted.

It there’s one thing not in short supply in the media lately, it’s scrutiny of that couple.

Dan Wootton had much more sympathy for the couple – and Meghan Markle in particular – when he appeared on TV3 during another trip home in 2018, but he’s far from the only one in the UK media to turn on them in recent times – Meghan Markle especially. 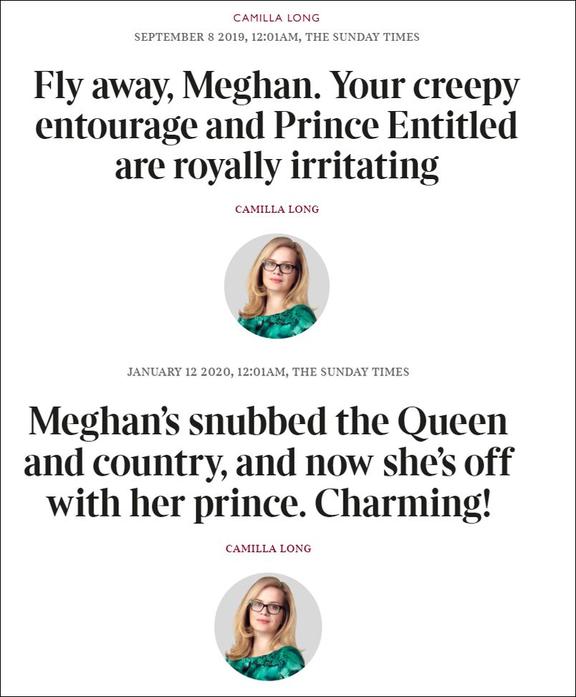 In the UK’s Sunday Times (another Murdoch paper) last September, journalist Camilla Long said it was “time for Meghan to leave and take Prince Pussywhipped with her”.

The headline on her column last week was: “Meghan’s snubbed the Queen and country, and now she’s off with her prince. Charming!”

As Vice UK reporter Paulie Doyle pointed out, her entire article could be summed up in just one line: ‘How dare you leave . . . as I repeatedly told you to?’

“They said they had come to this decision ‘over the last few years’. But Meghan’s only been here three seconds. She only met him a minute ago! The joyful gushing wedding was yesterday!,” Camilla Long whined in the paper last week.

(That’s pretty poor writing. No-one could marry someone yesterday whom they met only a minute ago, having arrived a mere three seconds earlier.)

Camilla Long was echoed here by Kate Hawkesby who has written and broadcast plenty of condemnations of Meghan Markle in the Herald and Newstalk ZB in recent months.

“As much as I’d love to come on here first day back and NOT say ‘I told you so… I have to say, I said at the time that I didn’t trust Meghan Markle,” she told her ZB listeners last Monday.

“She was certainly no Kate Middleton 2.0,” she added, echoing critics in the UK comparing Meghan Markle unfavourably with the Duchess of Cambridge.

On Scoop.co.nz, Gordon Campbell pointed out Buzzfeed had found more than 20 examples of Kate Middleton being lavishly praised by the press while the Meghan Markle was denigrated for exactly the same things – including eating avocados and visiting the Queen.

While critics have claimed this was motivated by snobbery and even racism (Meghan Markle has African-American heritage) The Sun said in an editorial it was “sick of woke morons crying racism over press criticism”.

Here, Stuff published a piece from the Philadelphia Daily News by an Ohio attorney called Christine M Flowers headlined: I don’t like Meghan Markle. That doesn’t make me racist.

In that ITV doco on TVNZ 1 last Wednesday night, The Sun‘s Dan Woottoon insisted criticism of Meghan Markle was “nothing to do with race”.

He has challenged those saying otherwise to find one piece of outright racism published by a mainstream news outlet.

“If you are saying we can no longer criticise someone who happens to be mixed-race then we’ve got real problems in (the UK),” he said.

(“Openly” could be the key word here. Monarch-in-waiting Prince Charles sent so-called “black spider” memos to British politicians from the PM down in private for years).

And as Duchess of Sussex, Meghan Markle has said nothing overtly ‘political’ or unbecoming of a royal.

In the UK‘s Guardian newspaper, long-serving former editor Alan Rusbridger pointed out another factor in the press hostility: Prince Harry is currently pursuing phone-hacking claims against the publishers of the UK’s two biggest tabloids – Sun and the Daily Mirror. He’s also suing the publisher Associated Newspapers over the publication of a private letter.

“There is, to any reasonable eyes, a glaring conflict of interest that, for the most part, goes undeclared,” said Alan Rusbridger.

“There are quite a lot of worried newspaper executives and former editors . . . who have absolutely zero interest in treating the couple kindly or even-handedly,” he said.

Last week, the local Guardian reporter here was startled by five push notifications about the drama on her phone in just one morning from the Herald.

The “sheer obsessive intensity” of these alerts was out of kilter with the likely lack of interest in their content, she reckoned.

But last June – long before the current crisis – Mediawatch’s Jeremy Rose reported it was rare for the Herald website not to have a Meghan Markle story on its homepage an any given day.

The Herald alone had run 63 stories about her on its website in the previous month, he found. 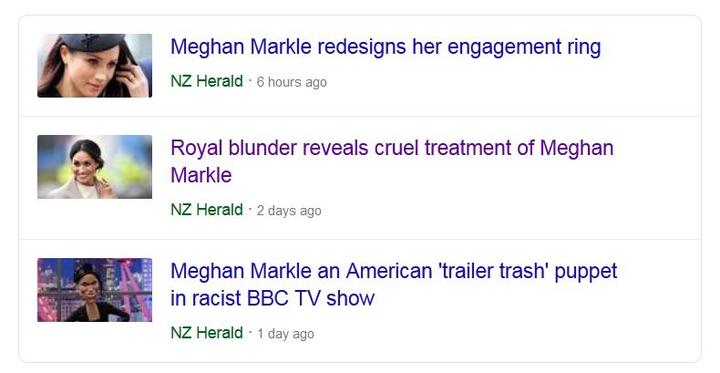 While little of the saga has much real relevance to New Zealand, Gordon Campbell pointed out on Scoop that “the case being brought by Prince Harry and Meghan Markle is relevant to our own debates about privacy, and about republicanism”.

“Our own laws are still struggling to find the right balance between celebrity privacy and freedom of expression,” he said.

“After all, the extent to which our own politicians can claim a right to privacy remains somewhat unclear ; and that’s a risky situation, given that New Zealand’s election campaigns have become increasingly presidential, and personality driven,” he added.

Prince Harry gave a speech this week in which he mentioned the big decision he and his wife had made.

“What I find interesting is that they’re stepping back because they don’t want to be in the media spotlight and on the front pages but every time they open their mouths and do what Harry did last night with these speeches they are straight back on the front page and leading those bulletins,”  Lloyd Burr in London said on Newhub at 6 the next day.

But it’s not as if the Prince himself sets the running order of those bulletins and writes the front page headlines himself. Journalists and editors do that.

As if to prove the point, Kate Hawkesby kicked off her ZB show on Tuesday like this:

“He may find peace away from the palace yes, but they’ve just opened the floodgates for more media scrutiny than ever before. Watch this space.”

A self-fulfilling media prophecy if ever there was one.

It’s too early to tell whether the Sussexes’ big move will work out as they hoped or not – but they’ve tried to break the cycle in a way the media never would.