Some US cities are moving to defund the police. Could a different system work in Australia too?

Since the death of George Floyd in the United States and amid an increasing spotlight on Indigenous deaths in custody in Australia, the movement calling for a world without police forces as we know them is gathering momentum.

Arguments for defunding traditional law enforcement were bolstered after Minneapolis City Council, where Mr Floyd was killed by police days earlier, voted to “end the current policing system” and build a new model of public safety.

The move appears to be a last resort after the department underwent training on racial bias and use of force as part of a pilot initiative to curb distrust between police and minorities.

Proponents of the “defund police” movement say replacing traditional law enforcement with community-led initiatives is the only way to truly end police brutality against people of colour.

“The idea of divesting or defunding the police, the context is primarily in the US,” said Chris Cunneen, a professor of criminology at the Jumbunna Institute for Indigenous Education and Research.

“But that doesn’t mean it’s not applicable in Australia, but it just has a different potential.”

The movement calling for some, or all, police power to be removed comprises a range of groups with different agendas, but all supporters want to see a reimagining of law enforcement.

“Defund the police” has become a common rallying call in the US, but whether that should mean the complete dissolution of the force or reinvestment of some funds into community initiatives is still up for debate. 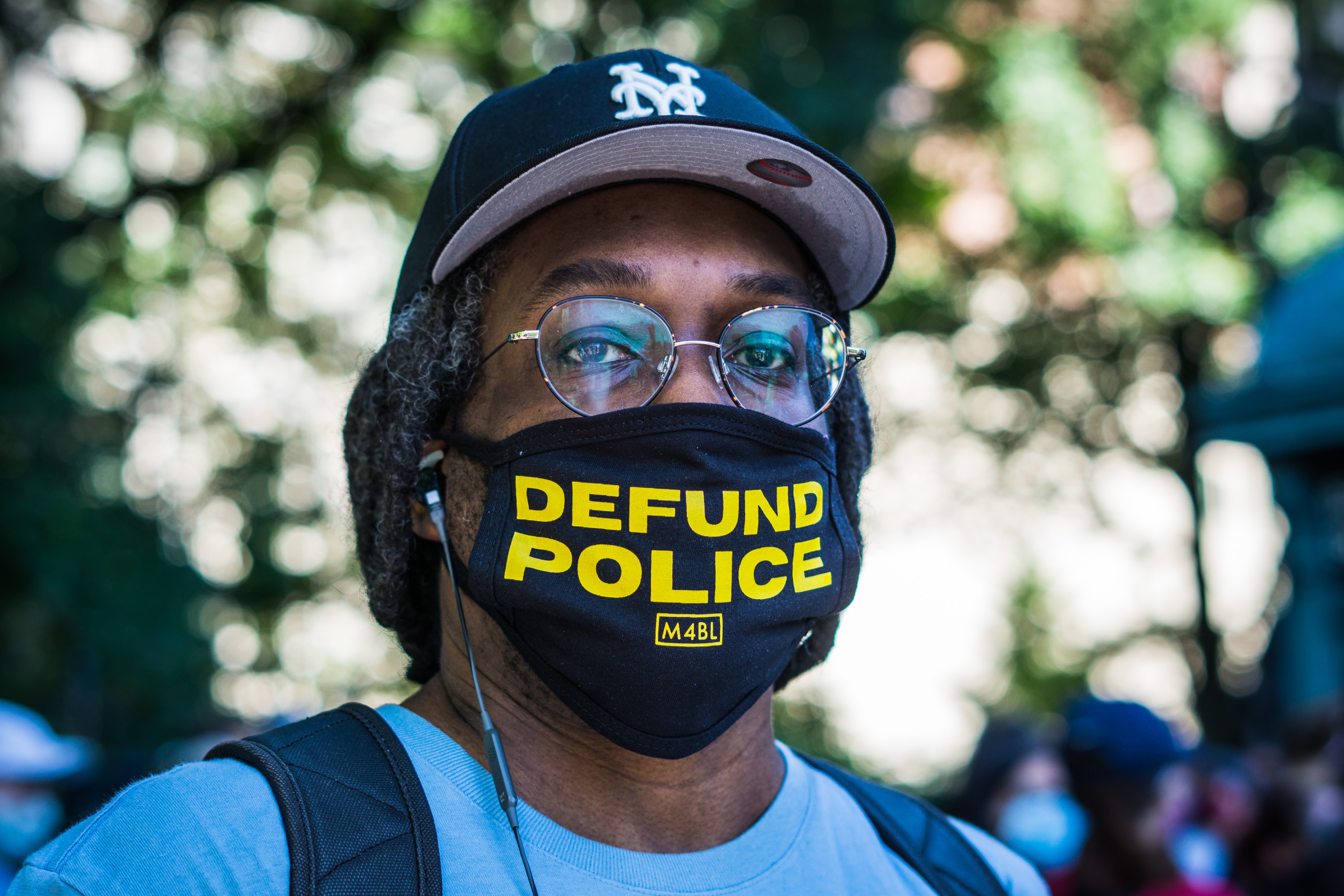 The council is yet to release details about what the new system will look like. “Our commitment is to end policing as we know it and to recreate systems of public safety that actually keep us safe,” Ms Bender said.

The reform will likely involve funding for police being reinvested in specialised community initiatives that respond to social and health issues.

In the US, there are almost 18,000 individual police departments, meaning funding is largely controlled by local governments. In Australia, however, state and territory governments are responsible for allocating funding and defining police policy.

This difference has allowed New York City Mayor, Bill de Blasio, to also pledge to reallocate some of the police department’s $5.9 billion funding to youth initiatives and social services, while in Los Angeles, Mayor Eric Garcetti said he would cut $214 million from the department’s budget.

Meanwhile, advocates for complete abolition say the modern understanding of police should be entirely scrapped and have provided different models for how this could work.

One way forward could couple community-based law enforcement with a more robust system of social services.

US abolitionist campaign, 8 to Abolition, has outlined eight key steps towards reducing the power of law enforcement, including defunding the police, removing police from schools, investing in community safe governance, providing housing, freeing people from jail and immigration detention, and allocating funding towards healthcare and support services.

“The principle is that we look at taking money out of the justice system, in this case the police, and how that can be invested, and how should that be invested, in other forms of community support and intervention,” Professor Cunneen said.

The calls for change are partly a response to the gradual increase in police responsibility over decades, often filling the gaps of underfunded public health services.

“It’s unfair that police have become the first port of call for everything and anything,” said Isabelle Bartkowiak-Theron, a senior lecturer in police studies at the University of Tasmania, who is also responsible for setting the coursework for Tasmania Police recruits.

Dr Bartkowiak-Theron, who specialises in police interactions with minorities, also said it was also important for conversations around police to consider the “root cause for offending”.

“A lot of that has to do with the conditions of deprivation in which some people have lived, and that is a systemic issue,” she said.

Many communities, both in the US, Australia and abroad, say they do not feel protected by the current system of law enforcement.

Indigenous groups point to studies that show many black and Indigenous people report feeling afraid to call police when in dangerous situations due to fears of racial profiling and brutality.

Questions have also been raised about whether police are adequately equipped to deal with social issues, such as mental illness, homelessness and drug addiction, people with disabilities, and some crimes, like domestic violence and sexual assault.

In 2018, Western Australian police commissioner Chris Dawson issued a historic apology to the state’s Indigenous peoples, stating police involvement in upholding past “laws, practices and policies” had led to “mistrust in law enforcement and the damaging of our relationship”.

Almost 30 years earlier, in 1987, a Royal Commission was held into Aboriginal deaths in custody following a public campaign by Indigenous activists.

But since the royal commission handed down their findings in 1991, another 437 Indigenous people have died in custody, according to The Guardian’s Deaths Inside database.

“We’re not talking about bad apples, we are talking about institutional racism that has been the case for a really long time,” Dr Bartkowiak-Theron said. “The relationships [between police and Indigenous communities] are completely broken.” For Dr Bartkowiak-Theron, one step towards mending the “fracture” is bringing Indigenous community members “into the fold” when it comes to training new recruits.

“This training supports police officers to conduct their duties more effectively, with awareness of cultural sensitivity,” he said. “It helps officers to overcome cultural misconceptions and inadvertent bias, and is essential for building trust among diverse communities.”

But some advocates say the time for training and education, which has been ongoing over the past few decades, is over.

“We’ve had decades of focus on improving police training, improving police cultural awareness, implicit bias training … and you’re kind of left with the question, not just here but in the US as well, what’s it all meant?” Professor Cunneen said.

“Relationships between racialised groups … are still highly volatile, there are still lots of examples of police violence.”

Could a different system work in Australia?

While the concept of community-led policing may seem far-fetched, in many Australian communities it is already a reality.

Night patrols, street beats, or street patrols are a common feature of Indigenous communities, where community members, many of them women, adopt some of the roles of police but with the goal of ensuring public safety and preventing harm.

Dr Cunneen said the role of the patrols differ depending on community needs, and as such there is no one definition.

Some responsibilities may include acting as a watchdog for the community, responding to arguments or disputes, guiding youth, and ensuring people are able to access necessary health and social support services.

“They vary a lot, which is a good thing in the sense that what’s important is the community needs to decide what the priority should be for night patrols,” Professor Cunneen said.

“Their function overlaps with police in the sense that they’re helping to maintain community safety, but they are doing it very much from an Aboriginal and Torres Strait Islander priority.”

While the majority patrols work alongside state police services, such as in inner-city suburbs like Redfern, in some remote Indigenous communities they are the only law enforcement body.

“It’s really much more of a community assistance program rather than what we normally understand as policing,” Professor Cunneen said.