Pretoria, South Africa – Close to 200 people have been arrested after clashes between foreign nationals and security forces broke out at the offices of the United Nations’ agency for refugees (UNHCR) in South Africa’s capital, Pretoria.

In a statement on Saturday, one day after the scuffles, police said 182 men and one woman had been taken into custody and were due to appear in court next week on charges of trespassing.

A further 224 women, 169 children and seven men were temporarily detained at  Lindela Repatriation Centre until the South African Department of Home Affairs can verify their immigration status and process them accordingly. There is no indication as to how long this process will take.

The people held are part of a group of about 700 refugees and asylum seekers who had camped out on the pavement outside the UNHCR building since early October, requesting resettlement and protection in the face of xenophobic attacks that had rocked the country the previous month.

South Africa has seen a series of attacks on foreign nationals since 2008, when similar violence resulted in more than 60 deaths.

An influx of migrants and refugees from other African countries, South Africa’s own socioeconomic challenges and political narratives that blame migrant communities for these woes have led many foreign nationals to say they do not feel welcome and fear for their safety. 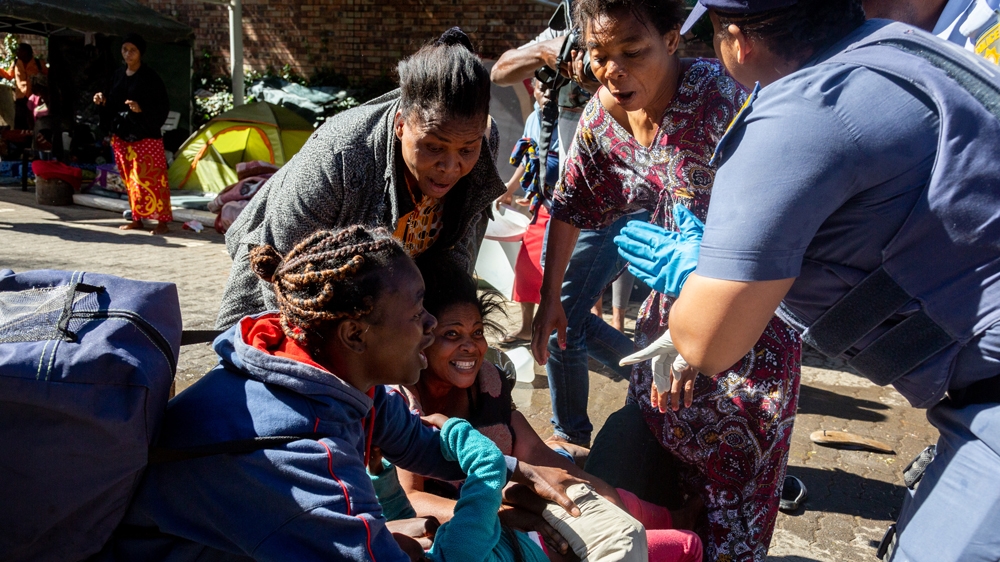 The most recent violence was triggered after the death of a minibus taxi driver, who was shot after allegedly attempting to intervene in a drug deal involving Nigerians in late August.

Pretoria’s city centre was on lockdown after residents went on a rampage, damaging property and attacking immigrants. The violence spread in the following days to other parts of the country.

Within three days of the shooting, nearly 200 people had been arrested for looting and about 50 foreign-owned shops were damaged or destroyed in riots across South Africa

Amid rising safety concerns, some foreign nationals then sought refuge in the street outside the UNHCR offices in Pretoria, pleading for resettlement to another country.

In a statement earlier this week, the UNHCR called for a “peaceful resolution” of the protest at its compound.

The tents and shacks lining the streets of the affluent suburb of Brooklyn led to local residents applying to force law enforcement officials to disperse the settlement, citing municipal bylaw violations.

On Wednesday, the Gauteng High Court ruled that the roadside occupation was unlawful, and ordered the refugees vacate the area within three days.

Community leader Aline Bukuru, however, said the group would not leave willingly.

“We have nowhere to go. We are here to fight for our rights and for our safety,” she told Al Jazeera on Thursday. 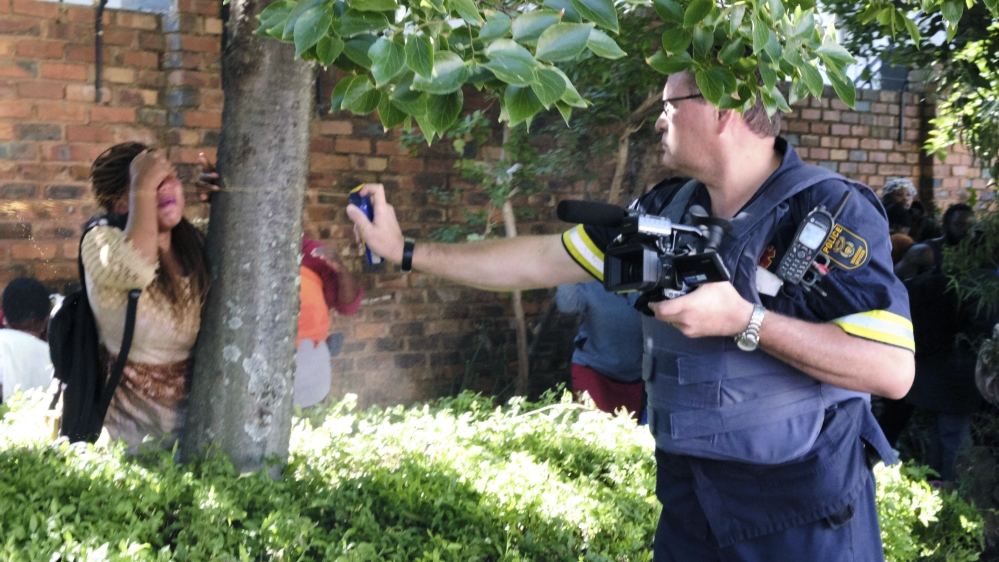 On Friday morning, residents and bystanders peered through the high fences that surround the UNHCR compound property as police began to gather.

Members of the South African Police Service, reeling from negative publicity from a similar eviction at the UN offices in Cape Town just a few weeks ago, initially attempted to enforce the removal with minimal force.

But when they were chased away by a barrage of stones hurled by refugees determined to stay put, police deployed water cannon and pepper spray.

Soon, the UNHCR compound descended into chaos, forming a shield wall and began making arrests while mothers screamed as they were being separated from their crying children.

Six-month pregnant Tecla Leba and her young daughter avoided the violence during the eviction.

“I do not want to fight,” she said, cradling her belly as she loaded her belongings into a worn-out pram.

Leba, who is from the Democratic Republic of the Congo, has been unable to register the birth of her daughter in South Africa two years ago. She has a copy of the application for a birth certificate, but not the actual document.

“Come, my baby, say goodbye to our home,” Leba said, as she tied her daughter to her back.

“This is all we have now,” she added, as she pushed the baby stroller filled with their remaining possessions through puddles left in the wake of the water cannon towards the busses waiting to take them away.