Armed with screening questionnaires and testing kits, medics and volunteers set up their testing station on the front porch of a block of flats in the gritty business neighbourhood.

Nurse Xola Dlomo told AFP they were asking one resident to mobilise fellow flat dwellers to come for screening and tests.

“They’ve been coming for screening and they are even open to testing if they have symptoms,” Dlomo said.

Already in a 21-day lockdown, South Africa is now embarking on the widespread testing and quarantine campaign involving some 10,000 field workers who are being sent out into homes in villages, towns and cities to screen for symptoms. 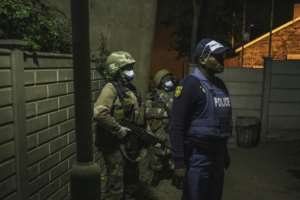 The testing plan to break the chain of infection appears to be modelled on the South Korean strategy which saw the Asian country bring the outbreak under control.

In Yeoville — a crime-prone area in Johannesburg’s hardscrabble central business district — eight small groups have been dispatched across an area covering one square kilometre.

“The health of our people is our first consideration,” said Kegorapetse Ndingandinga, overseeing the Yeoville team.

With his head tilted back, 58-year-old Michael Moshone, braced for his nasal swab, seated on a brick staircase in Yeoville.

“It is a little bit uncomfortable but you’ve got to be strong… because you want to know exactly what is going on with you,” Moshone, wrapped in a green, gold and black scarf, said after his sample was taken. 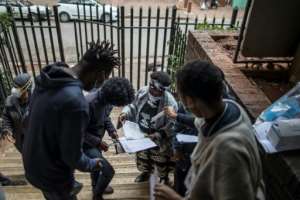 Before the rollout of mass screening and testing, more than 47,500 tests had been performed, 6,000 of them at public health centres.

But for Health Minister Zweli Mkhize that number is too low for a country of 57 million people where several millions have underlying conditions such as HIV and TB.

The turnout was slow on the first day, Dlomo said.

But for Moshone who has lived in the area for 26 years, the trickle of people is no surprise.

It reminds him of the early 1990s when HIV first emerged in the country, which now has the world’s highest HIV prevalence rate.

“In South Africa, this thing is like HIV because when HIV started here… we didn’t take it seriously until we saw people dying,” he said. 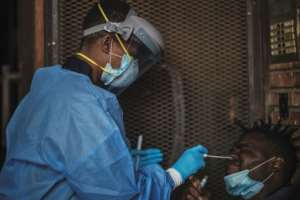 But Dlomo is hopeful that visibility of heath care workers in communities will push people to realise “that this thing is serious and they need to take precautions”.

World Health Organisation technical officer Mary Stephen told AFP that based on how the virus has spread through other countries, governments are urged to scale up public awareness, surveillance and medical care.

Currently the state will be able to carry out 5,000 tests in 24 hours at 10 laboratories countrywide, but at full capacity it can process 30,000 tests each day.

The country is currently observing a 21-day lockdown patrolled by the police and military, a perfect time to carry out the mobile testing, according to the health minister.

But the lockdown is little respected in the densely-populated Yeoville.

“They don’t want to isolate themselves inside their houses. They come out with their kids, they don’t care,” said Masechaba Motaung, pointing at a busy street.

“They take this virus as if there is nothing happening.”

Police have used rubber bullets, teargas and whips to force people to maintain social distancing and force people back into their homes.

While South Africa has so far only reported 7 deaths and 1,505 infections, Mkhize has warned that the relatively small growth in numbers was perhaps “the calm before a heavy and devastating storm”.