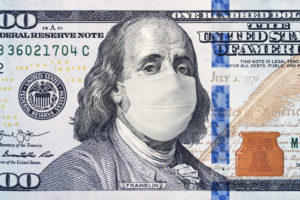 According to a study conducted by the National Bureau of Economic Research, the economic effects of the coronavirus could be deadlier than the virus itself.

The bureau found that the total lives lost to the virus in the U.S. may “far exceed those immediately related to the acute COVID-19 critical illness…The recession caused by the pandemic can jeopardize population health for the next two decades.”

The study, which was conducted by professors at Duke University, Johns Hopkins University, and Harvard Medical School, focused on the almost instantaneous unemployment of more than 20 million Americans between March and April 2020.

The three authors, Francesco Bianchi, Dongho Song, and Giada Bianchi used almost 70 years of previous data on unemployment, life expectancy, and death rates from the Bureau of Labor Statistics and the Centers for Disease Control. The group separated the effects of the 2020 unemployment rise from other factors that affect life expectancy and mortality.

The study’s main finding was over the next 20 years over 1.3 million more people will die than normally due to the unemployment shock caused by the pandemic. The study also showed that Black Americans, women, and the Latinx demographic will be disproportionately affected by the excess deaths.

The study also found that shutdowns, business closings, and other coronavirus restrictions may save lives in the near term but will cost lives in the long term. However, the group wanted to emphasize that “we do not want to suggest that policymakers should refrain from ordering lockdowns as necessary lifesaving measures” rather, policy should also provide “enhanced health and economic support for the most vulnerable portions of the population.”

The study did have several upsides, including that the U.S. has never seen a recession reverse as fast as this one and the economy might recover faster thanks to technology. The authors also noted, “this is the first recession with the Affordable Care Act in place, a critical resource to mitigate the effects of unemployment on citizens’ well-being.”

The coronavirus pandemic has ravaged the U.S. and exposed deep divides between the haves and have nots, which has only gotten worse due to the pandemic. Many college-educated adults are able to work from home, stay safe, and even save money. However, low and minimum wage workers lacking education have had to continue traveling to work using public transportation while also receiving lackluster to no benefits and are forced to interact with strangers who may be carrying the virus. The virus has killed more than 420,000 Americans and President Joe Biden said last week that number will easily break 500,000 by next month.

In U.K., Concern Grows Over Vaccine Hesitancy Among Minority Groups

This Group Wants To Help Black-Owned Businesses Amid COVID-19

This Group Wants To Help Black-Owned Businesses Amid COVID-19