If you’re not busy visiting the tourist fire-affected destinations in Australia – or if you’re on your way around? – the annual Parrtjima light festival in central Australia is gearing up to be a beauty.

Aptly named Lifting Our Spirits, the spectacular lighting of the MacDonnell Ranges returns in April with new illuminations immersing visitors in the stories, symbols and knowledge of Aboriginal culture.

A series of talks, Deep Listening, with a line-up of contemporary speakers and topics will also be hosted in the Desert Park Cinema together with a program of films from Aboriginal filmmakers are also being featured. Local storytellers will inspire visitors in Fire Stories hosted at Todd Mall, as well as an amazing line-up of cabaret, live music and workshops showcased on the Todd Mall stage across the festival period.

Award-winning Indigenous singer-songwriter Dan Sultan will also perform his signature soulful flair and rich roots and blues music under the vast desert skies of the Red Centre. Sultan will perform alongside some of Australia’s most exciting performers including Australian earth-sound band, OKA, and a range of Australian performers and voices as part of a series of soon-tobe announced music, talks, films, and workshops to be held in Alice Springs Desert Park and the CBD’s Todd Mall.

Northern Territory Major Events Company Director Engagement and Culture Paul Ah Chee Ngala has called Parrtjima a festival for people from all walks of life and generations and “an opportunity to be immersed in a rich and ancient heritage. We encourage visitors to come and experience a festival that connects us all through story, art, landscape and light.”

Featured installations in this year’s programme:

Grounded – Women’s Hairstring Dreaming by Alison Multa
This artwork shows kungkaku puturru, the hairstring that women make from their own hair for ceremony. In the older days, women used to cut their own hair and create this string by spinning the hair on their thighs. The hairstring was used for dancing, ceremony and domestic purposes. Kungkaku puturru is connected to the Tjukurrpa place Kungkayunti (Brown’s Bore). Kungkayunti is the place where the ancestral women, who travelled from Ntaria (Hermannsburg) to west of Kintore, stopped and danced. Kungkayunti means women dancing.

Grounded – Ducks by Gladys Anderson
A series of paintings depicting, in a very naïve style, the presence of the birds in the surrounds of Tennant Creek. The artist used to paint various birds including crows, an important Dreaming for the Warumungu people, but now, she prefers the white duck that can be seen in the recreational dam at Tingkarli, north of Tennant Creek.

Grounded – Papa Tjukurpa by Jimmy Donegan
Depicting the dingo Dreaming and the artist’s Country rock hole, Dulu, where lots of women’s and men’s dingoes residing there, digging up water and hunting at Pilantjara rock hole in the Country area of Dulu. This piece is papa walka, dog design.

Grounded – Murray Bore by Heather Watson
Heather paints Murray Bore and the surrounding Country. Murray Bore is a rock hole that has water year-round found just off the Tjuntjuntjara road in Western Australia, close to Irrunytju. This was the home of many old people. The Young, Brown, Roberts and Woods families all live here.

Werte (pronounced woord-da) – Meeting Place by Kumalie Kngwarraye Riley
The central influence of Werte, the concentric and lineal lines of the meeting places key to Central Desert art styles, are explored through the groundwork and layout of the signature installation.

Werte – Grass Seed by Greg McAdams
A proper Dreaming story from the artist’s Country Yamba, given to him by his uncle. It highlights the artist’s desire to educate the young with cultural tools like song and dance and give them guidance.

Werte – Alatye (Bush Yam) by Rachel Wallace
Coming from a family of artists, painting helps Wallace remember Dreaming stories. Passed down to the artist from her grandfather, it is the first time the family has decided to depict this Dreaming story, in order to carry on the knowledge passed down by older generations of their family. She states “The circles are different tribes, the circle in the middle is us. The little ones are tribes and families, that are just starting to know us, making their way to us.” The little flowers are a guide for the ones who are travelling. The one in the middle is the bush yam, like the pretty woman – she who didn’t know who to fall for, so she turned herself into a bush yam.

Arleye (Emu) – children’s play area
A fun, colourful and interactive game of discovery for children of all ages, featuring illuminated round discs that form the shape of a giant emu footprint. As children jump from one disc to another, they activate different colours. An accompanying light-box installation imparts scientific knowledge about the traditional uses of the emu for food and medicinal practices, and Arrernte words and symbols will allow children to discover and learn while they play. 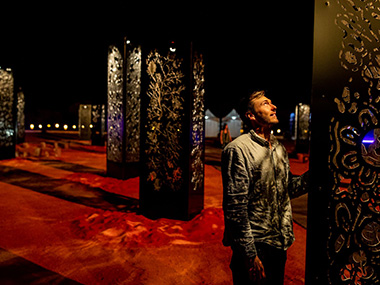 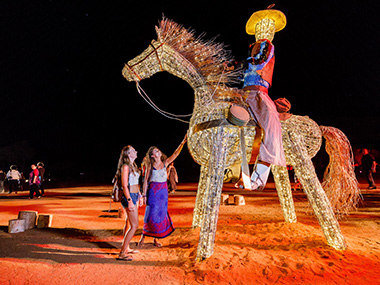