Thousands of Australians yesterday defied COVID-19 disease prevention rules to protest the country’s national day, held on the anniversary of British colonization of the vast continent that its Aboriginal population marks as “Invasion Day.”

Officially recognized as Australia Day, the day also sees annual rallies drawing attention to the injustices faced by Aborigines and calling on the government to change the date of the national holiday.

The celebration of the origins of the modern nation is a time of mourning for Australia’s Aborigines, who have inhabited the land for 65,000 years and view the arrival of British settlers in 1788 as the beginning of two centuries of pain and suffering. 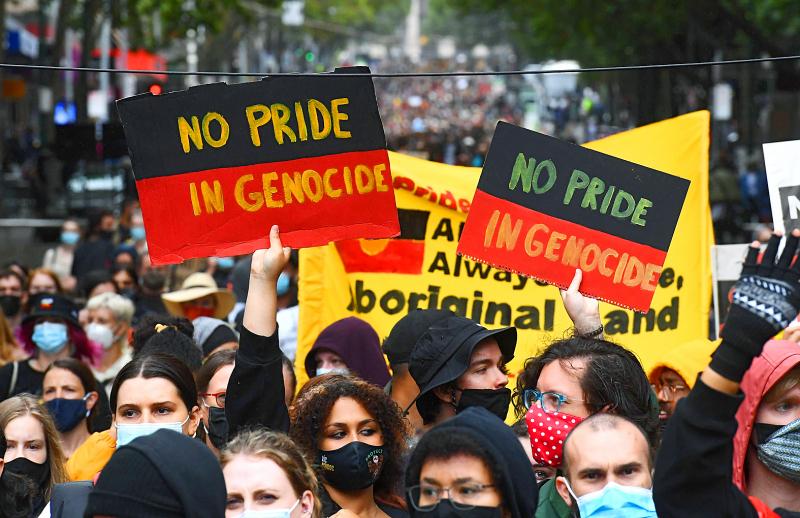 Thousands of people gathered at a central Sydney park in defiance of police threats of fines and arrests for breaching a 500-person limit on public gatherings, although organizers called off a march through the city that usually follows.

Police said that five people were arrested, including one who was charged with assaulting a police officer, but praised the crowds as largely peaceful.

Authorities earlier refused to waive the cap on numbers, despite no new cases being detected in Sydney for more than a week.

Chants of “Sovereignty was never ceded” and “No justice, no peace” rang out, while others held up placards with slogans including “Not a date to celebrate” and “Black Lives Matter.”

“For us it represents cultural genocide. Our families being ripped apart — years and years of disease and famine — and the intergenerational impacts of that are still being felt today,” Gomeroi man Dylan Booth said.

Australia last year failed to meet most key targets on closing the health and well-being gap between Aboriginal Australians and the rest of the population, with soaring incarceration rates among Aboriginal communities and a life expectancy about eight years less than the national average.

Thousands also attended protests in other major cities across the country, with rally organizers encouraging attendees to wear masks and maintain social distancing where possible.

In Melbourne, where an estimated 10,000 turned out to march through the streets, attendees walked in 100-person groups to comply with COVID-19 rules.

Some waved Aboriginal flags, while others held aloft signs including “No pride in genocide” and “You are on stolen land.”

“People [are] having barbecues and shrimp on the barbie, and celebrating the death and destruction of these people, the oldest continuing living culture in the world,” The Age reported Aboriginal Lidia Thorpe, an Australian senator, as telling the crowd.

Comments will be moderated. Keep comments relevant to the article. Remarks containing abusive and obscene language, personal attacks of any kind or promotion will be removed and the user banned. Final decision will be at the discretion of the Taipei Times.

America's billionaires have grown $1.1 trillion richer during the pandemic