A mystery of two mummified bodies found lying deep in an outback cave continues to haunt a remote sheep station.

The bodies were found slumped against the walls of Mullamullang Cave on the Nullarbor Plain in Western Australia on July 11 and 30, 1991.

Police couldn’t determine how, or even when, they died and the case was buried in the station’s archives until the report was unearthed recently.

Forensic and anthropological evidence could only confirm the men were Aboriginals living a traditional lifestyle, and could have died as early as the 1880s.

Never reported missing and almost forgotten by time, the bodies lay in their rocky graves until a cave explorer stumbled upon them by chance.

The body of a 35 to 40-year-old full-blood Aboriginal found in Mullamullang Cave on the Nullarbor Plain in 1991. Who he was and how or when he died is still a mystery

The remote area now lies within the 712,000 hectare Madura Plains Station, the third biggest sheep station in Australia which sold for $10 million in 2016.

He and his friends photographed the shocking discovery, found about 2.4km from the entrance, and led local police to the first body the next day.

‘The body was decomposed and in a mummified state. There was no obvious sign of clothing, footwear, or other property upon or near the body,’ major crime squad’s Detective Sergeant Carey wrote in his report.

After removing the body from the cave, police mounted a second expedition on July 30 that found the second body about 80m away on the other side of a rockfall.

This one was propped up against the cave wall and the head and legs had fallen off the torso. 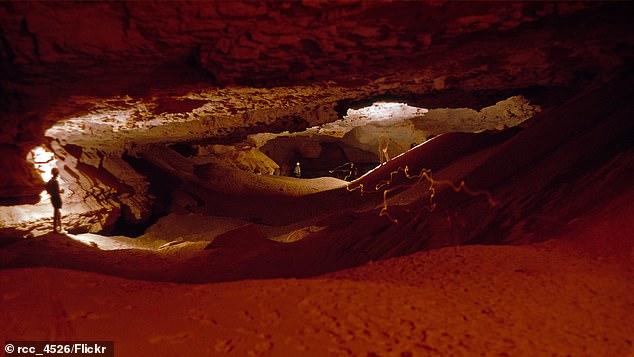 Never reported missing and almost forgotten by time, the bodies lay in their rocky graves until a cave explorer stumbled upon them by chance. Pictured is a more recent photo of the cave

All post-mortem examinations were able to determine was that the first body was a 20 to 25-year-old man of mixed race, and the second an Aboriginal man aged 35 to 40.

No skull fractures or other injuries to bones that would have contributed to their deaths or even caused discomfort were found, and there was no evidence of criminal activity.

The leading theory, which DS Carey’s report concluded was most likely, was that the men got lost in the cave when their firesticks burned out, and starved to death.

‘I tend to favour the option that both men perished after becoming stranded inside this cave following the expiration of their source of light,’ DS Carey wrote.

Firesticks are made from myaparium or sugar tree, a type of sandalwood, but it was not clear why the men ventured so deep in the cave. 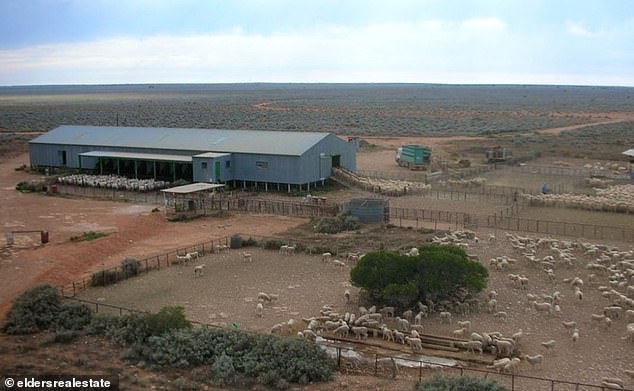 The remote area now lies within the 712,000 hectare Madura Plains Station, the third biggest sheep station in Australia which sold for $10 million in 2016

The only clues police found were fibres under where the men’s bodies would have been, a decaying strand of knotted rope, and a floppy hat 3m from the first body.

Frustratingly, each of these clues was found to be a red herring, or raised more questions than answers about the identities of the bodies.

The fibres were eventually discovered to be human hair and grass, the same material used to make loin cloths by Aboriginals living a traditional lifestyle.

Police wondered if they used the rope to tie themselves together to avoid being separated in the cave when their firesticks went out.

However, this theory assumed the two men entered the cave together, which could not be conclusively proven.

The hat appeared to hold the most promise for a breakthrough, and police traced the manufacturers label to Maxford Pty Ltd, in Perth’s Osborne Park.

However, the company said the hat was not one made or imported to Australia, but was popular in Asia.

Mullamullang Cave, formed about 30,000 years ago, was right in the middle of the Meahineng tribe’s ancestral lands and well known to them

DS Carey thought the hat was therefore likely brought into the cave by a tourist and lost there long after the men died.

Fresh out of leads, police turned to Albert Carlisle OAM, 74, an expert who lived for many years, beginning in childhood, near the local Aboriginal tribe.

Mr Carlisle first became acquainted with the Meahineng tribe in 1931 when his father, Albert Snr, was appointed ‘protector of Aborigines’ and sent to nearby Eyre.

‘From the age of 14, young Albert was able to communicate freely with members of that Aboriginal clan,’ DS Carey wrote.

‘He was to become familiar with their way of life, their dialect, customs, and beliefs.’

Mullamullang Cave, formed about 30,000 years ago, was right in the middle of the Meahineng’s ancestral lands and well known to them.

At the time the cave, which they called Gubble Kunbennah meaning ‘water god’, had pools of drinking water and was a hunting and gathering ground. 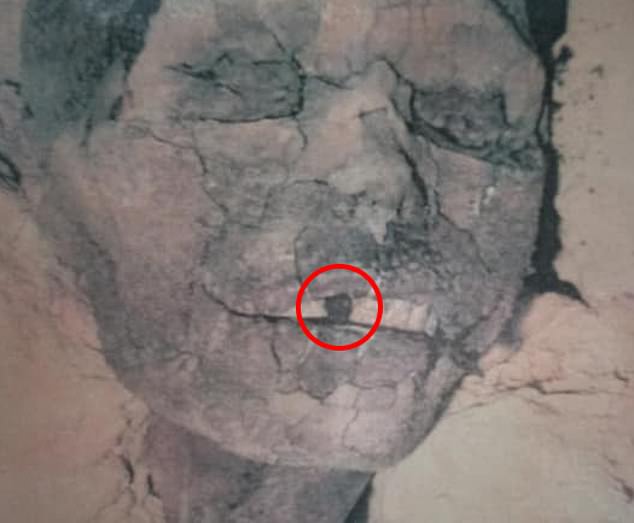 The tribe had their front centre tooth removed in an initiation ceremony for their coming of age. The second body in the cave, the full-blood Aboriginal, had this tooth missing (pictured)

Bodies missing in cave for ‘a century’

July 12: Mr Lane and friends lead police to the body

July 18: First body is removed from the case for post-mortem examination

Geordie, the most senior of the trio and a renowned storyteller, span a yarn to Mr Carlisle in the mid-late 1930s about his long-dead little brother Buddon.

The old man claimed a ‘true story’ was that a ‘long, long’ time earlier, Buddon went into the cave in search of water and never came out.

‘Geordie believed the Mulldabbie or devil had taken him,’ DS Carey recounted.

Mr Carlisle reckoned from how Geordie told the story that Buddon went missing in the 1880s or 1890s.

‘He tried to obtain a better idea of time from Geordie but said he was unsuccessful as time had meant nothing to full-blood Aboriginals,’ DS Carey wrote.

Geordie spoke of a second person who vanished in the cave, but only knew he was younger than Buddon.

Mr Carlisle later searched the first few hundred metres of Mullamullang Cave and was satisfied it was the same one the elder had described.

All three elders Mr Carlisle knew, and many others of the tribe, had their front centre tooth removed in an initiation ceremony for their coming of age.

The second body in the cave had this tooth missing, and the post-mortem examination found it was removed before death.

Buddon would have gone through this rite of passage but the younger man likely would not have.

DS Carey wrote that Mr Carlisle’s recollections of the tribe’s life were backed up by other published sources.

However, a question kept popping up during the investigation for which there was no easy answer: Why were the pair so deep in the cave in the first place?

‘He spoke of Aboriginals trapping rats and other small animals in shallow caves and rockholes.

‘He also thought it was most unlikely that Aboriginals would have ventured so deep in search of food or water.’

Mr Carlisle and WA Museum expert Mance Lofgren questioned whether there was another, hidden, cave entrance closer to where they were found.

No entrance besides the main mouth of the cave has ever been found. 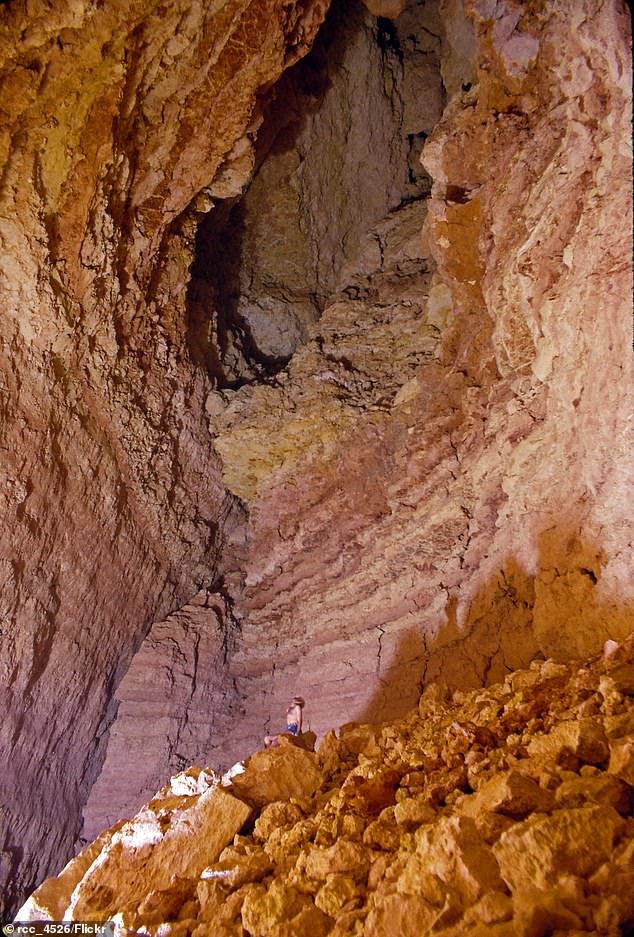 DS Carey’s report concluded it couldn’t be definitively confirmed who the men were, when they died, or if they were together.

How they died also, other than by starvation, also remained a mystery with two theories summed up that the report’s end.

‘1. Both men may have become disoriented after being deprived of their source of light, and have mistakenly continued into the cave, rather than towards the entrance,’ he wrote.

‘2. Perhaps our victims may have known of and used another entrance, which was nearer where they were eventually found.

‘That suggestion would seem reasonable considering that their final resting place was within 400m of a reliable water source.’

Statement On International Day Of The Girl Child 2020