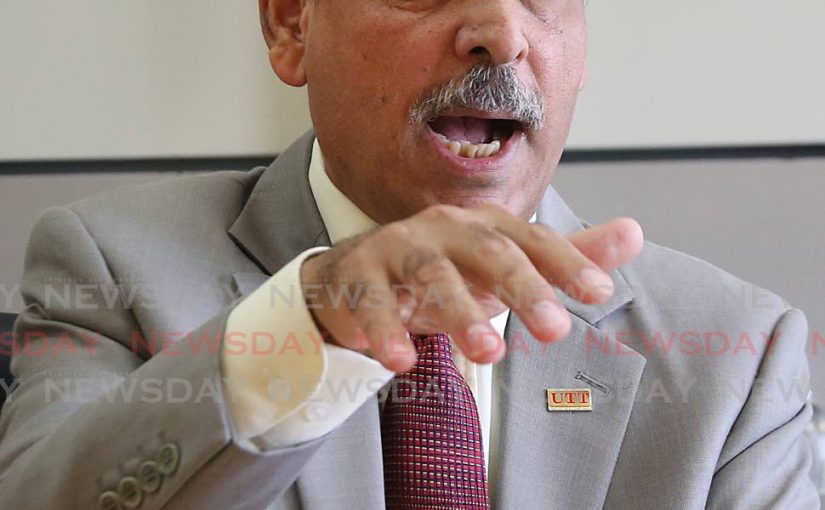 PROF Sarim Al-Zubaidy resigned on Wednesday as president of the University of Trinidad and Tobago (UTT), after days of rumours circulating.

Asked to comment on a memo in his name which was e-mailed to media houses, Al-Zubaidy said, “If it is there, it is there.”

Asked if he was resigning prematurely ahead of the date in August when his contract reportedly expires, Al-Zubaidy said everything he wanted to say was contained in the memo.

When Newsday asked why he was resigning and what his future plans are, he repeated his previous answer.

That period was marked by the retrenchment of several hundred academic and non-academic staff in light of restructuring brought on by calls to cut costs.

Staff were retrenched in several rounds, amid claims this might lower teaching quality and deny some staff a procedural fairness in dismissal.

A citizen of Iraq, Al-Zubaidy has a PhD in mechanical engineering from the University of Hertfordshire and has worked in places that include Oman, Kazakstan, UAE, New Zealand, Malaysia, Australia, Jamaica and the UK, the UTT website indicated.

Education Minister Anthony Garcia told Newsday that before he could comment on the resignation, he understood UTT acting chairman Prof Clem Imbert first wants to speak to UTT chairman Prof Ken Julien, who is out of the country.

Al-Zubaidy’s memo, titled Tender of Resignation, was dated January 14 and addressed to all members of staff.

Init he said, “I wish to inform the university community that I have officially tendered my resignation as President of UTT effective March 31.

“However I will be proceeding on vacation leave and my final day in office will be February 25.”

He commented on his tenure,

“I see a young university that has the potential to further evolve into a well-respected, well-established tertiary institution that can play a pivotal role in the development of the human resources of the country and the region. “Indeed we have been able to surmount the many challenges, but they have only served to steer us on the right path towards providing quality tertiary education and research for the advancement of TT.”

Al-Zubaidy said he has had the pleasure to work with some of the most brilliant academic minds and to witness the university’s innate talent and vitality.

“I am confident these qualities will serve the university in good stead as it continues forward in the pursuit of excellence.”

He extended a gracious farewell to university staff and best wishes in their future endeavours, and to the Student Guild whose tireless work he said had created a student-centred environment. “Finally I wish to extend a thank you to the chairman and members of the board of governors of UTT for allowing me the opportunity to dutifully serve this national institution with pride. I wish you all the very best as you transition into the new phase of UTT.”

The Do's and Don'ts of Data: How to Keep Your Company Compliant in Today's Data-Driven World