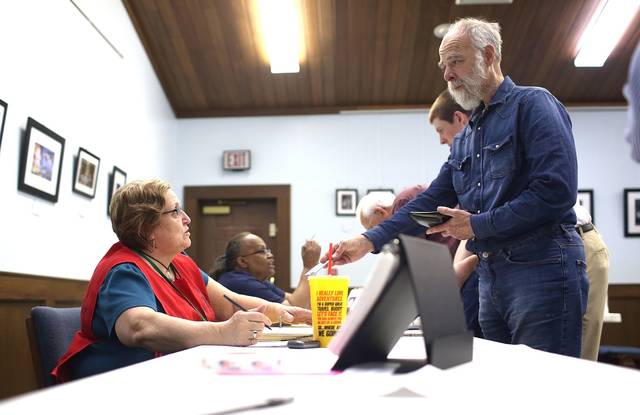 The first round of ballots is set to go out in one week in North Carolina’s early-season primary, just as another legal battle over the state’s voter ID law has put a hold on the requirement — at least for now.

The start of this year’s election season was in doubt several times over the past several months after an array of legal challenges. The courts provided one last wrinkle as state officials prepared to implement new ID rules for the 2020 cycle.

On the last day of 2019, U.S. District Court Judge Loretta Biggs issued an injunction enjoining the state from implementing a new voter ID law for the primary elections and potentially preventing it from taking effect for the entire cycle. A trial in the case is pending.

In her ruling, Biggs said plaintiffs, the state chapter of the NAACP and six of its local chapters, had “made a clear showing” of harm from the law, Senate Bill 824.

“Plaintiffs have demonstrated that, if allowed to go into effect, S.B. 824 would likely work irreparable harm against them and, more broadly, minority voters in North Carolina’” the ruling stated.

She noted further that plaintiffs appear to have a strong argument that the law was drafted with discriminatory intent. The state’s previous voter ID law, part of a broader elections bill, was struck down on those grounds.

Opponents of the new law say it, too, was created with discriminatory intent and would have a disproportional effect on minority voters.

Biggs also called the state’s fulfillment of the law’s requirement for broad public information efforts “lackluster” and said the bulk of the work to inform the public remains undone.

After the ruling, the state Board of Elections announced it had pulled a planned mailing to voters explaining the new law.

“The N.C. Department of Justice must ask for a stay in this case,” said a joint statement from Senate leader Phil Berger, R-Rockingham, and House Speaker Tim Moore, R-Cleveland.

“This last-ditch effort from an unelected judge to stymie the implementation of voter ID and prohibit the legislature from defending the law it wrote is inappropriate.

“Legislative leaders have worked in good faith to accept numerous forms of IDs and allow for certain exclusions. The result is one of the most lenient voter ID laws in the nation.”

Last week, Stein agreed to appeal the ruling, but a statement released last Thursday by the department said it was too late to do so for the primary.

“However, to avoid any further voter confusion in the primary election in which absentee voting begins in just 11 days and to ensure that the primary election proceeds on schedule and is administered in an orderly manner, the department will not seek a stay of this injunction before the primary,” the statement read.

The voter ID law was introduced in a contentious lame-duck session after voters in 2018 approved a constitutional amendment adding photo identification to the requirements for voting.

The bill passed in early December 2018. Gov. Roy Cooper vetoed the measure, but Republican legislators voted to override the veto on Dec. 19, 2018, picking up one Democratic vote each in the House and Senate.

The law was modified this year after strict requirements prevented the use of IDs for dozens of state universities and local governments.

As voting gears up, the latest round of voter registration data, released Dec. 28, illustrated that demographic and geographic trends in the voting population seen in 2018 continued in 2019.

Last year, the state added 273,288 voters, an increase of about 4%. The statewide registration breakdown stands at 37% Democratic, 33% unaffiliated and 30% Republican.

In his end-of-year analysis of the 2019 registration trends, Catawba College politics and history professor Michael Bitzer highlighted the increasing concentration of voters in urban counties, with Mecklenburg, Wake, Guilford and Cumberland counties leading the way in new registrations.

Those counties show a higher percentage of Democrats than the statewide average, with 39% registered Democrat, 34% unaffiliated and 26% Republican.

The highest concentration of Republican registrations is among a belt of suburban counties around the fast-growing urban regions.

“Registered Republicans were only 21% of the new urban voters compared to 34% registered as Democrats,” Bitzer said in a follow-up interview with Carolina Public Press.

“In suburban counties, it was the exact opposite: 34% registered Republicans to 23% registered Democratic.”

The demographic trend seen in 2018 continued as millennial and Generation Z voters, the two youngest cohorts of voters, continued to grow as a percentage of the voting population and continued to show a preference for registering as unaffiliated.

“Since the November 2016 election, North Carolina has seen over 1.3 million voters registered, with 60% of these new voters millennials or Generation Z,” Bitzer said.

“Among both of these generations, only 22% registered as Republican, 30% registered Democratic, and 47% registered unaffiliated.”

It’s a trend that he expects will continue through this year when registrations are expected to pick up because of heightened interest in this year’s presidential race.

“Of the total 6.8 million registered voters in North Carolina, 35% are under the age of 40 as of the beginning of 2020, and that percentage will likely only increase as we get closer to November,” Bitzer said.

If the younger voters can increase their turnout, he said, they stand to become the largest block of voters in 2020.

The racial makeup of the electorate is also shifting, Bitzer said.

“This continuing diversification of the eligible voter pool may have an impact on November’s general election as well. Over 71,000 voters registered since 2016 are Hispanic/Latino.”