When will you get jabbed? Insiders reveal Covid vaccine line-up after healthcare workers, elderly

Manufacturing, education and tourism workers should be next in line to receive the coronavirus vaccine after the elderly and healthcare workers, according to a proposal.

The Australian Chamber of Commerce and Industry (ACCI), which seeks to influence policy on behalf of its members, has presented a plan to government asking for workers in these sectors to get priority jabs ahead of ordinary people under 50.

The plan, written by ACCI health and safety director Jennifer Low, has been ‘well received’ by Treasury and the federal Health Department, The Australian reported.

It is not known whether vulnerable staff exposed to large numbers of people such as public transport workers or supermarket staff were included in the Chamber of Commerce (ACCI) plan, despite large numbers of workers returning to both the Sydney and Melbourne  CBDs as restrictions ease. 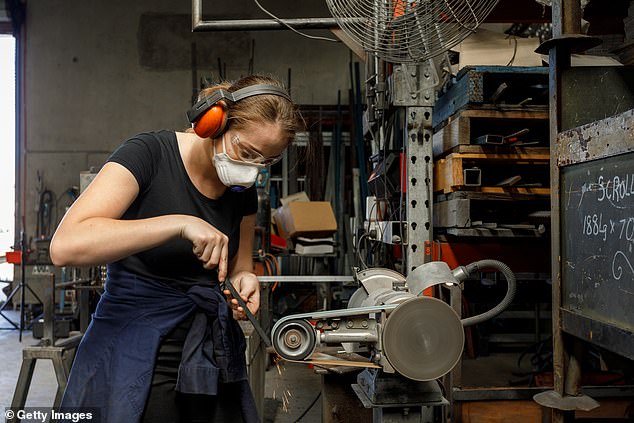 WHEN WILL YOU GET JABBED?

The Chamber of Commerce and Industry wants workers from its member industries in manufacturing, education and tourism to be classed as ‘critical workers’ so they get innoculated in Phase 2 of the vaccine rollout.

This is the official rollout plan as of January 16:

Phase 1a: to cover 678,000 of the most vulnerable and exposed people including quarantine and border workers, frontline health workers, aged care staff, disability workers and the elderly. 1.4 million doses of the Pfizer-BioNTech vaccine, with the government hoping for approval by the end of January.

Phase 1b:  to cover 6.14 million Australians including anyone over 70 years old, other healthcare workers, those with an underlgying condition and high-risk workers like emergency services and meat processors. It will also include indigenous people aged over 55. Up to 14.8 million doses.

Phase 2a: to cover 6.57 million people including Australians over 50, Aboriginal and Torres Strait Islander people who are between 18-54, and critical high-risk workers. Up to 15.8 million doses

Phase 2b: to cover 6.64 million people – the rest of the adult population, plus anyone who missed out. Up to 16 million doses.

Phase 3: to cover 5.7 million children if recommended with up to 13.6 million doses set aside.

The plan reportedly asks for the government to prioritise manufacturing, education and tourism as sectors with ‘critical workers’ so they are innoculated in Phase 2 of Prime Minister Scott Morrison’s vaccine road map.

For manufacturers, foreign supply chain risks mean if imported material is disrupted and production reduced, there would be a delay in getting goods to customers, the ACCI plan says.

Australia’s Austrade website says advanced manufacturing accounts for $100 billion worth of output and is a growing export sector.

The coronavirus pandemic laid bare Australia’s reliance on foreign imports and lack of self-sufficiency as it could not make or import vital medical supplies in the early months of the pandemic.

‘Our key exporters (be they goods, education, professional services or tourism) are losing contacts and connections with their international buyers and are not able to compete with competitor countries that are able to visit face to face,’ the ACCI plan says.

‘This is particularly the case in China where ­person-to-person and business-to-business contacts are even more important, given the current government tensions,’ the document says, as quoted in The Australian. 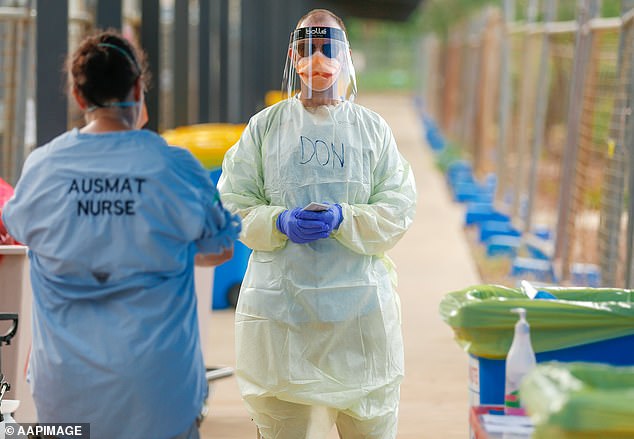 Health workers throw out their used protective gear at the Howard Springs quarantine station in Darwin on Thursday. Frontline healthworkers will get the first jab 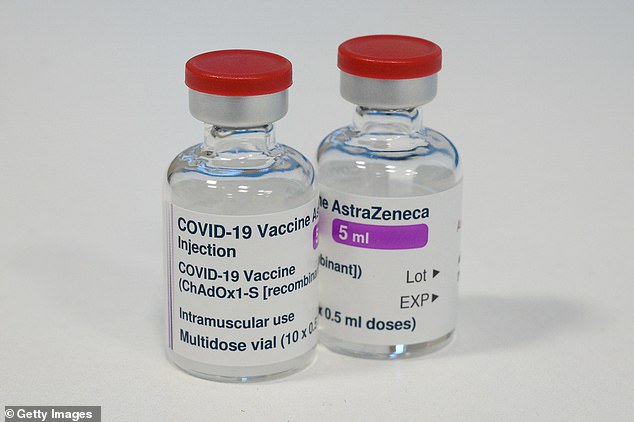 Vials of the AstraZeneca coronavirus vaccine. Australia has the capacity to make this vaccine through CSL and it is likely to be the one given to most Australians

Similarly Australia’s education ‘export’ sector has been hit by the pandemic with business lobby groups keen to get the cash flowing again.

Victorian Premier Daniel Andrews is reportedly preparing a proposal to National Cabinet to bring in more foreign students under a separate quota – even as numbers of returning Australians have been cut due to the spread of new more infectious strains.

Australia’s international borders were shut in March 2020 due to the coronavirus pandemic. 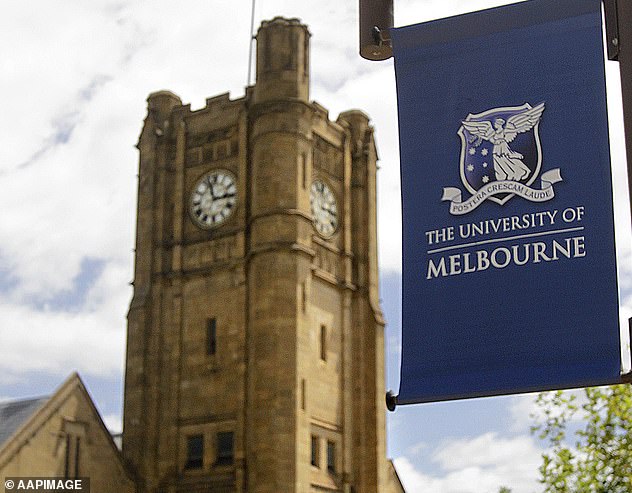 Earlier this month, the ACCI also lobbied both Federal and state governments to open up the borders to international arrivals based on ‘risk’.

‘We need the movement of people, services and goods to continue where it is safe to do so. Our economic recovery and the many businesses in trade and tourism rely on it,’ ACCI’s acting CEO Jenny Lambert said on January 8.

‘This could include dedicating certain airports to take only lower risk arrivals and putting in place bespoke quarantine arrangements that are proportionate to that risk, such as we have done for seasonal workers from the Pacific.’

Australia’s tourism sector was also flagged by the ACCI plan.

Although quarantine hotels have had a steady stream of government bookings, small tourism operators, airlines and leisure travel businesses have been crushed by the Covid travel bans.

The first official phase of the Federal Government’s vaccine rollout plan will give the Pfizer-BioNTech jab to 678,000 of the most vulnerable and exposed people including quarantine and border workers, frontline health workers, aged care staff, disability workers and the elderly.

Prime Minister Scott Morrison has said he hopes the Pfizer vaccine will be approved by the end of January, ABC News reports, with up to 1.4 million doses of vaccine available for the first phase, Phase 1a.

The second phase, 1b, will cover 6.1 million Australians including anyone over 70 years old, other healthcare workers, those with an underlying condition and high-risk workers like emergency services and meat processors.

It will also include indigenous people aged over 55.

The third phase, 2a, covers 6.6 million people including Australians over 50, Aboriginal and Torres Strait Islander people who are between 18-54, and critical high-risk workers. 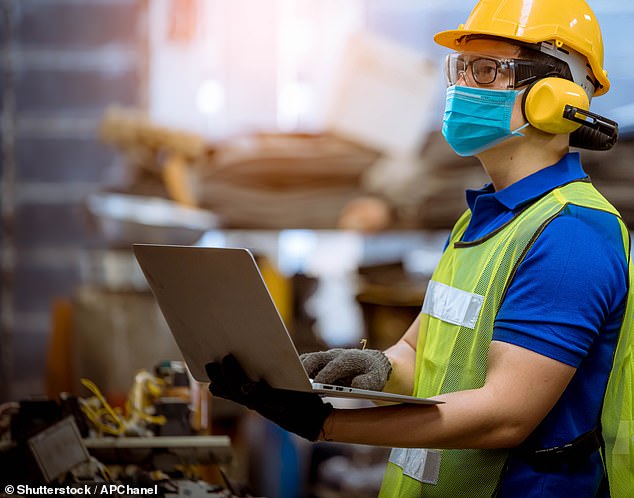 A factory worker checks production (stock image). Manufacturing along with tourism and education were flagged by business lobby group the Chamber of Commerce for priority 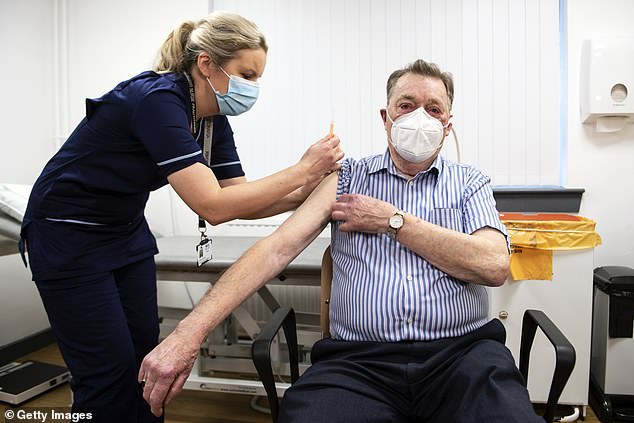 Business lobby groups are seeking to get their members prioritised for the vaccine. Pictured: A man in Scotland getting the Oxford jab

The fourth phase, 2b, covers 6.6 million people – the rest of the adult population, plus anyone from the previous phases that have been missed out.

There are up to 16 million vaccine doses projected for this phase.

The last phase, called Phase 3, will be for 5.7 million children if recommended with up to 13.6 million doses set aside.

The rollout of the vaccine is set to become more urgent as highly infectious new strains take over the pandemic overseas and increasingly threaten to break out in Australia at a time when restrictions easing due to low case numbers.

The Sydney Business Chamber has estimated the city’s CBD will reach 40 per cent capacity next week, when restrictions are expected to ease and workers return.

Similarly Melbourne’s CBD is expected to see 50 per cent of office workers back at their desks from Monday.